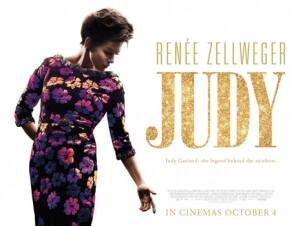 BASICALLY…: At the end of her career, Judy Garland (Zellweger) begins a series of concerts in London…

Everyone knows her as the girl who once sang about what lies over the rainbow, but Judy Garland’s life was anything but colourful. Plagued with physical and mental problems from an early age – her career began at the age of two – she suffered from drug and alcohol addition, married five times, constantly got herself in debt, and had her image manipulated by film executives that saw her as a product instead of a human being. She didn’t even make it to her fifties, dying from an overdose at the age of 47, the culmination of a lifetime in the spotlight.

Though her story is certainly tragic, Garland’s legacy retains the glitz and glamour she spent the majority of her life trying to give her loving fans around the world, which the new film Judy manages to capture in a bottle along with the underlying melancholy her otherwise chirpy manner hid so well. Garland fans will be wholly satisfied with the in-depth look at the legend’s final years, while general audiences will be taken aback by the raw emotion it presents, especially through one hell of a show-stopping lead performance.

Renée Zellweger, in her first major on-screen role since Bridget Jones’s Baby in 2016, portrays Judy in 1969, when she is a mere shadow of her former self; her wealth is virtually gone, her reputation has made her uninsurable, and she is desperately trying to retain access to her children during a custody battle with their father, Sidney Luft (Rufus Sewell). She ends up accepting a string of gigs in London, performing at the Talk of the Town venue and under the watchful eye of stern but sympathetic stage manager Rosalyn (Jessie Buckley), but her years of substance abuse and mental illness are slowly catching up to her, leaving the singer in a state of depression and anxiety that she seems to continuously be trapped in.

Though the primary focus is on Garland’s later years, we get glimpses into other aspects of her life, from her fling with young nightclub owner Mickey Finn (Finn Wittrock), the man who would become her fifth and final spouse, to scenes of a younger Garland (Darci Shaw) constantly being controlled by the powers that be in Hollywood, which would eventually shape her own destiny. Unlike other biopics like The Iron Lady or Bohemian Rhapsody, this one doesn’t fall into the trap of just being a quick Wikipedia recap of important life events crammed into one movie; instead, as the best biopics tend to do, it focuses on one period in the central figure’s life and uses dramatized life events as context for how they may be feeling in the film’s present. In this case, director Rupert Goold and writer Tom Edge – adapting from Peter Quilter’s stage play End of the Rainbow – are able to show us a seasoned Garland here, one that is scarred by years of insecurity and mistreatment, stemming from years of mistreatment at the hands of Hollywood players. Young Garland, for instance, is constantly being forced to take pills instead of enjoying a burger or a slice of cake, a way of life that we see has clearly shaped the Garland of 1969 who can’t seem to live through her day without downing some sort of medication or pill. It’s heartbreaking to watch this pure talent be treated this way, and even more so to learn how it has morphed her into this damaged person later in life, consequences which both Goold and Edge do not shy away from in their respective direction and writing.

The emotion is laid on thick here, and while Goold’s understated direction and Edge’s thoughtful writing contribute a large part of that, it’s Zellweger who’s the film’s undisputed champion. Delivering a performance unlike anything the actress has ever done before, she completely inhabits the role while making it firmly her own, foregoing mere impersonation in favour of a more complicated approach that truly gets to the heart of who Garland truly was. Always putting on a show, either in front of audiences or even her own children, the character’s levels of charisma are off the charts and Zellweger does incredibly well to match the larger-than-life persona that so many people were accustomed to seeing from her. It’s the more sombre moments of the film, however, that the actress gets to fully show her range; you feel for her as she sits quietly in her dressing room after a performance, and you weep as she comes face to face with some of the unavoidable problems she has to face. The character is humanised in great detail here, nowhere more so than a lovely extended scene where she accompanies two gay fans home for dinner, which the actress uses to highlight Garland’s underlying loneliness and a strive for connection in a world that has chewed her up and spat her out. Zellweger captures all of that with unnerving ease, and she delivers one of the year’s very best performances that will easily see her be in the conversation for the upcoming awards season.

The film is an emotional experience, and will probably hit home for many people who, like Garland in this film, suffer from depression of any sort. It deals with the star’s mental illness effectively while refusing to overlook some of its harsher consequences, including when it hurts the people closest to her, even herself. A rousing conclusion will probably have you on the verge of tears (once you overlook its slight corniness), and feeling almost every emotion under the sun for someone who, despite being most famous for singing about it, could never find joy over that rainbow.

Judy is an emotional account of the final years of Judy Garland’s life, with a firm focus on the aging singer’s battles with depression and substance abuse which are looked at in effective detail, and are put on full display thanks to a career-best performance by Renée Zellweger that deserves to be in the conversation during the upcoming awards season.

Want to decide what the movie’s like for yourself?
Check out Judy showtimes in London
via