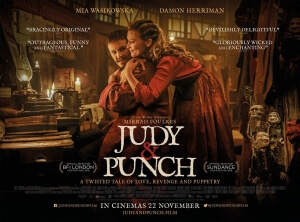 BASICALLY…: A pair of puppeteers (Wasikowska and Herriman) try to resurrect their show in a town on the brink of anarchy…

This review is of the cut shown at the BFI London Film Festival in October 2019 – the UK release date is currently listed for November 22nd 2019.

It’s been around for over 350 years, so it’s likely that at one point in our childhoods we sat down and enjoyed a Punch & Judy show. The classic puppet revue, traditionally shown on British seafronts nationwide, has become a staple in British entertainment, best known for its outlandish slapstick and silly voices in addition to the varying designs of the hand puppets, but only recently has the show drawn more and more irk from concerned critics. A lot of that comes from the idea that the show, in which the maniacal Punch is shown beating his wife Judy with a stick, makes light of and even promotes domestic violence, which considering that the target audience is primarily children makes it even more problematic in our more sensitive times. It’s little wonder why several schools and councils have called for the show to be banned, or at the very least altered to dial down the rampant abuse and be a bit more thoughtful about what it is showing to younger members of its audience.

In a smart move, first-time feature filmmaker Mirrah Foulkes turns the traditional story on its head in Judy & Punch, a revisionist take on the story that shows how messed up the themes are once you take puppets (almost) entirely out of the equation.

Set in the country town of Seaside (which, we are told, is nowhere near the sea), puppeteers Punch (Damon Herriman) and Judy (Mia Wasikowska) easily wow the locals with their marionette show. Punch is the showman of the pair, egotistical and hungry for the attention, while Judy is much quieter and seemingly content with letting her husband hog the spotlight. Things go south fast, though, when Punch slips further and further into alcoholism, leading to a disturbing tragedy which ends with Judy being battered, bruised and left for dead in the forest. While Punch is busy pinning the blame for his wife’s disappearance on his two kindly house servants – something that the people of Seaside, driven by their closed-mindedness and disregard for the ineffective justice system in place, is all too willing to accept – Judy is taken in by a “heretic camp” made up of mostly female members that have been cast aside by society, where begins a plot to seek vengeance against her bastard of a husband.

There are traces of Monty Python in Foulkes’ vision, namely the satirical nature of how society in those times was completely and utterly ludicrous. The town is mostly made up of single-minded idiots, who are quick to demonise anything and anyone who might even hint at being different to them – a woman is sentenced to be stoned, a common practise in the town, for simply looking up at the moon for a very long time – and the ones who are significantly more level-headed, such as Judy herself and the kindly constable Derrick (Benedict Hardie), are either ignored or easily forgotten. Foulkes is quick to have us laugh at their idiocy, especially as Herriman’s Punch slowly starts to become just as dunce-headed as his peers, but also feel uneasy as their actions become increasingly fuelled by hate and prejudice; as she does in the classic puppet show, Judy suffers relentlessly under the misogynist watch of her husband, only with the puppets all but entirely removed it becomes a very uncomfortable display of domestic violence that you’re left with.

Her eye for satire as sharp as her visual style (often made to look and feel like you’re watching an actual Punch & Judy show with real people), Foulkes also uses her gifts to show the alarming imbalance of gender politics in the story. It’s not a coincidence that the majority of people in the “heretic camp” are female, many of them outcast for the mere crime of being doctors, being physically or mentally disabled, or just being caught in the wrong place at the wrong time, and Foulkes uses that to take the traditional Punch & Judy story in a completely different direction, one that has us not only rooting for Judy – traditionally depicted in the play as a nagging and unreasonable mare – but also the society which has caused Judy and the other women to live off the grid in the first place. Foulkes balances this out with a wickedly dark sense of humour that’s not afraid to go completely bonkers, with the movie even directly and intentionally quoting an exact line from Gladiator in one scene, and an entertaining climax which neatly wraps things up in a largely satisfying manner, as well as tie in neatly to the show that millions of children over the past three centuries will undoubtedly be familiar with.

At times strange and more than a little bonkers, Judy & Punch does a fine job of taking some of the classic traits of the show and remixing them into something that’s more modern and acceptable, which hopefully will make more and more people recognise the faults of Punch & Judy one you take away the puppet aspect of it all. Even if it doesn’t, it’s a solid romp that has no strings to hold it down.

Judy & Punch is an entertaining revisionist take on the classic Punch & Judy show, which not only flips the problematic qualities of the original but also has a fair amount to say about mob mentality and gender politics, all with a sharply satirical sense of dark humour.

Want to decide what the movie’s like for yourself?
Check out Judy & Punch showtimes in London
via