Judas and the Black Messiah (Review) – A Timely and Fierce Portrayal 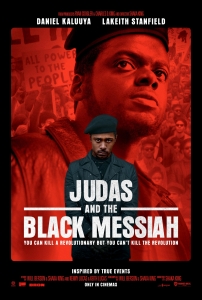 BASICALLY…: Petty thief William O’Neal (Stanfield) is sent undercover by the FBI to infiltrate the Illinois chapter of the Black Panther Party, and help bring down its leader Fred Hampton (Kaluuya)…

“A badge is scarier than a gun,” says a major character within the first ten minutes of director Shaka King’s powerful new film Judas and the Black Messiah. It’s a truer statement than ever after a year that has seen police brutality against black civilians cause more anger than ever before, culminating in worldwide protests and demonstrations demanding reform to the archaic and unquestionably prejudiced law system that freely seems to discriminate against people of colour.

King’s film is very of-the-moment, eager to point out the cruelty of those who have sworn to protect and serve, while also keeping its anger contained to the tragic story it is portraying, which is that of a man who was seen as a dangerous radical for merely inspiring his people to resist the white-dominated system, and the guy who was forcefully brought in to help usher in his ultimate downfall.

It’s a compelling, thought-provoking and powerfully told story told with fiery humanity at its hardened core, and a damn fine thriller that works extremely well as a tense and nerve-racking display of suspense on its own terms.

It’s Chicago in 1968 when we first meet our “Judas”, petty thief William O’Neal (Lakeith Stanfield) who’s busted for both stealing a car and impersonating an FBI agent, which comes with a pretty heavy prison sentence. However, he’s given an out by actual FBI bureaucrat Roy Mitchell (Jesse Plemons), so long as he does as he’s instructed, which is to join the local chapter of the Black Panther Party, which is being paid close attention to by the bureau under the orders of its director J. Edgar Hoover (in a rather xenophobic portrayal by Martin Sheen), and keep an eye on its charismatic deputy chairman Fred Hampton (Daniel Kaluuya), who is regarded by Hoover as a potentially dangerous figure that could unite Communist and anti-war demonstrators to further upset the status quo. Over time, O’Neal becomes instrumental to Hampton and his fellow comrades, eventually serving as a security chief for the Illinois chapter, and naturally his loyalties come into question when he sympathises more and more with Hampton and his party’s intentions.

The film comes with significant weight attached to it, for Judas and the Black Messiah is not just a timely and passionate call to attention for the brutal oppression of popular black figures both past and present – for further reference, by the time this movie begins, leaders such as Martin Luther King Jr. and Malcolm X have already been assassinated – but also a compassionate and deeply humanised story that takes a timeless narrative such as, well, Judas and the actual Messiah and morphs it into a compelling and smart tragedy grounded in almost Shakespearian drama. What King and co-writer Will Berson are able to ingeniously pull off here is portraying both O’Neal and Hampton not as (for lack of a better phrase) black-and-white good vs. not as good archetypes like the very title suggests, but rounded and fully-developed people who, in their unique ways, unwittingly become mere cogs in a bigger and bleaker system designed to work against them. Both main characters have their fair share of personality flaws and sometimes even their individual sense of morality are blurred by pure ambition, but deep down you can feel their uncontainable passion for their beliefs and causes burning thoroughly through, especially within Fred Hampton who, thanks to both sensitive writing and a towering performance by Daniel Kaluuya, delivers plenty of rousing moments that even had me almost rise up from my chair and cheer him on.

It is also great to see an actor like Lakeith Stanfield, an actor I’ve been a fan of since his memorable film debut in Short Term 12, become such a reliable and likeable performer over time that filmmakers have enough confidence in him to carry a big awards-worthy film like Judas and the Black Messiah without relying solely on its biggest selling point, that of Kaluuya and his sure-to-be-nominated turn as Fred Hampton. Likewise, Stanfield excels here because you can see etched across his face his character’s ability to quickly think on his feet – particularly in a scene where, under suspicion by members of the Black Panthers that he’s a “pig”, he’s asked to demonstrate his carjacking skills – but also a blossoming dedication to the cause he’s been sent in to survey, which of course puts him at odds with his own conscience more than half the time. A fiery ensemble supporting cast, from Project Power standout Dominique Fishback as Hampton’s speechwriter turned lover, to even Lil Rel Howery in a rare dramatic turn during a pivotal scene, eagerly compliment the two leads’ compelling screen presence which deliver some of the most vibrant and tragic movie scenes that I’ve had the pleasure of seeing over the last twelve months.

I should point out that I was very fortunate to have seen an advance online screener of this movie thanks to the team at the Warner Bros. publicity department, but somehow I feel like seeing this in a cinema would have made this viewing experience a whole lot better. Watching a movie like Judas and the Black Messiah on a laptop screen is fine enough, but there is something about this movie which demands to be seen on the biggest screen possible, which I’m aware isn’t really an option right now, but in an ideal world this would have played like gangbusters with a larger crowd of moviegoers, and I truly mourn the theatrical experience more than ever, especially when it’s preventing me from watching what is already one of the better movies I’ve seen so far in 2021 in the way that it really ought to have been (or might still be in the near future, in which case you’re damn right I’ll be there on opening day).

Judas and the Black Messiah is a compelling, timely and fierce portrayal of the tragic story surrounding Black Panther Party figure Fred Hampton, brought to life by exhilarating writing and direction from Shaka King, two towering lead performances by Daniel Kaluuya and Lakeith Stanfield, and a brutal but sensitive depiction of the monstrous actions committed by authority figures against black revolutionary figures.

Judas and the Black Messiah was scheduled for a UK release this month, but for now appears to be undated. In the meantime, click here to keep an eye on the official Film Distributors’ Association schedule for any updates regarding a future UK theatrical release.