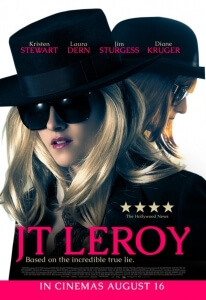 Author JT LeRoy has arguably the most bizarre backstory of any young author in recent history, especially seeing how he’s not even real. Initially a pen name for real writer Laura Albert, “he” gained an audience for provocative novels like Sarah and The Heart Is Deceitful Above All Things, but when the time came for “LeRoy” – described as a teenage boy with a history of drug and sexual abuse – to start making public appearances, Albert recruited her sister-in-law Savannah Knoop to portray her creation in the flesh, which she ended up doing for about six years until their cover was eventually blown.

This stranger-than-fiction true story serves as the inspiration for a new film about the deception, which certainly takes liberties with the actual events but is an interesting account of how this madness unfolded, told and certainly performed in an engaging manner worthy of LeRoy’s mysteriousness.

We begin as Savannah Knoop (Kristen Stewart) arrives in San Francisco, where her brother Geoffrey (Jim Sturgess) lives with his wife, Laura Albert (Laura Dern). Albert, by this point having already adopted the JT LeRoy guise by talking to people over the phone, soon convinces Savannah to start posing as her literary persona, and thus begins a whirlwind relationship between the two as “LeRoy” becomes a revered but shy author whilst Albert poses as “his” obnoxious British manager Speedie, and as Hollywood actress Eva (Diane Kruger) becomes eager to obtain the film rights to both direct and star in an adaptation of LeRoy’s book Sarah.

The film, co-written by Knoop herself and based on her own autobiographical book Girl Boy Girl: How I Became JT LeRoy, explores the deception from the perspectives of both Knoop and Albert, with the latter being a very larger-than-life character that outshines even her own fictional creation, and the former just kind of going along with everything, figuring out more about herself and her own sexuality in the process. In real life, Knoop identifies as gender non-conforming, and as we see this dramatized version of her younger self start to develop romantic feelings for both men and women, we also see how playing a boy ironically opens up a lot more personal experiences for her as a woman. Albert, meanwhile, is portrayed in a slightly more antagonistic light; she tends to be manipulative, using her natural charisma as a means to get people on her side of the argument, but is also prone to fits of jealousy when she sees Knoop as the very persona she created receive all the credit for her own writing. Both Kristen Stewart and Laura Dern are fantastic in their respective roles, each of them giving their characters a resounding amount of energy and pathos (Dern especially) that make them interesting people to watch, even when you don’t agree with some of their moralistic ideals.

It also takes some radical departures from the real-life story in certain areas, obviously done as a means to boost drama, but those who may be familiar with how the real JT LeRoy saga went down might find it slightly misrepresentative. For instance, the film adaptation of LeRoy’s book Sarah serves as a major plot line here, and we see the film in production as well as a premiere at the Cannes Film Festival; in real life, though, while a movie was certainly discussed and Albert was pursued for the film rights, it fell through when LeRoy’s true identity was revealed, and since Albert had signed a film option contract with production company Antidote Films under the false name, she was sued for fraud as putting a pseudonym on the contract meant that it was null and void. Albert was eventually ordered to pay nearly $500,000 in damages and legal fees to Antidote, but she also retained the copyright for her work in an out-of-court settlement, so it’s extremely unlikely we’ll ever see one of “LeRoy’s” stories on-screen. None of that really matters here, though, because the film never gets into any of that, instead putting all of its attention on a more fabricated depiction of those events which, again, is understandably done to insert more drama into the proceedings, but it might not satisfy everyone hoping for a more straightforward version of what really happened.

The film remains entertaining, though, largely due to the fascinating story that’s being told on-screen, albeit with some notable liberties being taken, and the two great lead performances by Laura Dern and Kristen Stewart (on that subject, sorry to go off on a brief tangent, but regarding Stewart, can we please stop with the cynicism around her acting abilities, simply because she was for a brief period in time associated with the Twilight series? Yes, the character of Bella Swan was poorly written from the get-go, but none of that was ever the actress’s fault; she just portrayed the character exactly how it was intended, for better or worse, and if anything it proves even more what a great actress she is, because she did manage to find a way to bring such a terrible character to life in some sort of memorable way. Movies like Personal Shopper, Clouds of Sils Maria and now JT LeRoy are far better uses of her talent, but to say she sucks as an actress just because she played a character nobody likes is really unfair on her part).

Anyway, back to this film, I’d say it’s worth checking out, because it’s an interesting film about a very interesting true story.

JT LeRoy takes the fascinating true story of the deception surrounding the titular fake author and turns it into an entertaining, if not entirely true to life, comedy-drama that’s elevated by two strong lead performances from Laura Dern and Kristen Stewart.

Check out JT LeRoy showtimes in London
via