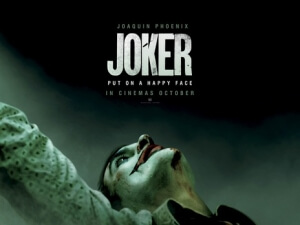 BASICALLY…: Arthur Fleck (Phoenix), a failed comedian that’s disregarded by society, begins to turn to a life of crime…

At last, the latest movie that Twitter has gotten so worked up over has arrived. From the moment it debuted to strong reviews at the Venice Film Festival (where it would go on to win the Golden Lion), users of the social media platform were quick to condemn Joker for its sympathetic portrayal of a mass murdering psychopath, claiming that it could potentially inspire a real-life case of violence from someone who also feels disregarded by society. Keep in mind, though, that the vast majority of fuel for this “controversy” came from people who, unlike the critics, hadn’t actually seen the movie yet, and are the same people who tried to previously bring down Green Book for its light approach to racism, or get angry that the Game of Thrones finale wasn’t what they had envisioned in their minds.

I have a feeling that when people finally get a chance to see Joker, it will be the same as any Film Twitter outrage: the movie will come out, people with either love it or hate it, and in a few months they’ll move onto the next thing to get outraged by. It’s a growingly dumb cycle, and it overshadows the fact that most of these films at the centre of the conflict are actually pretty good movies. Green Book fit this mould, and now so does Joker, a movie that might not be without its flaws, but is a fascinating dive into the dark and disturbing nature of one of comic lore’s greatest villains.

Joker takes place in 1982 Gotham City, where the streets are filthy, buildings are in bad conditions, and both crime and government neglect are heavily prominent. Among the citizens in this dump of a city is Arthur Fleck (Joaquin Phoenix), a clown-for-hire who has a pretty miserable life; he’s constantly berated and abused by nearly everyone he encounters, he’s looking after his elderly mother (Frances Conroy), and he suffers from a mental condition that causes uncontrollable laughter. Nonetheless, he has ambitions to become a stand-up comedian just like his idol, talk-show host Murray Franklin (Robert De Niro), but when his harsh environment begins to push him to his breaking point, he begins a dark, unforgiving path to become the classic villain we all know as The Joker.

A supervillain origin story is surprisingly hard to come by – unless you count original movies like Megamind and this year’s Brightburn – which is one of the many things about this movie that feels like a fresh addition to our oversaturated superhero market. By taking the most iconic bad guy from Batman’s catalogue of villains, and not only giving him his own story but telling it in such a bleak, unpleasant and adult manner, director and co-writer Todd Phillips finds a way for his film to stand out from the rest, especially with a character that has been portrayed on-screen as much as Batman has. Not since The Dark Knight has a movie set in Gotham City felt so frighteningly real, and what Phillips does so effectively here is to show every piece of filth in every one of its corners, creating a Gotham that feels lived in but also pretty rancid at the same time; bins are overflowing, homeless people lie in the streets, and there’s even talk of “super rats” dominating the sewers. Not even the politicians seem to care, with even mayoral candidate Thomas Wayne (Brett Cullen) eagerly voicing his disdain for the majority of Gotham’s financially-deprived mob. How this effects Arthur Fleck’s journey into (continued) madness is sharply detailed, if at times a little too obvious; his psychiatric support is suddenly cut off due to lack of government funds, and with nobody around who’s sympathetic enough to listen to his problems, he’s left to his own devices that soon spiral out of control for someone who’s already on the edge. It’s easy bait for critics to comment on its parallels to our own economically troubled times, and it’s not as subtle as Phillips perhaps thinks it’s being, but the fact that it’s there at all in this comic-book movie about a psychotic killer clown makes it at least worth talking about.

What should also be a major talking point about this film is how Joaquin Phoenix is utterly captivating here. The actor completely nails the creepiness of his character, inspiring unnerving feelings from just the smallest of tics and expressions, and as the movie goes on you can feel this person slip further and further over the edge, because the actor gives such an intimidating performance that you can see exactly where and how his sanity is breaking before our very eyes. It’s utterly pointless to compare him to other portrayals of The Joker, because like the movie itself it’s a performance that completely stands on its own with the Batman lore barely, if at all, playing into it at all. Instead, Phoenix’s version of the character takes heavy inspiration from Travis Bickle and Rupert Pupkin from Taxi Driver and The King of Comedy respectively, films which the movie itself also pays heavy homage to in scenes (right down to the fact that Rupert Pupkin himself, Robert De Niro, is playing the Jerry Lewis equivalent here), but Phoenix puts enough of his own spin on the character to prevent his Joker from being just an empty mimic of Martin Scorsese characters. He easily gives one of the year’s most unnerving performances, and unless the movie gets too bogged down by its Twitter “controversy” then it’s likely we’ll see his name be announced come Oscar nominations morning.

Going back to that whole Twitter thing for a moment, it’s easy to see why people would be upset over this film. The movie is a very gritty and violent take on a classic supervillain, and the concerns that it could inspire real-life violence are indeed valid, but it’s no more disturbing than something like Taxi Driver; in fact, compared to that movie, the violence and themes of social isolation in this film feel pretty safe and toned down. It largely feels like a big overreaction, again coming from people who hadn’t even seen the movie yet but based their concerns on hearsay, and unless this movie does indeed cause someone to commit a violent act then it’s not worth getting so mad over. However, at the same time, it’s understandable why anyone would come out of this movie not liking it; the violence as well as its cynical view of the world might prove to be too much for some people, and there are moments where it goes perhaps a little too far in its symbolism and lack of subtlety, which some might see as being too full of itself or overly nasty. I didn’t necessarily have those problems with this film, but if anyone came up to me and listed all the reasons why they did not like it, then I would be completely sympathetic to their opinion (as long as they don’t berate me or other people for liking something that they don’t).

Whatever its controversies may be, Joker remains a very watchable drama with smart uses of its classic comic-book setting and, of course, a great performance by Joaquin Phoenix as the titular character. It will not be for everyone, but for those wanting a gritty, bleak and adult comic-book movie then this is a film you can’t afford to clown around with.

Joker is a dark and disturbing, but effectively told, new take on the classic comic-book supervillain, with director Todd Phillips making effective use of the filthy and derelict Gotham City to assist the lead character – played marvellously by an intimidating Joaquin Phoenix – on his bleak path to becoming the Clown Prince of Crime, but its disturbing tone is bound to not sit well with everyone.

Want to decide what the movie’s like for yourself?
Check out Joker showtimes in London
via