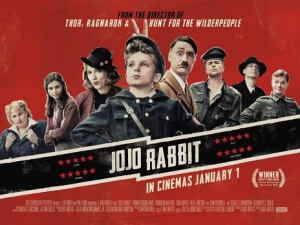 BASICALLY…: A young boy in Nazi Germany (Davis) begins to question his blind patriotism when he discovers his mother (Johansson) has been hiding a young Jew (McKenzie) in their home…

Despite general acclaim from audiences – it even won the Audience Award at the Toronto Film Festival, which is traditionally a strong indication of what will be nominated for (or even win) the Best Picture Oscar – Taika Waititi’s anti-hate satire seems to have divided critics somewhat. Some see it as a humorous and provocative look at Nazi Germany, while others see it as an unfunny and one-note film that rather uncomfortable to watch.

Though I personally belong to the former camp – and you can read why exactly in my first review for the film, written when I saw it at last October’s BFI London Film Festival – I think it’s interesting to examine why this film is causing such a divide, and if there are some legitimate concerns that this movie raises about its subject matter and its handling of said subject matter.

First, a refresher of the plot; set in Nazi Germany towards the end of the war, ten year old Jojo Betzler (Roman Griffith Davis) is an active member of the Hitler Youth, with a huge adoration for Hitler and his policies – so much so, that Hitler himself (Waititi) is also his imaginary friend. His world is rocked, however, when he discovers that his mother Rosie (Scarlett Johansson) is hiding a young Jewish girl named Elsa (Thomasin McKenzie) in their home. As he starts to grow closer to Elsa, he also begins to wrestle with his inner Nazi as he begins to realise that Jews are not as insidious as he’s been taught to believe.

The main talking point surrounding this film has been its comedic approach to the Nazi regime, and how it seems to trivialise a very dark period in history by not taking things very seriously. I’ve seen critics argue that the light-hearted take on Nazis is wildly offensive, not just because it’s making light of a regime that brutally killed millions of Jews and minorities alike, but also because it undermines just how serious it all was. My two cents is that while Nazi Germany was undoubtedly one of the most evil eras in human history, the sheer insanity of its practises are and always have been ripe for parody, and what Waititi does well with this film is that he allows you to certainly laugh at some of the out-there methods that the Nazis use to try and win the war, but to also step back and let the harsh reality leave its mark. When a major tragedy befalls a character, the film stays on that moment for as long as it needs before gently finding its way back to comedy, in a bold method that shows you can feel true heartbreak and also some huge laughs in a manner of minutes, all centred around something which in reality was anything but humorous.

This also ties in to how Hitler is portrayed in the film, introduced at first as a comforting and supportive imaginary friend to the main character, which again has inspired discourse amongst some because to them, it seems like this movie is trying to get you to sympathise with Adolf Hitler. In this case, context is everything; while it is true that this is a very light-hearted and even friendly incarnation, the important thing to remember is that he is the figment of the imagination of a young child who has become indoctrinated with Nazi propaganda, so why wouldn’t someone who looks up to the Führer as much as this kid imagine Hitler to be kind-hearted but also a little silly? In another clever turn on Waititi’s part, as Jojo gets closer to the young Jew Elsa, his Hitler starts acting like, well, Hitler, in that he is screaming hateful speech like the real Hitler did at one of his rallies, and becoming less of the fun-loving man-child that he was initially introduced as. From that, I feel that people who have that criticism about the movie perhaps didn’t dive as deep into the context as they probably should have, because by the end you are definitely not rooting for Hitler, no matter how cuddly and cute he seemed to be at first. Besides, many other filmmakers have satirised Hitler plenty of times in the past, most notably Charlie Chaplin in The Great Dictator or as recently as Quentin Tarantino’s Inglourious Basterds – even Donald Duck poked fun at the Nazis in one of his cartoons – so what Waititi is doing here is no different to how they did it back then.

When it comes to depicting Nazis in movies, especially in light comedies such as this, it’s important to acknowledge the true horrors that they inflicted upon the world, and to shy away from that is to discredit everything that millions of soldiers ended up dying for. Perhaps this is why some people are so against this movie, because they see it as nothing more than a cheap shot at a hateful regime that, in their eyes, cannot be made funny whatsoever. Although they are more than entitled to that opinion, I do not agree with them; I found this to be a funny, charming and incredibly sweet movie that knew when to hold back on its humour when some very heart-breaking events occur, but also has plenty of fun pointing out the sheer insanity of the dying days of Nazi Germany, which it does while also acknowledging how brutal and harsh the whole thing was. It will certainly not appeal to everyone, as this review as continuously pointed out, but a comedy about Nazis and an imaginary man-child Adolf Hitler was probably never meant to in the first place.

Jojo Rabbit is a funny, charming and incredibly sweet movie that has its heart in the right place, but the light approach to Nazis and its depiction of a comforting Adolf Hitler is bound to turn off some people, although when you look closer at what director Taika Waititi is going for then all of that starts to make a little more sense. It’s not for everyone, but it is definitely worth talking about at the very least.

Want to decide what the movie’s like for yourself?
Check out Jojo Rabbit showtimes in London
via