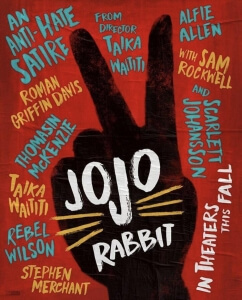 BASICALLY…: In the final days of Nazi Germany, a young boy (Davis) discovers that his mother (Johansson) is hiding a young Jew (McKenzie) in their home…

This review is of the cut shown at the BFI London Film Festival in October 2019 – the UK release date is currently listed for January 3rd 2020.

Nazis are very, very difficult to make funny. That’s not to say it’s impossible – just ask the likes of Charlie Chaplin, Mel Brooks, Roberto Benigni and even Donald Duck – but when you’re depicting one of the darkest eras in human history in a more comedic light, it’s a thin line to cross because, at the end of the day, Nazism was still a movement that discriminated and butchered millions of people, and you risk looking crass and tasteless if you lean too heavily on the jokes with all of that grim historical context.

For Taika Waititi, it’s a line he’s able to walk across without leaning too heavily onto either side. In his anti-hate satire Jojo Rabbit, the self-described “Polynesian Jew” is more than eager to poke fun at one of the most evil regimes of all time – as well as its leader Adolf Hitler, whom the writer-director also portrays in the film – but is sensitive enough to still highlight the grim realities surrounding it, as well as confront the horrific indoctrination of young German children into a mindset of pure hatred. It’s definitely a dark comedy, but also a rather sweet one too, complete with Waititi’s trademark oddball sense of humour.

Set in Nazi Germany towards the end of the war, young Jojo (a remarkable turn by debuting young actor Roman Griffin Davus) is eager to serve his country and please the Führer, who also happens to be his imaginary friend (Waititi). His loyalty to the regime is tested, however, when he discovers that his mother (Scarlett Johansson) is hiding a young Jewish girl named Elsa (Thomasin McKenzie) behind the walls of their house, whom at first he is horrified by thanks to the anti-Semitic propaganda drilled into his head, but soon grows to care for her which makes him question everything he’s been led to believe.

If you’ve seen any of Waititi’s previous films, from indie fare such as Boy, Eagle vs Shark and Hunt For The Wilderpeople, to more high-profile projects like What We Do In The Shadows and Thor: Ragnarok, then you kind of know what tone you’re in store for with this film. From the very first scene onwards, the quirky humour is present and correct, with Waititi’s penchant for matter-of-fact dialogue and spot-on comedic timing being very apparent. He also injects a lot of life into the many eccentric characters, ranging from Sam Rockwell’s morally ambiguous Nazi captain to Rebel Wilson basically playing an SS version of herself, to of course Waititi himself as Hitler, who steals every single scene he’s in with his man-child persona (which makes sense here because, keep in mind, he is a figment of this young boy’s imagination). It’s more or less what you’d expect from a Taika Waititi film by this point, which isn’t a bad thing by any means because he is a very funny actor and filmmaker who can easily find the right amount of laughs in nearly everything he does, and Jojo Rabbit sits comfortably as another solid comedy from the man.

It is, however, by far the darkest comedy he’s made yet. Again, this is still Nazi Germany he is dealing with here, and while he succeeds in finding many ways to ridicule their practises – in one scene, it turns out that saying “Heil Hitler” to several people individually is a lot more frustrating than it seems – Waititi does not shy away from how bleak this place could be. Hateful propaganda is plastered onto walls, Hitler Youth members are encouraged to burn books and throw explosives at the unseen enemy, and most disturbingly hanged corpses are put on display throughout the town; as funny as this movie can be, these matters are deadly serious, which is something that filmmaker realises enough to stop himself going too far. As the film moves along, events happen that make the landscape seem even bleaker, and it’s sometimes hard to know when to laugh or be appalled by the sheer lack of humanity shown on the screen.

It comes around, though, with an incredibly sweet story at its centre. The personal crisis that young Jojo goes through when he encounters the pretty young Jew in his house leads to them forming a bond that has a lot of heart to it, and both Roman Griffin Davis and Thomasin McKenzie share a lovely chemistry that makes their unlikely friendship seem all the more believable. It leads to the film’s overall message about embracing love over hate, which some could certainly argue feels like a very obvious message, but when you consider how much hate has been spread in our current political climate, in ways not dissimilar to how Hitler himself spread hatred for Jews back in the day, the more you realise that this incredibly obvious message is one that we sadly need to be reminded of yet again.

Who’d have thought that one of the sweetest films to emerge from the film festival circuit would be a film where an imaginary Adolf Hitler acts like a total man-child?

Jojo Rabbit is a very funny dark comedy that equally pokes fun at and highlights the bleaker sides of Nazi Germany, with Taika Waititi’s signature brand of humour shining through as well as its very sweet nature.

Want to decide what the movie’s like for yourself?
Check out Jojo Rabbit showtimes in London
via