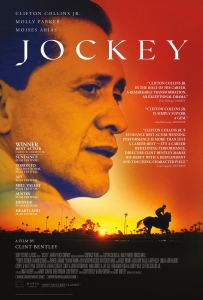 A year ago, at the 2021 edition of the Sundance Film Festival, all the buzz was surrounding one film, and one performance, in particular. Jockey, directed and co-written by feature first-timer Clint Bentley, was gaining serious traction amongst festival audiences for lead actor Clifton Collins Jr.’s outstanding turn, enough for many to declare him an early frontrunner for a Best Actor Oscar, if not a safe bet for the final five nominees. Flash-forward to a year later, however, and the tables have significantly turned; whatever buzz may have been placed upon the movie is now muted at best, thanks to an under-the-radar theatrical release that saw the movie gross only $2,789 from three locations in its opening weekend (which, even for pandemic times, is pretty rough), and a lowly awards campaign that has yet to pip current frontrunner Will Smith from the top spot, or even come close to cracking that top five.

There are a multitude of reasons why Jockey has so far failed to live up to its initial hype – for one, perhaps this is a movie that could have benefitted from a wider Netflix release instead of theatrical? – but what you cannot take away is that this is a pretty damn good movie that does deserve some kind of attention, especially towards its utterly magnetic lead.

Collins Jr. plays Jackson Silva, a 50-something jockey who’s been on the horse racing circuit for a number of years, and is determined to keep going for as long as he can, since it’s basically the only thing he knows how to do. As he goes through the motions of preparing for the upcoming season, he faces a number of personal challenges from experiencing more and more side effects of his deteriorating health, to the arrival of a younger jockey named Gabriel (Moisés Arias) who, to his surprise, claims to be his son. The latter sparks Jackson to reflect on his own legacy as the season gets underway, which may well be his last if he so chooses to finally throw in the metaphorical towel.

There is a strong vibe of Darren Aronofsky’s The Wrestler to Clint Bentley’s film, as we experience the lowly and often dangerous world of the jockey where swapping stories about near-death experiences form casual conversation topics, as well as the gritty, handheld camerawork which adds to its naturalistic and underplayed tone. Bentley captures the chilled atmosphere within a seemingly-permanent magic hour glow that covers this entire racetrack, with a careful precision to its easy flow that almost makes it all feel like a lucid dream at times. Sometimes, the cinematography can be gorgeous and highly inventive – a zoom in on a character sleeping in a trailer suddenly flips a full 180˚ for the whole upside-down look – while at other times there is beautiful simplicity to some of the more static and less impressive shots, which allow the audience to absorb so much more of the personal conflict we’re meant to be watching.

The structure is a rather loose one, which admittedly does leave most of the film without much of a solid focus at times. For most of it, we’re basically following the protagonist as he wanders from one scene to the next, with the core strands such as his budding friendship with this much younger jockey (who, again, may or may not be his actual offspring) and a relationship between him and Molly Parker as a horse stable owner occasionally feeling episodic in their progression. The vignettes we do get, though, are still engaging to watch because there is something in many of them that will keep the vibe ongoing, whether it’s some friendly dialogue exchanges or even glimpses of our main character in action, bonding with able-bodied horses and engaging in vigorous exercise rituals in order to stay in top physical shape. Almost inevitably, there are moments in Bentley and co-writer Greg Kwedar’s script where the drama is perhaps turned up to too high a heat, especially with certain revelations surrounding one major supporting character, but there’s still plenty left to keep you fully invested in the material.

Central to everything is, of course, Clifton Collins Jr.’s simply incredible lead turn. The character actor, who’s been in everything from big sci-fi blockbusters like Star Trek and Pacific Rim, to smaller independent fare like Capote and One Eight Seven, relishes every single moment of his rare lead turn with pounds of charisma and such a magnetic screen presence that you can actually feel the weight of him carrying this entire movie on his shoulders. Again, it’s easy to compare this warts-and-all lead performance to that of Mickey Rourke’s turn in The Wrestler, but Collins Jr. adds something extra graceful that easily forms the heart and soul of Jockey, as he does brilliantly to convince you of his character’s flawed but no less determined nature, enough to see why everyone around him regards him highly within this particular circuit. Nearly every frame of the movie features Collins Jr. in some form, and it’s welcome because this is easily the kind of loosely-structured script that could have fallen apart like a Jenga tower if a far less charismatic and dramatically able actor was cast in his stead. It doesn’t, thankfully, because the performance from this actor is so good that it’s almost a shame that it’s currently not being recognised more than it is.

Unless there is some 11th hour miracle that suddenly propels Clifton Collins Jr. much further into the Best Actor conversation, it looks like there is unfortunately little chance of seeing this performance be properly considered by the Academy this year. The movie itself is worthy of conversation anyway, for despite its loose nature there are plenty of strong moments to admire about it from the cinematography to the naturalistic direction and writing, but to overlook some seriously career-best work from a hard-working actor like Clifton Collins Jr. feels like a major missed opportunity to acknowledge not just a fantastic performance, but a body of work that has led to this one outstanding turn that, for a while, got everyone talking about whether it can make it all the way to the finish line.

Jockey is a soulful character study that boasts some impressive cinematography and direction as well as an inviting, if a little too loosely-structured, script that already makes it worthy of checking out, but it is Clifton Collins Jr.’s fantastic lead turn that deserves the most attention, even if it’s likely that the Academy won’t give it theirs.

Jockey will be released in cinemas nationwide on Friday 4th February 2022 – click here to find a screening near you!