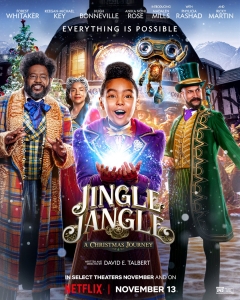 BASICALLY…: After a toymaker’s (Whitaker) most prized invention is stolen, his granddaughter (Mills) sets out to put things right…

It’s astonishing to think that nearly three years have passed since The Greatest Showman became a worldwide sensation, despite mixed reviews and an at-first mediocre box office (which slowly but surely grew more and more over the months). The film has since been credited with bringing original movie musicals back into the public consciousness – even though the far superior La La Land already did that one year prior – so much so that its eclectic and upbeat melodies have become just as popular as whatever’s in the Top 40 charts right now.

In that spirit, Netflix has sunk a lot of energy and whimsy into their own original musical, Jingle Jangle: A Christmas Journey, and it would be easy for any cynic to look at it as something created just to hop onto that particular bandwagon. However, it’s even easier to get lost in the charming and heart-warming story at play, and be sucked in to some cheery festive numbers that make it hard for anyone in the family to resist.

The film opens with a framing device as Phylicia Rashad reads her grandchildren the tale of Jeronicus Jangle (Forest Whitaker), a once-celebrated inventor and toymaker who lost his spark after his assistant Gustafson (Keegan-Michael Key) stole his inventions from him thirty years prior. Now a defeated recluse, his toy store now a pawn shop, Jangle is unexpectedly paid a visit one Christmas by his granddaughter Journey (Madalen Mills), who appears to be as bright and passionate as he once was, and soon discovers a long-lost invention of his that seems to operate on the power of belief. Now, if only Jangle can recapture the passion he once had, he can prevent Gustafson and his self-absorbed partner, a conscious doll named Don Juan Diego (voiced by Ricky Martin), from stealing the invention for his own gain.

Writer and director David E. Talbert, who is no stranger to Christmas movies having previously made ensemble comedies Almost Christmas and El Camino Christmas, encapsulates the magical feeling of the season with bright and colourful visuals, from the costumes to the sets and all the way down to the effects which vary from computer-generated to old-fashioned wire work. It’s visually pleasing, leaving you with a feeling as though you’re watching it in front of a fireplace on Christmas Eve, surrounded by patient children and adults who are weary of re-watching The Muppet Christmas Carol for the seventh year in a row (though what exactly would be wrong with that?). The story is engaging, and has plenty of sweet moments and likeable characters to carry itself through, while the songs themselves – co-written by John Legend – are top-tappingly fun to listen to with some great singers lined up to deliver some true belters (young Madalen Mills, for instance, has a particularly strong voice) – but most of all, it definitely feels like a Christmas movie, and it captures the joy and cynicism-free adulation one can experience during that particular time of year.

Does it, however, occasionally fall victim to over-sappiness? Sometimes it does, and a couple of heart-felt moments as well as some choice dialogue come across as rather treacly, as though they had been coined from the most sickly-sweet fortune cookie manufacturer in the land. It is also, perhaps, a little overlong; at just over two hours, you can feel things starting to sag around when things are just beginning to finally wrap up, and you wonder if it could have benefited from perhaps one less musical number. Those moments, however, are far and few in between, and the movie does do a good job at maintaining a consistent enough tone and a sense of charm to make those less effective moments feel earned as opposed to simply throwing them out there for the sake of it. The movie spends enough time on these characters to make you feel a great sense of empathy for them, even Keegan-Michael Key’s villain who, in a way, does make you understand why he does what he does early on in the film, and it’s not too forced or contrived for even the younger viewers to get behind.

Time will tell if Jingle Jangle: A Christmas Journey will indeed reach the same heights as The Greatest Showman within the public zeitgeist, but for now it’s a perfectly charming and readily entertaining Christmas musical that is bound to be a hit with families as we head into the festive season.

Jingle Jangle: A Christmas Journey is a sweet and charming Christmas musical with plenty of heart, toe-tapping songs, and a fair sprinkling of festive magic that is bound to enchant families all over the world, even if sometimes it can perhaps be a bit too gooey-eyed and overlong for its own good.

Jingle Jangle: A Christmas Journey is now available on Netflix.