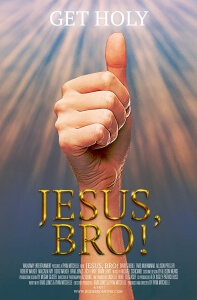 BASICALLY…: A popular Internet atheist (Gobble) has a near-death experience, and is brought back to spread the message of Christianity to his online followers…

“Religious movies are very in right now,” as a character in Jesus, Bro! accurately points out; films like God’s Not Dead, War Room, Old Fashioned and Kirk Cameron’s Saving Christmas have made a splash with faith-based audiences in the States, earning several millions of dollars at the box office and, in the case of War Room, have even made it to the #1 spot (albeit on its second weekend, during the notoriously slow final few weekends of summer, and with the lowest gross of any movie to make it to the top of the chart that entire year with just over $9 million).

However, the vast majority of them have been shunned by critics and audiences that aren’t exclusively of the Christian faith, largely for their one-sided views of atheism, their self-righteous persecution complexes, and basically being against anything and everything that isn’t somewhere in the Holy Bible. Two of those people, director Ryan Mitchelle and writer Brad Jones – the latter you may know as his popular Internet character The Cinema Snob – have been very vocal about some of these films in the past, arguing that they don’t hate the movies because they have a Christian agenda, but because they can be such hateful, woefully misguided pieces of filmmaking that nobody of any faith should be subjected to.

Luckily, they’re also talented comedians with an actual love for movies, so they’ve used this opportunity to create Jesus, Bro!, a parody film in the same vein as Airplane! and The Naked Gun that gleefully mocks the standard tropes of Christian movies, but also sets itself apart as not only a very funny and extremely amusing comedy, but a movie with a better message than a lot of the movies they are satirising.

The film is about a man named Rick (David Gobble), an atheist Internet personality who goes by the name “The Rickhead” and has a legion of online followers who listen to his anger-driven rants about how much he hates everything to do with religion. One day, however, Rick has a near-death experience and comes across the Holy Son himself – well, he’s actually more of a hybrid between Jesus and Santa, known as Santa Christ (Robert Walker) – who instructs him to go back and spread the good word, converting new followers in the process. With his newfound beliefs, as well as his best friend Carlos (Fard Muhammad), Rick goes on a crazy quest to fulfil Santa Christ’s wishes, coming across a host of interesting characters and scenarios along the way, which all test his faith in ways he never could have imagined.

Although its primary focus is on parodying the various tropes of bad religious movies – including, but not limited to, the clunky exposition, the cheesy musical score, some of the bizarre filmmaking choices (a scene in the film has characters hold mugs up to their mouths while dialogue that is blatantly dubbed plays over them, inspired by an actual scene from Kirk Cameron’s Saving Christmas) and, of course, scenes of people just playing with basketballs – it’s a movie that still manages to work even if you’ve never seen one in your life. The story is light-hearted and simple enough to follow, and the characters are very entertainingly written and portrayed that you’re enjoying spending time with them, even when they’re at their most cartoonishly over-the-top (again, in keeping with its original intention of parodying this particular genre). A lot of the jokes also land well, regardless of your prior knowledge of these films, as they’re so delightfully silly and sly that they’d get a good chuckle out of you from the smallest of sight gags to the wittiest one-liners. In short, it’s a parody movie that, unlike the more recent trend of Seltzerberg’s spoof movies just referencing whatever’s popular at the moment, actually has a genuine respect for the thing it’s making fun of, and is also actually funnier than the majority of them combined.

However, it’s also a movie with a good, strong message that most of the actual faith-based movies should take a cue from. The overall message of just being a decent person, whether or not you’re someone of faith, is genuinely uplifting and sweet, but it also leaves you more frustrated that movies like God’s Not Dead and War Room, which only serve to promote their Christian agenda without any regard to people of other faiths or those with no faith at all, don’t also say the exact same thing. Movies that belittle others for not having the same beliefs as them are morally rotten, and decisively not very Christian, because at the end of the day we still need to co-exist as a society of all faiths and ideologies, and films like those only serve to divide us even further, at a time where we need to stand together more than ever. Funnily enough, it’s the film that’s poking fun at all of these movies that has the higher moral ground than a lot of them, and it’s far better off for it.

Funnily enough, this week in the UK sees the release of another religious film, Kevin Sorbo’s Let There Be Light, a movie which from what I hear about it contains all the terrible attributes that Jesus, Bro! set out to mock, and then some; so folks, if there’s one movie you have to see this Easter weekend about a popular atheist who has a near-death experience and comes back to life a newly-converted believer in all things holy, please be sure to check this one out instead – I guarantee you, Jesus, Bro! has significantly less Sean Hannity.

Jesus, Bro! is a fun and often very funny parody of the current trend of faith-based movies, with funnier jokes than a lot of other parody movies lately and also a far better, far more Christian message than a lot of the films it set out to mock.

If you want to check out Jesus, Bro! for yourself, click here to rent or buy the movie on demand, or click here to purchase a DVD copy!

In the meantime, show writer Brad Jones some support by subscribing to Stoned Gremlin Productions on YouTube, following him on Twitter and Instagram (@thecinemasnob for both), and checking out his homepage here.