Jem and the Holograms (Review)

Jem and the Holograms (Review) 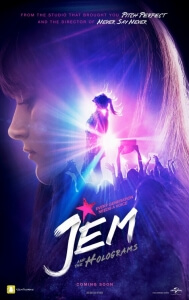 BASICALLY…: When she becomes an internet sensation thanks to her singing talents, Jerrica “Jem” Benton (Peeples) and her foster sisters (Scott, Kiyoko, Perrineau) become caught up in the limelight…

On October 23rd 2015, Jem and the Holograms (the big-screen version of the cult 80s cartoon show of the same name) debuted in over 2,000 screens across the United States – and then disappeared from every single one of them just two weeks later. It’s final domestic gross? $2.3 million, not even half of its $5 million budget, or even debuting within the top 10 at the box office (it wound up at #15, four positions lower than Pan in its third week of release, which just about says it all). It was not only the worst opening of last year, but it was also the worst opening ever for a film with such a wide release. To say that it was a complete bomb wouldn’t even cover it.

Its ultimate failing is part in thanks to the internet community, which banded together when they collectively realised that the film supposedly based on their beloved childhood classic had all but nothing to do with the source material, all based off of the trailers that were released (looking at the thumbs down scoring on the trailer’s YouTube page is a depressing sight in and of itself). The outrage was so severe, that boycotts were put in place by the most extreme of fans, resulting in a collection of empty cinema screens and the very title of the film itself becoming some kind of a cultural slur of the moment, up there with Fant4stic, The Road Chip and anything Adam Sandler attached himself to last year.

Reviews were no better – it currently stands at 20% on Rotten Tomatoes which, while not the worst feedback, was still pretty damning all the same, with many writers inevitably blasting it for its complete lack of disregard for the original series, as well as its own faults as a standalone movie. Certain audiences were slightly kinder, giving it a B+ score on market research site CinemaScore, although that certainly didn’t help its overall longevity in the cinema.

Not having the nostalgia for the original show that a lot of people had before going in – we hadn’t even heard of the show until Robot Chicken referenced it a few times a few years ago – we are genuinely seeing this as a completely separate movie in its own right, and it’s still pretty rubbish even as that. Playing like if Glitter had an Instagram filter, it’s as standard a rags-to-riches young girl band drama as you can get, and not even that infamous Mariah Carey vanity project would perhaps be as cynical as this film (though don’t mistake us, Glitter is still a masterclass in Hollywood cynicism). It ticks every box that seems to come with this type of film, from the evil manager (played like a panto villain by a pouting Juliette Lewis) to the band splitting up just so they can get back together not long afterwards to contract disputes guised as “action sequences” to a romantic interest for no other reason than just because the lead’s a girl and, y’know, she gotta have a hunk to suck face with by the time the credits roll; no cliché is left unturned, and it’s all the more dull because of that.

The film is structured like, and feels like, a prologue to another film about these people that somehow ended up being the actual film instead; every single detail, each plot beat, EVERYTHING could have so easily been summarised as an opening credits montage, much like how The Incredible Hulk recapped everything you need to know without having seen any previous incarnation, but for some reason director Jon M. Chu and writer Ryan Landels seem to be under the impression that they have more than enough material in just that prologue for a two-hour film instead of the film they were supposed to actually make. No wonder Jem fans are pissed off with this film, because this film that’s meant to represent the show and, by extension, its fans focuses on probably the least interesting part of the concept, and it’s frankly baffling that they think they can get away with something like this, especially when there’s as big a fan-base as there seems to be with the original cartoon that would be so angry in the process.

Regardless of how faithful it is or not to the source material, Jem and the Holograms is still a pretty bad movie; it’s completely drenched in Hollywood cynicism, constructed completely off of focus groups instead of genuine love and appreciation for the original Hasbro product, ticking off every rags-to-riches story cliché along the way, and playing it completely straight without even the courtesy of being self-aware. Is it the worst film ever made? No, not even close, primarily due to a couple of qualities (for example, the acting is completely fine for the most part, and you feel that these young actresses can be much better if they’re under the guidance of more competent directors and writers), but it’s definitely the trainwreck we’ve all come to expect from such the negative hype; more unambitious than any of the Transformers films (at least things actually happen in those films), but not as irritatingly awful as the G.I. Joe films – one of which Chu actually directed, so he has experience with Hasbro which makes this u-turn even more bizarre – it’s a complete mess wherever you place it on the chart, one where it’s more interesting to talk about the failure of the movie rather than the film itself.

Jem and the Holograms’ legacy as a complete disservice to fans of the cartoon and a pretty dull movie on its own is warranted, with its lack of ambition and intrigue replaced by an overwhelming sense of cynicism and manufactured emotions that doesn’t even equal a satisfying movie-going experience.