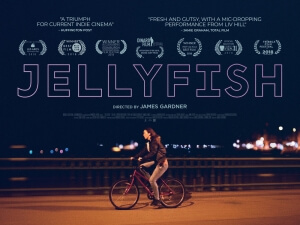 BASICALLY…: A young carer (Hill) discovers she has a natural talent for stand-up comedy, which becomes an unexpected outlet for her frustrations…

One of the things I enjoy the most about doing this website is that it allows me to find out about and see movies that would never, rather disappointingly, be seen by much larger audiences in their entire theatrical lifetime. Movies like Jellyfish, directed and co-written by debuting feature filmmaker James Gardner, are exciting little gems that I feel very fortunate to have checked out, if only so I can help spread awareness of their existence to people who have never even heard of it, but also because some of them turn out to be extremely worthwhile viewing experiences that I feel more people should make an effort to check out.

(And before I go on, I just want to say that this review is not a biased opinion, seeing how I was very fortunate to interview Gardner recently for this site – which you can check out right here, incidentally – because believe me, if I didn’t think this movie was at all worthwhile then I would never have gone out of my way to talk to the guy. It really is that good of a movie.)

Jellyfish is the story of Sarah (Liv Hill), a teenage girl living in Margate who doesn’t lead an idyllic life by any stretch of the imagination; she is forced to care for her two younger siblings as well as her bipolar, manic-depressive mother Karen (Sinéad Matthews), she’s being picked on at school, her obnoxious boss Vince (Angus Barnett) is giving her crap at her dead-end job at the local arcade which also sees her resort to giving handjobs to older men to earn a bit extra, and the council letters are beginning to pile up that threaten to cut off Karen’s benefits. Needless to say, Sarah’s frustrations can’t stay bottled up, and it’s something that her drama teacher Mr. Hale (Cyril Nri) encourages her to channel into a stand-up routine for the upcoming graduation showcase. As it turns out, she’s quite good at it, but her constant commitments to providing for her family threaten to ruin her chances before she even gets started.

This is actually my second viewing of the film – I was previously given a screener link by the film’s PR team in preparation for my interview with James Gardner – but I wanted to save the review for after I saw it in a cinema setting, because that’s where this film really is meant to be seen. As it turns out, that was a wise decision on my part because there are things about this movie that really stuck out to me on a second go that I either didn’t realise the importance of, or I just chose to focus on other things for my interview. One of the film’s most notable achievements in my book is its startlingly realistic portrayal of mental illness; Sarah’s mother Karen is an extremely aloof figure, clearly impacted by her rather severe case of bipolar disorder as she’ll be happy and joyful one minute – as though she’s yet another child that out main character has to look out for – but can go completely downhill the instant something goes wrong, resulting in a complete body shutdown that makes her teenage daughter drag her off to bed like a life-size ragdoll. The great thing about how this film portrays mental illness such as this, outside of Sinéad Matthews’ extremely complex performance, is that Gardner and co-writer Simon Lord really steer clear of making this character a complete caricature and actually make her a somewhat tragic figure; you can sense that there is some semblance of a good mother somewhere in her fractured psyche, but her overwhelming insecurities and complete inability to function in society – Sarah tells her that nobody would even hire her as a speedbump – have turned her into an even bigger child than her own kids, and the film is dead-on in how it handles the naïve selfishness of people not in the right frame of mind such as her, as well as the absolute devastation her lack of parental control causes for her children who need her now more than ever.

The film, though, largely focuses on the damning situations that the lead character continuously finds herself in, often as a means to provide some income for her fractured family, and a lot of that rests on the shoulders of its indomitable lead actress Liv Hill who is absolutely outstanding in a role that requires a lot out of her, from intensely dramatic scenes that see her act her little heart out, to moments of light relief as she’s coming up with comedy routines, to being involved in some very disturbing scenes later on in the film that must have required a lot of courage from her to enact in front of the camera, but I’ll be damned if she doesn’t nail every single one of these things and more. Gardner has found a true force of nature in his young lead, one that has the ability to be both funny and extremely sincere – sometimes all in the same scene – and who can easily carry a film like this on her shoulders, setting herself up to be a formidable rising star that should hopefully get a lot more work opportunities after people see her in this.

Gardner makes for a compelling debut filmmaker, beautifully shooting the movie on a very low budget which helps make the film feel a lot more grounded and real, and co-writing a script that has the power to be pretty powerful as well as wisely humorous even in its darkest moments. He’s made a strong first film that I hope more people get the chance to see, because it’s so rare that a movie like Jellyfish comes along that honestly deserves to be way above its position on the radar, and once again it’s great doing the things I do with this website as it gives films like this a way larger awareness than it’s probably already getting. Hopefully, this review will encourage you to check it out whenever you possibly can.

Jellyfish is an outstanding debut by first-time feature filmmaker James Gardner, who takes a number of very difficult subjects such as teenage carers and mental illness and injects a sense of light into its darker moments, which are propelled by compelling lead performances by astonishing lead actress Liv Hill and a scene-stealing Sinéad Matthews.

Click here to read our exclusive interview with the film’s director James Gardner!