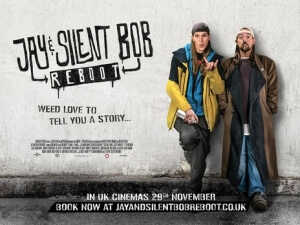 BASICALLY…: Jay (Mewes) and Silent Bob (Smith) head to Hollywood in order to stop a movie reboot of their Bluntman and Chronic comic characters from being made…

25 years on from his heralded debut Clerks, Kevin Smith has established one of cinema’s most devoted cult followings, and also a cinematic universe that pre-dates even Marvel. The “View Askewniverse”, as it is commonly known, consists of films like both Clerks movies, Mallrats, Chasing Amy and Dogma, all of which are connected by two unlikely but iconic characters: career slacker Jay and his mute “hetero life partner” Silent Bob, portrayed by lifelong friends Jason Mewes and Smith respectively. The pair appear in each entry of the View Askewniverse, even starring in their own 2001 vehicle Jay and Silent Bob Strike Back to further establish themselves as the glue that holds all of these films together, and have gone on to become underground icons of cinema with their instantly recognisable look and attitudes.

The pair’s second starring vehicle, Jay and Silent Bob Reboot, comes at a tender time for Smith; it is his first major film project since suffering a heart attack in early 2018 and subsequently shedding more than 50 pounds, so there is understandably more of a precedent to have a film like this reflect on growth and even mortality, because when you’re at death’s door suddenly everything starts to come into perspective. What Jay and Silent Bob Reboot does which not many of the duo’s previous adventures did was actually have the main characters develop as people and finally start to realise some of the responsibilities they must adopt, finally putting aside their childish mannerisms and actually focusing on something greater than themselves.

Before all of that, though, there’s plenty of Smith’s typical meta humour to dive right into, and the film will undoubtedly prove to be heaven for any devout Smith fan, and an amusing ride for anyone who’s not quite as familiar with this universe.

One of the people they also encounter is a teenage girl named Millennium Faulkon (played by Smith’s own daughter Harley Quinn Smith), the biological daughter of both Shannon Elizabeth’s character from Jay and Silent Bob Strike Back, and – in a shock turn of events – Jay himself. In a different time, this plot point would have mostly been played for laughs, with Jay’s frequent delinquency taking full dominance whilst Silent Bob just wordlessly nods along; but again, this is a post-heart attack Kevin Smith who wrote this film, so while that particular humour is still there he also takes the time to actually dive a bit deeper into the emotional consequences of Jay suddenly realising he’s a father. The biggest arc of the film is Jay actually taking responsibility for something in his life, in this case the teenage daughter he never knew he had, which in a way feels like Smith himself telling the audience that, while it’s fun to be so clueless and juvenile, it’s also important to actually grow up and accept that life has unexpected but also very important lessons that need to be learned. The emotional scenes between Jay and his daughter actually do work, because they are not only written and even acted well, but because of the knowledge that Smith nearly died after that heart attack it feels like there was a lot more poignancy and genuine heart poured into them from Smith himself.

While Jay and Silent Bob Reboot perhaps marks a major turn towards the direction of maturity and responsibility for the duo, it doesn’t forget that it is, at the end of the day, a Kevin Smith comedy featuring these two characters, and so there is plenty of his trademark meta humour to soak up as well as funny satire revolving around the current film trend of remakes and reboots. The fact that the movie itself is a reboot is referenced constantly, with particular plot points from Jay and Silent Bob Strike Back as well as many of the other View Askewniverse movies being brought up on several occasions, much of it done with Smith’s sly sense of humour that incorporates his extensive film knowledge – other movies like How High get called out, with that film’s stars Method Man and Redman even making cameos – and his keen self-awareness, with even Kevin Smith himself featuring as a character in the movie. Not all of the jokes land, and some go on for far too long, such as an extended Fred Armisen cameo that outstays its welcome, but when the humour is directed more towards the nature of reboots and Smith’s own willingness to send himself and his wide filmography up, it strikes a noticeable chord.

The experience of watching this movie is probably best if you have been with these characters across these films for the last 25 years, seeing Jay and Silent Bob get up to all sorts of troubles from Clerks to Dogma and beyond, and as someone who’s really only seen Clerks out of all of them, I could feel certain jokes and cameos go over my head. I still thought the film was amusing enough on its own, but I feel like if I had seen all of the other View Askewniverse films then it might have been a bit more of a momentous occasion for me. Either way, it’s a welcome return for Kevin Smith and these characters, and hopefully the sign of a fresh new direction for the filmmaker to take in a world that very nearly took him away from us, but realised he had plenty more to offer the world.

Jay and Silent Bob Reboot will undoubtedly play best with long-time fans of Kevin Smith’s filmography, particularly his View Askewniverse and his long-standing titular characters, but its amusing sense of humour and poignant heartfelt moments offer something a little more substantial to the audience, even if they’re not as familiar with Jay and Silent Bob as others.

Want to decide what the movie’s like for yourself?
Check out Jay and Silent Bob Reboot showtimes in London
via