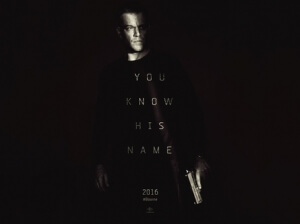 BASICALLY…: Missing sleeper agent Jason Bourne (Damon) resurfaces just as the world faces a new threat that only he can help eradicate…

When director Paul Greengrass and star Matt Damon made The Bourne Ultimatum, the third in the Jason Bourne film series based on the books by author Robert Ludlum, it was peak Bourne. Remembered for its breath-taking action, fast-paced editing and some impressive – if dizzying – camera work, the film also represented a satisfactory conclusion for the three-film arc of Damon’s Bourne trying to piece together fragmented pieces from his past. By the time Moby’s “Extreme Ways” led us into the closing credits, as it had done twice before, everything was wrapped up accordingly, and it seemed that the saga was finally over.

But then, as is custom with a hit franchise, Hollywood got greedy. When it became apparent that neither Greengrass nor Damon were initially willing to return for another outing, Universal hired series writer Tony Gilroy to direct a spin-off entitled The Bourne Legacy, which supplemented Jeremy Renner’s Aaron Cross as a replacement lead, and took the otherwise grounded spy series into straight-up science-fiction territory with plotlines involving genetic enhancement that belonged more in a Captain America comic than a Bourne movie. It was a mess, and its muted reception with critics as well as its mediocre box office performance eventually led to the studio learning the error of their ways, enticing both Damon and Greengrass back to the franchise at last.

But now having seen Jason Bourne, was it all worth it? It’s hard to say, as there are some parts that are fine, but many others that prove this particular series should have stopped at its peak.

Lazy title aside (seriously, there’s literally an entire library of Bourne titles like The Bourne Deception or The Bourne Retribution at your disposal, and THAT’s the one you go with?! Screw it, we’re just calling this The Bourne Resurgence from now on; who cares if Independence Day used that title already, at least it’s better than what we actually got), the film ultimately has no real reason for being, just like far too many of the sequels we’ve gotten this year so far. This one sees Damon’s Bourne being forced out of hiding in Greece when former associate Nicky Parsons (Julia Stiles) approaches him after she hacks into the CIA’s data files and steals encrypted information about several black operative task forces. Once more targeted by the CIA, most notably by its director Robert Dewey (Tommy Lee Jones) and fresh-faced agent Heather Lee (Alicia Vikander), Bourne globe-hops across several continents in an attempt to uncover a shady conspiracy at the heart of the CIA, while also avoiding a lethal assassin known as the Asset (Vincent Cassel), who may be linked to a key event in Bourne’s past.

If it sounds familiar at all to you, you’re not alone in thinking that; a large portion of Jason Bourne The Bourne Resurgence seems to borrow heavily from its previous instalments, from its action beats to its pacing to sometimes even entire scenes, without adding many new elements or even surprises to make it stand out. This is not a new fault with the series, because – as the recent Honest Trailers video pointed out – each film has been following the same beats over and over again, but with this one it feels more auto-pilot and by-the-numbers than usual, mainly because there is nothing really holding it together this time. From Identity all the way through to Ultimatum, Bourne was on a one-man mission to reclaim his forgotten past as a sleeper agent working for the CIA, a mission he more or less completed at the end of Ultimatum; essentially, Jason Bourne now has nowhere left to go in terms of character development, and so the events of Jason Bourne The Bourne Resurgence are merely an excuse to give him something to do to pass the time, rather than explore his character or story arc any further. As a result, although Damon is perfectly suitable in the role as always, the character ends up feeling like an accessory in his own movie, a blank slate with nothing left to accomplish, so all the action and highly intense scenes of shady corporate espionage are entirely bereft of weight or intrigue because not only have we seen them in all previous Bourne films already, but we are following a character who no longer has any real stakes in these events, which gives us little reason to care or connect with anything that happens. Say whatever you want about The Bourne Legacy, but at least that tried to do something a little different; Jason Bourne The Bourne Resurgence is just a “greatest hits” collection that’s been put on shelves for a quick buck.

Some things about it work fine; the action, though recycled, can be intense in parts, and as mentioned previously Damon is definitely trying to make the thin material work as best as possible. But for a Bourne film, especially after a thrilling and wholly satisfying entry such as Ultimatum, maybe “fine” just can’t cover it anymore. Audiences want something that challenge them in new and exciting ways, instead of being subjected to the same old tricks we’ve seen over and over, which is certainly a factor as to why so many of these sequels like Ninja Turtles or Alice Through The Looking Glass have all underperformed this year, both critically and financially.

Don’t be so surprised if Jason Bourne The Bourne Resurgence meets the same fate.

Jason Bourne The Bourne Resurgence re-treads too many of the plot beats and formulaic action scenes from the previous entries in the series, and the lack of anything holding it all together this time causes it to disappointingly become yet another sequel in 2016 that neither has a reason for being nor justifies its own existence as a compelling standalone movie.