Plan 9 From Outer Space. Manos: The Hands of Fate. Diana. 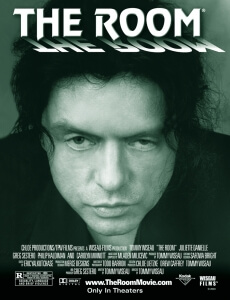 Yes, there have been some truly horrendous films over history. But none have become quite as infamous as the 2003 “drama” The Room.

Released in 2003 and directed, written and produced by star Tommy Wiseau, the film has spawned a cult following based off of its horrid production values, inconsistencies and awkward line deliveries. In fact, the film about successful banker Johnny (Wiseau), his unfaithful girlfriend Lisa (Juliette Danielle) and best friend Mark (Greg Sestero) has become SO popular that the film rights to its bizarre origins have been snapped up by none other than James Franco.

That’s right, the 127 Hours actor and one-time disastrous Oscar host has signed on to direct a film about the making of The Room after his production company Rabbit Bandini Productions optioned the new book The Disaster Artist, written by Sestero. The book goes into more detail about the production of the cult film, and the personal life of the near-reclusive Wiseau, providing enough meaty material to make an interesting film.

Franco, who is also co-producing the film, is rumoured to also play Wiseau himself, while his actor brother Dave Franco (21 Jump Street) may also be up for a part. However, it’s early days so no casting choices are solid just yet.

Seth Rogen and Evan Goldberg are co-producers on the project as well, with their production company Point Grey Productions receiving a distributor’s credit. Ryan Moody is adapting Sestero’s book into a screenplay.

If you’re curious as to what The Room even is, or why it’s so popular, we’ve included a couple of YouTube videos that give you a rough idea of how so-bad-it’s-good it really is. WARNING: they include major spoilers about the film, but then again that’s the fun in laughing at it. Enjoy!