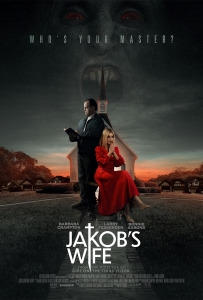 BASICALLY…: The dutiful wife (Crampton) of a local minister (Fessenden) discovers a new, and bloody, sense of power…

Barbara Crampton often appears to be overlooked as a leading example of the horror/thriller genre, in favour of more recognisable faces like Lin Shaye or Jamie Lee Curtis. With her leading turn in Jakob’s Wife, however, there’s no excuse to ignore her.

The actress, whose nearly forty years’ worth of screen credits include Re-Animator, Chopping Mall, You’re Next and the Puppet Master series, is on top form in director and co-writer Travis Stevens’ bloody and darkly comic look at middle-aged strife and female frustration… with an extra seasoning of vampiric gore for good measure.

In the film, Crampton plays Anne, the wife of small-town minister Jakob (Larry Fessenden). Once a wild and adventurous young soul, she has since settled for a quieter life of servitude, which hasn’t exactly made her happy despite her clear love for her husband. During a chance meeting with old flame Tom (Robert Rustler), who’s in town to look at the rundown mill for a potential fix-up, she ends up having a ferocious encounter with a mysterious figure, which leaves her visibly shaken, but also with a sudden new sense of power that’s been compressed for the thirty years she’s been married. However, this power seems to come at a heavy cost, namely the desire to feed on blood, and as Jakob struggles to find a way to return his wife back to normal, Anne begins to ponder if she even wants to go back to the way things were.

The film is as though Salem’s Lot stuck its fangs into the neck of a Mike Leigh kitchen-sink drama, since it is filled with plenty of middle-aged relationship drama and an equal amount of gushing blood. Jakob’s Wife entertains as both, with the former clearly being the smartest and most thoughtful aspect of the script, since it explores themes of empowerment and servitude, especially from the perspective of a woman who’s been expected to tend to her husband nearly all her life, and treats them with enough intelligence and dignity to feel profound in this otherwise humorous movie. You do feel for Anne even as she’s developing more and more monstrous tendencies by the minute, because you can see how decades of oppression in a marriage filled with undermining and passive-aggression has taken its physical and mental toll on her, with the great irony being that she had to effectively die in order to feel more free again. The strength of Barbara Crampton’s performance lies in how Anne remains a sympathetic character as she continues pursuing her deadly habits, in a devious twist on the female empowerment arc that, blood or no blood, feels relevant to any other middle-aged women also feeling trapped in a directionless life.

It doesn’t take too long for Jakob’s Wife to get to the gore that audiences want to see, and it delivers with some pretty gruesome violence that ranges from deeply sinister to full-on campy. A mixture of good practical effects and strong make-up lend to some chilling imagery, like a character being devoured alive by a crate full of rats (as though Ratcatcher 2 from The Suicide Squad suddenly decided to embrace villainhood), while also playing into its pitch-black sense of humour as the central couple bicker whilst disposing of her latest prey. There are also fun moments surrounding Anne’s newfound vampiric strengths and weaknesses, like having her mouth nearly burnt to a crisp by an ultraviolet teeth-whitening machine, all of which are again amplified by Crampton’s fiercely dedicated lead performance.

The pacing of the film does tend to drag, going by a little slower than it needs to and leaving the viewer a little confused as to what part of the story we’re currently at (what feels like it’s gearing towards the climax of the movie turns out to be somewhere near the end of the second act, with a whole twenty minutes left to go). This isn’t the kind of horror film that needs such a slow-burn approach, so it’s jarring to see it be gifted with one regardless, and it does make the film feel less sure of itself as a result.

If anything, Jakob’s Wife is worth watching just for Barbara Crampton alone. She is by far the best part of the movie, sharing strong chemistry with on-screen husband Larry Fessenden and holding nothing back in a performance that gets more and more outlandish as it goes along. The rest of the movie works well enough as both a vampire horror and a compelling middle-aged drama, but Crampton almost helps the decent material transcend to something even greater.

Jakob’s Wife is an entertaining starring vehicle for legendary horror actress Barbara Crampton, who shines in the lead role of a film that has fun with both its themes of middle-aged strife and its heavy vampiric gore.

Jakob’s Wife is now available to stream on Shudder.