Jack Reacher Sequel On Its Way

Jack Reacher Sequel On Its Way

When a film adaptation of Lee Child’s Jack Reacher literature character was in development, 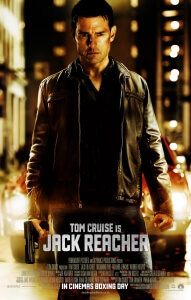 and eventually released as Jack Reacher late last year, audiences were outraged that the 6’5″ muscle-bound ex-military drifter was to be played by the 5’7″ superstar Tom Cruise. But that didn’t stop the finished film, written and directed by Christopher McQuarrie, from actually being rather entertaining and fun to watch, with even Cruise overcoming fan negativity with a decent performance.

And while Jack Reacher might not have been a huge financial success – $216 million worldwide on a $60 million budget – it still made a good amount, enough so to ensure that a follow-up is now  on its way.

Paramount Pictures and Skydance Productions will base the sequel on Child’s book Never Go Back, which sees Reacher returning to his old Virginia military base to have dinner with a female colleague who he learns has been arrested. Soon, Reacher finds himself being charged with crimes himself, and must learn the truth the way that only Jack Reacher knows how, which often means violence.

Writers are being sought after due to McQuarrie’s current commitments on the next instalment of Cruise’s other popular franchise, Mission: Impossible 5. However, it is hoped that McQuarrie will return to direct the Jack Reacher sequel after he’s finished with Ethan Hunt’s next adventure.

Cruise is also expected to return as Reacher, but again has Mission: Impossible 5 to film next summer as well as a number of other different projects lined up.

Either way, we can expect to see Jack Reacher back in cinemas at some point over the next few years…