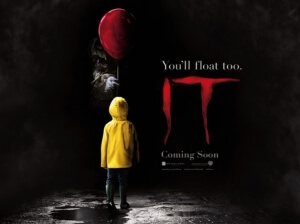 BASICALLY…: A group of kids are terrorised by an evil shape-shifting creature known as “It” (Skarsgård), which is responsible for the frequent amount of missing children in the town…

There are now surely two generations that will be scared witless by Stephen King’s epic novella It. The first was unfortunate to not only be saddled with the original book in 1986, but also the 1990 TV miniseries starring Tim Curry, which to this day continues to haunt people’s nightmares. Now, twenty-seven years on, a major two-part film adaptation of the 1000+-page book has debuted its first half (the second is yet to be filmed), and if history is set on repeating itself then expect plenty more young people to come out of this completely and utterly terrified – and also somehow uplifted because It is also a damn good movie.

This first half of the adaptation is set around when the main protagonists of the novel are kids, when in the summer of 1989 they come together after they encounter an evil, shapeshifting monster known as “It”, which likes to best guise itself as the fun-loving clown Pennywise (Bill Skarsgård). The “Losers Club” – called as such because they are all deemed outcasts in their community of Derry, Maine – include stutterer Bill (Jaeden Lieberher), who is still mourning the loss of his younger brother Georgie (Jackson Robert Scott) at the hands of Pennywise; Beverly (Sophia Lillis), the sole girl of the group whose home life might rival It’s wrath in terms of suckiness; overweight new kid Ben (Jeremy Ray Taylor); loud-mouthed jokester Richie (Finn Wolfhard); hypochondriac Eddie (Jack Dylan Grazer); home-schooled African-American Mike (Chosen Jacobs); and Stanley (Wyatt Oleff), the Jewish son of a local Rabbi. Together, they appear unstoppable against the evil demon’s plight, but whether it is enough to vanquish it for good is yet to be determined.

Originally meant for Beast of No Nation’s Cary Fukunaga to direct (though he still receives a writing credit), those duties have since been handed over to Andy Muschietti, the director of the 2013 horror breakout hit Mama, and while Fugunaka is a great director in his own right (between Beasts of No Nation, Sin Nombre, Jane Eyre and the first season of True Detective), it was probably a wise decision to give it to someone with perhaps a bit more experience in horror filmmaking, because Muschietti is able to deliver one effective scare after another here with considerable ease. Any scene involving Pennywise, and thankfully there are a lot of them, sends seriously strong shivers down one’s spine, not only because Muschietti directs his scenes with chilling emphasis on the character’s creepiness, but also due to Bill Skarsgård’s incredibly effective performance that makes him legitimately terrifying. Kudos to Tim Curry’s iconic performance in the old miniseries, but his Pennywise was more goofy and silly than it was scary, like an uncle who’s trying a bit too hard to make his nieces and nephews laugh; Skarsgård makes him seem like the most terrifying thing to anyone who isn’t even afraid of clowns, from his stiff and concentrated posture to the fact that his eyes never seem to blink, even using his own lazy left eye to horrifying effect. The monster takes many other forms, all of them earning the right amount of scares because Muschietti directs them so strongly that it’s hard not to even be a little creeped out by them, not least because some of them move like the freaky old-style stop-motion used in older cinematic horror movies, and other times blend practical effects with CGI almost flawlessly. In terms of scares, It easily outranks even the better horror movies so far this year like Get Out and Annabelle: Creation, and shows the much worse ones like The Bye Bye Man and Rings how it’s actually done.

It, however, is not just a horror film; it’s an oddly beautiful and touching look at childhood, one that delivers plenty of other emotions like laughter, sadness, anger, and even happiness which is a delightful surprise for a film that’s main objective is to scare the living daylights out of you. All the child actors are simply fantastic, creating some great chemistry with each other and also a serious sense of comradery, making you understand greatly why all of them are friends with each other. Scenes of them just bonding or messing around with each other are among some of the strongest in the whole movie, and even when faced with peril they look like they’re legitimately about to crawl up in a ball and die out of fear. There’s not a sense of falsehood about them, each one of them feeling completely genuine to the situation and in doing so making you seriously care whenever one or many of them are in danger of being killed by It in its many forms. Some will pick up on its similar vibes to Stranger Things, including its 80s setting and the fact that Finn Wolfhard plays one of the kids, but it manages to separate itself enough from the themes and genres of that show to be its own identifiable 80s adventure (plus, the adult rating lets them curse and be violent until the cows come home, which in and of itself is awesome for any kid-centric film made nowadays).

Even at an over two-hour running time, it’s never boring; from the first few minutes and the “Oh, shit!” first appearance of Pennywise, you’re completely hooked and desperate to know in what way it will all come together. This is not just a great horror movie, but it’s also just a great movie, one that you will want to see again just as soon as you finish it, if only to pick up on some of the other 80s-centric details in the background (posters for Gremlins on kids’ bedrooms, a local cinema advertising Batman and Lethal Weapon 2), and leave you wanting the yet-to-be-filmed second half pretty much immediately. Put simply, It is awesome.

It is a truly effective horror film and also a particularly strong movie about childhood, with scares that leave you legitimately terrified and a fantastic young ensemble cast that work great off one another. It floats.