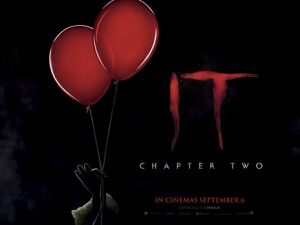 BASICALLY…: Twenty-seven years after first thwarting the demonic creature known as It (Skarsgård), the Losers Club reunites to destroy It once and for all…

The first part of director Andy Muschietti’s adaptation of Stephen King’s 1,000-page tome It was an enormous financial success two years ago, not only scoring the biggest US opening weekend gross for a September release with $123 million, but eventually becoming the highest-grossing horror movie of all time with just over $700 million worldwide. Due to that, in addition to the fairly high praise that the film received from both critics and audiences, there was heavy anticipation for the second half of the adaptation, which like King’s book would focus on the youthful protagonists as adults, and promised to deliver two-fold on the scary exploits of that creepy-as-hell clown Pennywise.

Nobody seems more excited for this movie, however, than the movie itself, which in a way is a victim of its own success; everything is bigger here, from the set-pieces to the running time (it clocks in at two hours and forty-nine minutes, only twenty-three minutes shorter than the 1990 miniseries which covered the entirety of the book), all while under the impression that it can do all of that because it has a lot to live up to. However, while the scope is certainly larger, that doesn’t mean it’s a better film than the first – it tends to get lost in its own sense of self-importance instead of actually being scary, and that makes it a lot more of a mess than the previous film. There is still very much an entertainment factor throughout most of it, but the heart and fun that made It: Chapter One (as I suppose it’s now called) so good is not as apparent here.

It: Chapter Two picks up twenty-seven years after the events of the first film, when the shapeshifting entity known as “It” – whose favourite form appears to be the demonic clown Pennywise (Bill Skarsgård) – returns from its slumber to once again terrorise the citizens of Derry, Maine. It falls upon Mike (Isaiah Mustafa in the present, Chosen Jacobs in flashbacks), the only member of the Losers’ Club to stay in the town, to call each one of the others and inform them that “It” has returned, and they must come back to fulfil the oath they made as kids to destroy It once and for all. They’re all leading very different lives now – stuttering Bill (James McAvoy/Jaeden Martell) is a successful writer who has a problem with endings, sole female Beverly (Jessica Chastain/Sophia Lillis) is a fashion designer who’s just escaped an abusive marriage, hypochondriac Eddie (James Ransone/Jack Dylan Grazer) is a risk analyst who’s still as neurotic as ever, Richie (Bill Hader/Finn Wolfhard) is a stand-up comedian, the formerly overweight Ben (Jay Ryan/Jeremy Ray Taylor) is now a slim and wealthy architect, and Stanley (Andy Bean/Wyett Oleff) seems well off but very quickly takes himself out of the equation. Nonetheless, they all reunite after many years apart and find a way to destroy It for good, before the demon can cause any more harm.

A common criticism for both the book and the Tim Curry-starring miniseries is that the part with the kids was far superior to the part when they’re all adults; I suspect that, for most people, the exact same will apply to both these movies, as It: Chapter One benefited greatly from the strong chemistry between the young co-stars as well as the fact that it was a no-holes-barred fright-fest with genuinely creepy imagery. It: Chapter Two, on the other hand, feels a lot looser and less focused than its predecessor, much to its detriment. Even with its plus-sized running time, it feels like there are vital parts to this story that are either missing or not explored that deeply, and after a while it instead becomes a repetitive series of jump-scare scenes rather than anything designed to further the development of any of these characters. The focus constantly shifts from the adults reminiscing about their days together as kids, to scenes that actually show them as kids hanging out together, but they’re so sporadic and sometimes out of nowhere that those parts – as nice as it is to see these young actors hang out on-screen together again – feel somewhat forced, as though they’re there because the kids were one of the many stand-out things about the previous film. Some plot strands even get lost in the mix, such as one where psychotic bully Henry Bowers (Teach Grant/Nicholas Hamiton) escapes from a mental institution and goes after the main gang, a sub-plot that stays off screen for so long that you actually forget it was part of the film at all.

The lack of focus really hurts the film because, unlike its much tighter predecessor, there’s so much stuff going on here that it’s either hard to keep track of it all, or you start to become a little bored by its overwhelming nature. Either scenario is understandable, but for me personally I wasn’t completely bored by it. While the running time is certainly longer than it ever needed to be, there were some entertaining things happening during that amount of time which, for the most part, made it feel like it was time well spent in this silly, nonsensical story. For one, Pennywise is still as menacing as ever, with Bill Skarsgård once again completely making the role his own, and whenever he shows up in full make-up it’s always a spooky delight. Out of the main actors, though, it’s Bill Hader who shines the most as adult Richie, as not only is he as funny as he always is, but he gets a few decent scenes to showcase some of his more underutilised dramatic talents, which work because he is a strong enough actor to pull them off. Everyone else, from bigger names like James McAvoy and Jessica Chastain to lesser-known ones like Jay Ryan and James Ransone, does fine enough, but most of them are let down by material which, once again, favours overdone jump-scares with questionable CGI than actually developing these people as definable characters.

If this movie had the same pacing, focus and even passion that It: Chapter One had, then this entire adaptation could have been one of the very best Stephen King translations ever put to film, but instead it’s two halves of varying qualities. You have one that’s tightly paced, legitimately scary, and has such a strong comradery between the young main characters that it generates a beating heart within the horror, but then you have one that’s a bit more full of itself, tries way too hard to recapture the same spirit but not quite getting there, and is a bit of a messy conclusion. To be honest, though, you could also say almost the same things about the book it was based on, or even the popular miniseries; one half was really good, the other not so much. In a way, it’s perhaps the most perfect two-part adaptation of Stephen King’s It there could ever be, as both movies capture everything that works about the original story as well as its flaws (with some exceptions – there’s no way in hell they’d ever be able to do THAT scene from the book), and simply puts it up on the screen for everyone to see, in all its clown-ish glory.

It: Chapter Two doesn’t reach the heights that the previous movie reached, as it’s a lot looser and much less focused for it to work as a coherent movie, not to mention an overlong running time that becomes way too indulgent and repetitive after a short while, but there are entertaining qualities about it that keep it from being a complete disappointment, namely the fact that Bill Skarsgård’s Pennywise is still a spooky and menacing presence that perfectly complements the rather goofy nature of this whole plot.

Want to decide what the movie’s like for yourself?
Check out It: Chapter Two showtimes in London
via