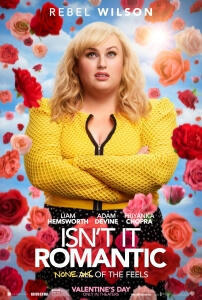 BASICALLY…: After a blow to the head, cynical Natalie (Wilson) finds that her life has suddenly become a romantic-comedy…

Parody movies have become rather toxic nowadays, thanks to the immature and aggressively unfunny nature of films like Fifty Shades of Black, Dracula: Dead and Loving It and just about any Jason Friedberg and Aaron Seltzer movie that pops into your head, which is a shame because there are some truly classic examples out there, whether it’s Airplane! or Spaceballs or The Naked Gun and others, that none of those would-be comedic talents ever seems to take true inspiration from. Those films, unlike the more recent – and now mercifully dead and buried – trend of just referencing whatever happens to be popular at the time even if has nothing to do with the main subject, actually put time and effort into every little joke from the classic one-liners to just the smallest details in the background, and not only were they funny but they also showed a clear admiration for the very thing they were parodying.

It’s somewhat refreshing, then, that Isn’t It Romantic – which takes its aim at the various clichés of the romantic-comedy genre – is definitely aiming for something far more substantial than dreck like Epic Movie or Meet The Spartans, and by actually putting effort into its craft it comes out as an amusing and generally likeable spoof of a much-mocked type of movie.

The film is about Natalie (Rebel Wilson, also a producer on the film), an architect in New York who makes it no secret about how much she hates romantic-comedies, from their repeated and stale clichés to the unrealistic ideas about true love that they lay onto their audience. However, when she suffers a nasty blow to the head during a mugging, she wakes up in a fancy hospital room and notices that everything – and I mean, everything – has suddenly changed; the sun’s always out, people are dressed in bright colourful clothing, her apartment has transformed into a luxurious penthouse, she suddenly has a gay best friend (Brandon Scott Jones), and her workmate Whitney (Betty Giplin) has suddenly become her mortal enemy. She soon deduces that she has somehow ended up in the very sort of romantic-comedies that she despises, and that she needs to follow the rules in order to get back to the real world; but to do that, she needs to find someone to fall in love with, and luckily she has not one but two potential suitors to choose from, including her dorky work colleague Josh (Adam DeVine) who is implausibly matched with a stunning model and “yoga ambassador” Isabella (Priyanka Chopra), and wealthy bachelor Blake (Liam Hemsworth) who is just too good to be true.

It’s fun seeing how much attention has gone into everything you see here to make itself look and feel exactly like a stereotypical rom-com, from the bright and chirpy cinematography to the sickeningly cheesy soundtrack throughout the whole thing – they play Vanessa Carlton’s “A Thousand Miles” at least a couple of times in this movie – which is made even funnier by how everyone bar Rebel Wilson’s character is just going along with it all, completely oblivious to how convenient and perfectly laid out this universe is. Some of the jokes about how certain scenes play out, such as one where Wilson is about to have sex with Liam Hemsworth only for it to then cut to the next morning without anything happening, are really well played out and executed perfectly through hilarious editing and good, focused direction. Even things that you see in the background, like extras on the amusingly clean streets of New York or the endless amount of cupcake stores and bridal dress displays, are ridiculous enough to get a chuckle, but luckily that’s always the film’s intent and more often than not it earns those laughs through its strong efforts, no matter how minor these jokes can be.

As wildly over-the-top as this fictional rom-com universe is, it needs someone with real-world comedic timing to react to all this crazy stuff, and luckily Rebel Wilson really goes for it and has an absolute blast trying to find her way through one cringeworthy cliché after another. As I mentioned earlier, she also produced the film, and it’s easy to see what attracted her to the project in the first place, with a lead character who seems about as perfect for her to play as much as everything else in this rom-com world, and she has plenty of fun with each little thing that comes her way, including an impromptu sing-and-dance number set to Whitney Houston’s “I Wanna Dance With Somebody” which, again, is straight out of one of those movies that the filmmakers clearly have a huge amount of respect for. In the supporting field, real-life knockouts Liam Hemsworth and Priyanka Chopra are also having a blast whilst playing around with their own images, and Adam DeVine – who of course has shared the screen with Wilson before in the first two Pitch Perfect movies – actually isn’t all that grating to watch in this one, which feels like a rare occasion (or maybe he’s been lined up to play so many obnoxious roles that to see him actually be likeable for a change is a revelation in and of itself).

Of course, there are times when this movie does fall into the trap of becoming the very thing it set out to mock, which for a movie like this is kind of inevitable, and whenever this happens it admittedly does defeat the purpose a little bit. But for the most part, you’re enjoying it enough to let those moments go and just let these people make you laugh by both mocking and paying homage to the romantic-comedy tropes we all know and love – if only more parody movies nowadays could be on this level.

Isn’t It Romantic is a fun spoof that lovingly pokes fun at several romantic-comedy clichés to largely funny effect, and having someone like Rebel Wilson in the lead really helps you enjoy its parody elements a lot more.