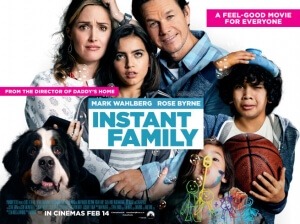 Sean Anders has mostly directed comedies that range from either forgettable (like Sex Drive and both Daddy’s Home movies) or complete and utter garbage (specifically That’s My Boy), but for his latest film Instant Family he’s reached into his own life for inspiration, and it’s resulted in his most genuine and heartwarming film to date.

In the film, Mark Wahlberg and Rose Byrne star as Pete and Ellie Wagner, a couple who decide to become foster parents to fill a void in their lives. They are soon matched with three siblings – teen Lizzie (Isabela Moner), middle son Juan (Gustavo Quiroz) and youngest Lita (Julianna Gamiz) – who have been in the system since their biological mother started using drugs, and their previous experiences have led them to develop very troubled personalities; Lita has behavioural issues, Juan is extremely apologetic, and Lizzie is holding out hope that her mother will soon come back into their lives. At first, Pete and Ellie feel challenged by this sudden change in their lives, but soon they find it within themselves to help the children become much more stable and become a family.

While the story and characters are largely fiction, Anders injects a little bit of his own experiences into it; he and his wife similarly fostered three children who they later adopted, and in interviews he has been open about how with this film he wanted to show that such a process can certainly be difficult but also extremely rewarding, because it gave him and his wife a chance to give children the chance to lead a normal and healthy life that they probably wouldn’t have otherwise been able to have. Though it has a couple of pitfalls such as a slightly inconsistent tone and moments where the comedy aspect isn’t really needed, Instant Family absolutely has its heart in the right place as it’s made by someone who clearly wants to tell this meaningful story on the big screen while also making us legitimately want to laugh along and bond with these characters and situations. Anders accomplishes this with a humorous but thoughtful script co-written by regular writing partner John Morris, which doesn’t gloss over some of the harsh realities about the foster system, including how some children later in life tend to start doing drugs as a means to cope with their troubled upbringing, but at the same time doesn’t take things too seriously either; after all, this is still a family comedy that contains lots of silly jokes and moments that certainly have slightly younger audiences in mind. While the tone can sometimes suffer as a result – in one scene, people are joking amongst themselves one moment, and then the next we are listening to this very dramatic story about a foster child’s own hard experiences – the heart and knowledge of this subject matter is evident within this script, and is portrayed with enough good taste and care to not feel too condescending or even confused.

Wahlberg and Byrne have strong chemistry with each other, as well as with the young actors that they’re working opposite; the latter definitely feel like real children, and not some middle-aged man’s sitcom-ish idea of what a young child should be, even when there are a few times one of them will drop a line that feels like it’s meant to be followed by laughter from a studio audience. The true standout, though, is Isabela Moner, a young actress who has made memorable appearances in mainstream films like Transformers: The Last Knight (also alongside Wahlberg) and Sicario 2: Soldado, and here gets to really shine as the oldest and most conflicted of the siblings, who certainly does and says bratty things here and there but she’s never written to be this one-dimensional teenage caricature; you can tell that she has plenty of issues with being placed in a caring position for her younger brother and sister at such an early age, and her acting out in these numerous ways is part of a very natural teen instinct to rebel while also her own way of trying to cope with all the rotten stuff she’s had to go through. Moner plays the part beautifully, getting the right amount of laughs in one scene as well as the right amount of tears and genuine empathy in others, and since this is a way better vehicle for both her and Wahlberg than that fifth Transformers movie, the two of them can actually act like human beings and get to do much more meaningful stuff together; there’s an entire scene where he takes her to a home he’s fixing up and encourages her to smash things with a sledgehammer to vent some of her frustrations, and it has far more heart to it and way more genuine emotions than any second of their other film together.

Despite a few shortcomings such as its inconsistent tone and the occasional awkward placement of comedy moments – a very dramatic scene near the end keeps getting interrupted by a cameoing Joan Cusack being weird for no real reason – the film is a nice and sweet family treat that should hopefully play well with audiences, although I am curious about how real foster families will react to it. I ponder this, because I have cousins who are foster parents themselves, and have looked after several children over the last few years from all sorts of backgrounds; without going into detail, they have been through a few rough times themselves in their positions, but they are such warm-hearted and caring people that it makes me think that they could see a film like Instant Family and not get reminded too much of how difficult it can be, because its intention is to show how it can be such a positive thing to do and to celebrate those who have gone through it as Anders also has, which I think my cousins would very much appreciate.

Instant Family is a heartwarming and sweet family comedy about the ups and downs of the fostering system, portrayed through a thoughtful and humorous – though occasionally inconsistent with the tone – script co-written by director and fellow fosterer Sean Anders, and a collection of heartfelt performances including young standout Isabela Moner.