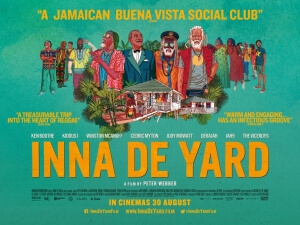 BASICALLY…: A group of pioneering reggae musicians explore their music’s relevance to both older and younger listeners…

As someone who knows next to nothing about reggae music or its cultural significance to the people of Jamaica, I am most certainly not the best person to be talking about this movie; it’s like if you asked someone who didn’t have a clue what a Pokémon was to explain to you the entire mythology from its earliest days. However, that shouldn’t stop me from talking about Inna De Yard as a movie in and of itself, as I feel like I can at least approach the topic with a fresh set of eyes and let the movie itself fill in the blanks where my knowledge of reggae is missing.

With that in mind, the movie is completely fine. It’s a soulful and easy-going – perhaps a little too much so – movie that will easily please people more familiar with reggae than I am, but it might struggle to make a crucial connection with you if it’s just not your thing.

The movie follows a group of reggae musicians – including veterans like Ken Boothe, Winston McAnuff and Cedric Myton, and younger faces such as Jah9 and Derajah – who come together at a hilltop house in Kingston for an open-air recording session of their classic reggae hits. Throughout, we get to hear them speak about their careers, their love for the community, some significant losses, and most of all how reggae itself has made an impact on not just their lives, but the entire culture of Jamaica as a whole.

This is the second feature documentary for director Peter Webber, who previously made Girl with a Pearl Earring and, of all things, the much-derided prequel film Hannibal Rising (which explains the scene in this film where the musicians suddenly start snacking on jerked meat made from fellow singer Judy Mowatt’s intestines…  obviously I’m joking, but wouldn’t that be something if that actually happened?), so if nothing else it’s a reasonably well-made movie. Webber keeps the focus solely on the lives of these people going through their different lives and bonding with each other during the central recording session, with occasional detours that take us through a brief history of the musical genre and also some interesting connections that stretch back centuries (it is theorised at one point that the rhythms we normally associate with reggae nowadays come from the days of slavery when Jamaica was occupied by the British), while also working in footage from a concert in Paris that the musicians perform at. The stories we hear from each individual person are interesting, with each one of them so full of character that it’s hard not to be charmed by their eccentricities, and of course the music is soothing as well as surprisingly emotional.

It’s a very laid-back film, which factors in as both a positive and negative comment (at least, it is for me). The movie does tend to let itself wander off-course a little bit, losing focus to a point to where you’re not entirely sure how, or even if, the movie is aware of its own sense of direction. I’ll admit, I found my mind wandering a lot during this movie, and it wasn’t necessarily because I was bored but more so that there didn’t seem to be an endgame of sorts with its own scenes, which would sometimes just end or keep on going long after they’ve made their point. The way that the movie was structured and paced, it was honestly hard to focus at times because it was never certain when it was coming to some sort of meaningful conclusion; it could have gone on another hour and still not feel as if it was wrapping up at last. I did feel that the characters were interesting enough to just about keep it all together, but I feel that if it had a tighter sense of focus then I would probably have not been so checked out of a movie I wasn’t even disliking.

However, I feel like that’s more of a personal thing than an actual fault with the movie itself, and it also may come down to the fact that reggae, for all its good intentions, isn’t really my jam. I should point out that I do not hate reggae or anything like that, but there are other types of music that I just prefer a lot more, and reggae is just something that I’m indifferent to a lot of the time. That being said, if you are much more into reggae than I am, then I feel you’ll probably get more of a kick out of this than I did; it’s rich with culture, colourful personalities and a sense of optimism even in areas that are rife with poverty and less-than-desirable ways of life – in other words, it’s the perfect movie for any reggae lover, which sadly doesn’t include myself. I will admit, though, for as much as I don’t get into reggae as much as other people, it was interesting seeing the genre and its historical connotations explored in such a lively and engaging manner, with parts of its rich history being news to my ears so I did learn a little bit more about not just reggae but Jamaican culture as a whole than I thought I honestly would from a film like this.

Clearly this isn’t a movie that was made for me, but that should not stop anyone reading this from being curious enough to check it out; if you can, it’s worth seeing at least once, especially if you’re a reggae fanatic and want to see some of the genre’s most beloved stars come together for a meandering little journey in the world of care-free Jamaican artistry. Like the music itself, it’s not for everyone, but those who are already into it will be wholly satisfied.

Inna De Yard is a serviceable documentary about the cultural impact of reggae in Jamaican society that’s rich with historical importance and colourful personalities, but it tends to wander off-course more than once which may not sit well for any viewer who’s already not that into reggae as a musical genre, but for anyone who’s more of a fan this is decent entertainment.

Want to decide what the movie’s like for yourself?
Check out Inna De Yard showtimes in London
via