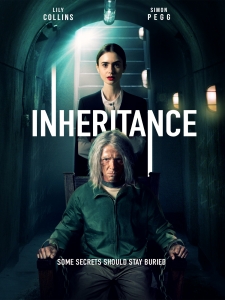 BASICALLY…: A young lawyer (Collins) receives a shocking inheritance from her late father (Warburton) that threatens to unravel and destroy her family…

Sometimes, the funniest people can make for the creepiest bad guys. Robin Williams showed a much darker side in films like One Hour Photo and Insomnia, and Steve Carell gained an Oscar nomination for his chilling portrayal of John du Pont in Foxcatcher; now, in a similar fashion, it’s time for Simon Pegg to deliver a wildly against-type turn as the crazed antagonist in a film that’s by no means on the same level as something like Foxcatcher, but is intriguing and entertaining enough to keep you invested, even when it gets way too silly for its own good.

The focus of Inheritance is on Lauren Monroe (Lily Collins), a young lawyer who comes from a privileged background; her family, domineered by patriarch Archer (Patrick Warburton), are an incredibly wealthy and powerful unit, with the younger son William (Chace Crawford) even being a major politician in the neighbouring New York. However, when Archer suddenly passes away, his wealth is distributed between his family… except for Lauren, who not only receives significantly less than everyone else, but is also bequeathed a dangerous secret that her father had been keeping for thirty years. Enter Pegg, who plays Morgan, a man who Archer had kept chained up in his underground bunker for reasons that become explicitly known throughout the course of the movie, and who now torments Lauren psychologically as she struggles to cope with this devastating reveal.

Needless to say, Pegg is the best part of this film. He plays the role as though he’s auditioning to be the latest actor to portray Hannibal Lecter, soft-spoken and intellectual but with a clear dose of craziness, and truth be told he does creepy and sinister effectively well, even when he’s just uttering a recipe for key lime pie over and over again. Pegg has played a number of less-comedic roles before, but this feels like the furthest away from his comfort zone he has ventured yet, excelling at being extremely unnerving and as though he’s one second away from ripping somebody’s face off. The final act, where the actor is fully let loose (in more ways than one), is an especially entertaining showcase for the actor, proving he can be just as intimidating as he can be very funny; his crazed performance, particularly in this final section, is worth the rental price alone.

However, let’s not kid ourselves too hard; Inheritance is a pretty silly movie – but at least it’s entertainingly so. Much of the plot hinders around one person’s inability to call in the authorities, which would have solved a lot of problems before they got out of hand, and I know it’s not especially fair to point that out in a film like this, but for a main character who is supposed to be an educated, high-ranking civil servant, that glaring failure stands out like a Jedi at a Star Trek convention (a little geek humour there, to appease Pegg who I know will never read this). Lily Collins does her best here, but she is playing someone who you continuously feel little sympathy for as she makes one stupid mistake after another, to a point where she doesn’t even realise that her own rich and powerful politician brother might be – gasp! – using his wealth to bribe trade unions for his re-election. Despite the main character’s blatant ignorance, which certainly gets frustrating after a while, Collins’ performance does elevate the material, as you can tell she is really trying to be just as capable here as Pegg is, and to her credit she does prove a formidable match for her co-star in certain scenes.

The movie overall has the feel and look of a primetime television series, complete with a horrendously edited opening sequence which feels like it was put into a blender and carelessly put back together with a Pritt stick, making the “Previously on…” segments in front of Homeland or the like look far more competent. The way it’s shot and edited (bar that opening part) makes it clear that director Vaughn Stein is trying his best to do a David Fincher impression, but with dialogue that could only exist as cliffhangers before the show cuts to the adverts, and some late twists and turns which are straight out of a soap opera. Had this movie not attracted the attention of talented actors like Pegg and Collins, this would have been just a mere throwaway thriller that the distributor would more than likely have buried on VOD platforms, but their involvement instantly draws more attention to the project – especially Pegg’s against-type turn – which in and of itself makes you see the trashier elements of this script and parts of this filmmaking even clearer, because you’re always seeing how much better the actors are making this material look.

Despite being a load of nonsense with way too many holes and contrivances in this script, the film is an entertaining ride, and a lot of that does have to do with the performances. It’s delightful seeing Pegg – who, by the way, spends the entire movie wearing a jet-white wig and some unconvincing old-man make-up – go all out in a role that’s wildly different than anything he’s played, and if nothing else it’s worth it just to see him be crazy for nearly two hours and being damn good at it too. The film itself, though, you can take it or leave it, or ever choose to throw it in a bunker for the next thirty years for all I care; either way, it never matches up to his insane performance.

Inheritance is a mostly silly thriller with dialogue and plot twists straight out of a melodramatic television series, not to mention production qualities that resemble something best seen on a small screen, but the performances do help to elevate the material, especially Simon Pegg who is having plenty of fun playing against type as the film’s crazed antagonist.

Want to decide what the movie’s like for yourself?
Check out Inheritance streaming links
via