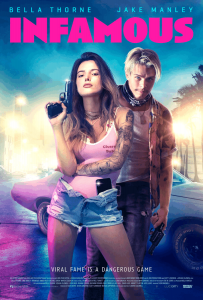 BASICALLY…: A fame-hungry young woman (Thorne) embarks on a crime spree with her new boyfriend (Manley), posting their exploits on social media…

When I reviewed Unhinged recently, I made it clear as day that despite its strong entertainment value, it is a trashy movie. There’s nothing wrong with enjoying a bit of trash every now and then, so long as it keeps the thrills going at a digestible pace, and it has no false pretences that it’s anything other than the B-movie schlock that it is.

A movie like Infamous, however, is exactly the opposite; it seems entirely unaware that it’s trash, and thinks it’s saying something far more powerful and provocative than it actually is, which makes it a lot harder to stomach because you have to sit through a lot of pretentious, self-indulgent garbage before it even gets to something barely resembling a point. There’s trash, and then there’s trash; Infamous is the latter.

The film is about Florida teenager Arielle (Bella Thorne), who’s desperate to escape her Podunk backwater town and seek fame on her social media platforms. She meets local ex-con Dean (Jake Manley) and falls hard for him, and not long afterwards they hit the road, robbing some convenience stores and marijuana dispensaries along the way – which Arielle ends up live-streaming, earning them an unexpected online following, and giving her the fame and glory she’s always wanted.

It’s essentially a modern-day Bonnie and Clyde story, and there’s one problem with that (actually, there’s many problems, but this is a key one): there already was one such movie not that long ago, and it was called Queen & Slim. If you’re looking for something that takes the classic story of those legendary outlaws and updates it for the 21st century while also having something genuinely profound and timely to say, by all means watch that over this film, which is far more vapid and heavy-handed. Infamous is basically Queen & Slim for douchebags, in that you’re following two very unappealing characters, who you never care about in the slightest, going about doing very terrible things for just over ninety minutes, and almost never facing any real consequences. However, the movie is constantly trying to convince its audience that it’s a much deeper film than it is, with artsy camera shots laced over dreary monologues about fate and destiny that even a Terrence Malick film would roll its eyes at; Badlands, this is not. Instead, it’s an empty and utterly soulless crime thriller that has absolutely zero points to make about our current society, the influence of social media, or the misguided plight of the disadvantaged, despite so many opportunities for it to do so; alas, there’s nothing on its mind that’s important or even interesting to ponder over.

None of it would matter if the film was at least fun to watch, and it really isn’t. Despite the reasonably short length, it’s incredibly easy for your mind to wander because there’s nothing to it – not the story, not the characters, not the commentary, not even the performances – that’s worth getting invested in. The plot is a stale retread of the Bonnie and Clyde tale, only here it’s far less believable that anyone would want to cheer them on because these two criminals not only have zero charisma, but they don’t even do things that any rational person would willingly support, even if it’s online. You care for neither of these main characters because they’re both unlikeable and unsympathetic douchebags, and because neither of the performances are strong enough to sell you on their supposed bad-ass nature; admittedly, Bella Thorne is trying here, but she never fully convinces as either the fame-hungry dreamer nor the gun-toting outlaw she’s constantly promoting herself as on Instagram.

It’s a film that’s sweating buckets of douchebaggery, to a point where I’m convinced that were this shown in Smell-O-Vision (God forbid) it would reek of stale cigarette smoke and barely-masked body odour. It’s just not a pleasant movie to watch, full of ugly colour saturation and a heavy emphasis on nasty behaviour that’s clearly meant to provoke but instead just irritates the viewer. By the time it finally reaches a pretty underwhelming climax, you’ve already abandoned ship because any sympathy you may have had for these people has long since gone out the window, and there’s nothing else it has to say about anything for you to suddenly have a whole new level of respect for it.

It’s a dreary, pretentious and wildly unentertaining movie that’s not worth your time and money, especially when you can see much more enjoyable trash like Unhinged instead; yes, it’s not exactly the most sophisticated movie out there right now, but at least it’s aware of the fact that it’s a schlocky B-movie, and doesn’t set out to be something that it’s not. The ambition of Infamous, meanwhile, is entirely misplaced, and it doesn’t even have the courtesy of being entertaining as a means to guise its emptiness in almost every other department.

Again, there’s nothing wrong with enjoying a bit of trash every now and then, but it has to have some kind of entertainment value; Infamous doesn’t have any of that, and instead floats all the way over to the bin.

Infamous is an unappealing, dreary and pretentious crime thriller that seems blissfully unaware it’s trash and thinks it’s saying something far more provocative than it is, and it doesn’t even have a whole lot in terms of entertainment value to keep its trashy appeal afloat.

Want to decide what the movie’s like for yourself?
Check out Infamous streaming links
via