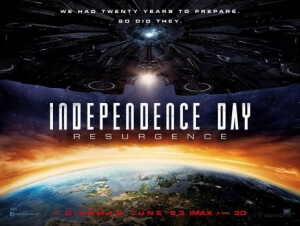 BASICALLY…: Twenty years on from the previous alien attack, the humans learn of a much larger fleet of extra-terrestrials heading their way, hell-bent on wiping out humanity once and for all…

In 1996, Roland Emmerich’s sci-fi epic Independence Day astounded everyone by not only becoming one of the highest-grossing films of all time (back then, anyway) with over $800 million worldwide, but by also setting the standards for summer blockbusters everywhere with its explosive action, starry ensemble cast that included the likes of Will Smith and Jeff Goldblum, and general sense of fun. The film itself was a cheesy but still enjoyable romp that remains decent enough for people to put on and unashamedly enjoy every now and then, even though they recognise that it is not intelligent filmmaking by any means.

This makes the sequel, subtitled Resurgence, an interesting prospect. In the twenty years between both films, Hollywood has repeatedly tried and failed to recapture the feel and scope of the first one with films like Armageddon, Battle: Los Angeles, San Andreas and the Transformers series all being prime examples of hollow CGI-laden disaster porn. Even Emmerich has retreated into making the same film ever since, with the likes of Godzilla, The Day After Tomorrow and 2012 all being pale imitations of arguably his biggest success as a filmmaker. So the idea of making a sequel to Independence Day now, two decades after it jumpstarted its own trend, was a risky venture: would audiences be so sick of this kind of film by now to even care about a follow-up, and even if they did how would this one be any different to what came before? It’s going to be the same city-destroying nonsense we’ve seen many times over, so is there even any point in making it anymore?

For all the risks that come with it, Independence Day: Resurgence does at the very least keep the spirit of the original alive – up to a point, anyway – even though, as we thought, it boils down to the same stuff we’ve seen in a million other disaster movies by now. But to its credit, at least it’s having as much fun with it as possible.

The set-up is that twenty years on from the events of the first film, mankind has used the technology from the downed alien ships to rebuild their cities and launch a space defence program to prevent any more extra-terrestrial life forms from invading. Heading the operation is David Levinson (Goldblum), the cable repairman turned world saviour, who soon discovers that the aliens had sent a distress signal back in 1996 alerting a much larger spacecraft to their whereabouts. As David and a group of human fighters including Jake (Liam Hemsworth), his fiancé Patricia (Maika Monroe), and Dylan (Jessie Usher) – the son of Will Smith’s now-deceased character from the first film – prepare humanity for the impending second invasion, a small group of people including ex-President Whitmore (a bearded Bill Pullman) and formerly comatose Dr. Okun (a long-haired Brent Spiner) are suffering from a strange series of telepathic disturbances that cause them to have prophetic visions of something else, which could either help the planet with their new threat or, erm, not.

Much like the first film, your brain isn’t required to be on while watching it, as it is the very definition of a loud, dumb summer blockbuster. It has a plot that makes less sense as it goes along, dozens of clichés within the first act alone, and the most basic and one-dimensional characters in the centre of the CG-drenched backdrops… and yet, again like the first one, it seems to be unashamed and even proud of those facts. It knows that its primary mission is to entertain the audience and give them something far-fetched and silly to counteract the po-faced seriousness of the likes of Batman v Superman: Dawn of Justice or Warcraft: The Beginning, offering them – like most big-budget blockbusters should – a chance to escape into a vivid and imaginative world, even if that world is a very stupid one. In those terms, Resurgence does that fine, and you will find yourself having the guiltiest of pleasures watching all this on-screen destruction and ludicrous plot developments, even as Emmerich continues to test the audience’s patience with all his familiar negative tropes from dozens of awkwardly forced comic relief characters (we counted at least three!) to ridiculous and sometimes logic-defying scenes where our heroes narrowly avoid getting hurt in the most cataclysmic of disasters.

If you can’t overlook its corniness, clichés and stock characters, that’s fine and we won’t blame you for thinking that – aside from Goldblum, Hemsworth and Monroe, a lot of them are rather bland and forgettable, while the plot really doesn’t make sense and the clichés coming a mile away, when it’s not borrowing from the likes of Close Encounters of the Third Kind, Contact, Aliens and quite a few others – but if you desperately want to switch your brain off for a couple of hours, then this should fill your cravings for the time being, until the next and hopefully better dumb blockbuster comes along.

On a final note, we realise the irony of us releasing our review of Independence Day: Resurgence in the wake of a certain major decision in UK politics. While we are choosing to keep our opinions to ourselves, it should be duly noted that we don’t necessarily support what the title unintentionally suggests. We are instead supporting a dumb, relatively fun summer blockbuster sequel to a film where Will Smith punches an alien and says “Welcome to Earth!” You don’t find THAT in British politics nowadays.

Independence Day: Resurgence is a very dumb but relatively enjoyable blockbuster sequel which, even though it expectedly contains an uneven amount of clichés, stock characters and overused CGI, manages to retain its record-breaking predecessor’s sense of fun and silliness, up to a point. It’s harmless but mindless entertainment.