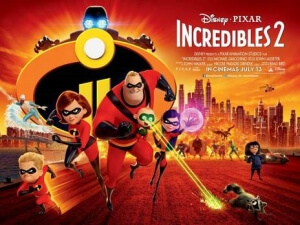 BASICALLY…: The super-powered Parr family face new obstacles when they are presented with an opportunity to bring superheroes back into the spotlight…

A lot has changed since 2004, when Brad Bird made his Pixar debut with The Incredibles. Back then, superhero movies were far and few in between, with the genre still in the doghouse after notable failures like Batman and Robin, Steel and Catwoman, and while there were a few bright spots here and there – Sam Raimi’s first two Spider-Man movies, for example – none of them made quite as big an impact with both critics and audiences as Bird’s movie did. It was praised as a fresh, original and stylish take on superheroes at a time when they were the butt of every joke in Hollywood.

Flash forward to summer 2018, and the world is a very different place. Superheroes have never been more popular (and profitable) in the industry, with Marvel about to release its 20th film in its own cinematic universe, DC trying their hardest not to lag behind their biggest competition, and many other costumed avengers from different companies and filmmakers making their way to the big screen. Alongside its success, however, there have also been many conversations about the oversaturation of superhero movies, and whether or not the industry will buckle under the weight of all of these masked heroes headed for our multiplexes.

So, when news that Bird was finally, after years of speculation, going to be making a sequel to The Incredibles, another question would be asked (other than whether or not it would be worth the 14-year wait): could a superhero sequel such as Incredibles 2 really find a way to stand out amongst the crowd? Could Bird actually bring something new to the table that so many other superhero movies have done in the last decade-and-an-almost-half of the first film’s dormancy?

The answer to both is, thankfully, yes, yes, and yes again; Incredibles 2 is a hugely entertaining and delightful sequel that might be just shy of incredible (especially in comparison to its predecessor), but has more than enough to carry itself as a perfectly enjoyable follow-up.

Taking place right where the first one left off, the Parr family – comprised of Bob/Mr. Incredible (Craig T. Nelson), Helen/Elastigirl (Holly Hunter), Violet (Sarah Powel), Dash (Huck Milner, replacing Spencer Fox from the first) and baby Jack-Jack – are still struggling to cope with the law that prevents superhero activity. Bob and Helen, along with their friend Lucius/Frozone (Samuel L. Jackson), are soon contacted by businessman and superhero fanatic Winston Deavor (Bob Odenkirk) for a mission to bring superheroes back in the public’s good graces, and hopefully reinstate them back into society. While Helen is brought into the field to save citizens from a new villain called the Screenslaver, who hypnotizes people into doing his bidding, Bob stays home to look after the children – a simple task, if it weren’t for the fact that Jack-Jack has just started to show his father exactly what he can do.

Unlike the first film, which tended to focus more on Mr. Incredible than other members of the family, this one is much more of an ensemble film that sees everyone get their chance to shine in their own unique ways. Out of everyone, it’s baby Jack-Jack who gets some of the film’s biggest laughs, just from the seemingly endless amount of powers he apparently possesses that tend to come out of nowhere for some fantastic sight gags, especially during a particularly amusing showdown with a raccoon. Bird has always been one to find a perfect balance of fun action and laugh-out-loud material in his films, and here you’ll find some of the most stunning action scenes he’s ever put to animation, not to mention comedy both physical and verbal that’s easily among his strongest to date, and that doesn’t just include said raccoon fight which calls back to classic Looney Tunes and Tom & Jerry cartoons in the best ways possible. This is an extremely visceral and breathtaking movie that keeps the action fun and always fresh, with stellar animation and a great cast of characters to keep the momentum at a steady pace and always make it enjoyable to watch. Oh, and it’s also probably one of the funniest movies that Pixar has put out in years, a perfect antidote to recent ones like Inside Out and Coco that set out to make you feel all sorts of emotions other than just laughter.

Really, the only reason why I don’t think it’s quite up to the level as the first – though don’t get me wrong, this one is a very close second – is because the story isn’t quite as strong, nor is the villain of the piece. The first film had a lot to say about the importance of family and the nature of hiding one’s true self, and with bad guy Syndrome the dangers of toxic fan worship (which kind of makes you wonder whether Bird looked forward into the future a little bit when he wrote that, given everything going on with Star Wars actress Kelly Marie Tran right now), whereas this one is just more of a fun and light-hearted continuation that’s more just an excuse to be around these characters again after fourteen years, and features a villain with the powers and motivation of a standard Saturday morning cartoon instead of something far more layered than Syndrome was. In that regard, this film falls more into line with the majority of superhero films nowadays, which while done well mostly stick to a proven formula with a tighter focus on its likeable heroes than the villain, at the slight expense of making it somewhat predictable and without much in terms of real surprises.

But where it does stand out among the crowd is in how it really manages to find a wonderful balance of all-out action and all-out comedy, making this one of the most entertaining family blockbusters of its kind in quite some time. It’s a welcome return to this world after nearly two decades away from it, with characters that we enjoyed greatly the first time around and get plenty more chances to shine in this one, all mixed together with Bird’s trademark sense of humour and strong action choreography that really elevates the material, even when conceptually it ever so slightly falls behind its predecessor. It’s already breaking box office records in the US, and there’s a reason for that; The Incredibles has become such a beloved property over the years that the desperation for a follow-up has been excruciating, more so than any Pixar movie, and now we finally have a sequel that embraces (almost) everything that made the first film so great – incredible, even – and does so in new and exciting ways.

Even in a world dominated by comic-book movies, Incredibles 2 is a stand-out piece of work. Let’s just hope it doesn’t take another fourteen years for an Incredibles 3, because where this film leaves off – and like the best of them – it leaves you wanting a lot more.

Incredibles 2 is an extremely fun and glorious sequel that matches its predecessor in almost every way (except for the weaker story and villain), with some great action, laugh-out-loud comedy, charming characters, and enough meat on its bones to stand out amongst the many other superhero movies out nowadays.