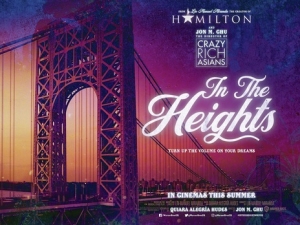 BASICALLY…: In the New York neighbourhood of Washington Heights, a bodega owner (Ramos) and other residents dream of better lives…

Before Hamilton made him a household name, Lin-Manuel Miranda was best known as the co-creator and songwriter of another, slightly more obscure stage musical called In The Heights. Although initial reviews were positive after its 2008 Broadway debut, in addition to winning four Tony awards including Best Musical, Miranda and Quiara Alegría Hudes’ production seemed to have slipped under most people’s radars somewhat in the years since, only for interest to be renewed after Hamilton’s success.

A film adaptation of the musical has taken a little longer to come to fruition, with a Universal-backed version suddenly cancelled in 2011, before moving over to The Weinstein Company until THAT bombshell saw the project snapped up by Warner Bros, only then for its planned summer 2020 release to be pushed back an entire year because of the pandemic. Now, though, director Jon M. Chu’s movie version of In The Heights has finally arrived to entice audiences back into the cinema and celebrate the summer season with an all-singing, all-dancing event that’s got great rhythm, catchy songs, and plenty of fun and likeable characters to go around.

The film takes place in the Latinx-populated New York neighbourhood of Washington Heights, and our lead is a young man named Usnavi (Anthony Ramos), the owner of a street-corner bodega who has dreams of one day heading back to his native home in the Dominican Republic and reviving his late father’s business. He isn’t the only one in the neighbourhood with dreams, though; there’s Vanessa (Melissa Barrera), a salon girl and Usnavi’s crush who hopes to move to a downtown apartment and pursue a career in fashion design; local prodigy Nina (Leslie Grace), who’s just returned from Stanford but is having serious doubts about wanting to return, despite the expectations placed upon her by the community and her own financially-strapped father Kevin (Jimmy Smits); Usnavi’s friend Benny (Corey Hawkins), who takes a liking to Nina even though he doesn’t have the full respect of her father who’s employed him at his taxi company; and even the small-time Piragua salesman (Lin-Manuel Miranda himself) who find himself always competing with rival business Mister Softee. Watching over most of them is “Abuela” (Olga Merediz), the neighbourhood matriarch who raised the orphaned Usnavi and offers gentle, caring advice to many of the other people in the city block.

Much of the story is fairly loose with a fly-on-the-wall approach, as the residents just live their lives and figure out what it is they want amidst a summer of heatwaves, winning lottery tickets, crowded public pools, and eventually an all-encompassing blackout. Because it is operating with such a loose narrative, it sometimes doesn’t have the best focus in the world, especially when there are quite a lot of characters that the script – provided by co-creator Quiara Alegría Hudes – dedicates a considerable amount of time to, like a trio of salon owners (one of whom is Brooklyn Nine-Nine’s Stephanie Beatriz) whose plot in the movie about having to move away from the increasingly gentrified neighbourhood often gets lost in the mix. From a purely narrative standpoint, it’s easy to see some audience members becoming a bit lost trying to navigate so many of these storylines and characters, in a structure that is nowhere near as solid as something like Hamilton.

However, whatever issues one may have with the overall set-up of In The Heights are largely made up for with its absolute fire-cracker of a musical score, a plethora of enjoyable characters, and some very imaginative choreography that director Jon M. Chu flaunts like mad. The songs have that sweet Lin-Manuel Miranda blend of hip-hop and salsa, with the actors/singers spitting rhymes with real passion and dedication while also impressing with their own singing voices (Corey Hawkins, who to my knowledge has not taken on a musical role before in his career, particularly surprises with a rather smooth and strong vocal range), and they’re catchy enough to have you tapping your feet along to the music and bouncy lyrics. The film also does well to set up the main characters’ individual struggles and make you care for their overall plight, including a sweet-natured turn by Anthony Ramos who makes his character’s dream of heading home to the Dominican Republic sound both optimistic and also tragic at the same time. Elsewhere, female leads Leslie Grace and Melissa Barrera have enough charm to their performances that humanise people who in the wrong hands could have been harder to root for, while 65-year-old Olga Merediz completely brings the house down with a fantastic solo number that easily becomes one of the film’s highlights.

Director Jon M. Chu brings a wide-eyed and passionate flavour to his musical numbers, with energetic choreography and occasional whimsy – one song sees a couple literally dancing up the walls of an apartment building – that shows the filmmaker’s clear knowledge for what makes musical cinema work, while also giving his actors and the environment room to breathe during some of the more dramatic scenes. He’s fortunate to be working with material which, while perhaps not the most straightforward or even that solid storytelling, still manages to find ways to honour its Latinx origins and culture without being too condescending or pandering, and works well enough on the screen as it clearly does on the stage.

It’s a fun, bright musical that’s easy for pretty much anyone to go in and have a good time with, so if you’re in the mood for something cheery and gloriously sunny, then In The Heights is the bright slice of escapist musical cinema you’ve been waiting for.

In The Heights is a fun and enjoyable movie musical that contains strong Latinx-flavoured musical numbers, likeable characters and cheery direction, which helps it overcome some of its flimsier storytelling.

In The Heights will be released in UK cinemas on Friday 18th June 2021 – click here to find a screening near you!