In the Earth (Review) – How Ben Wheatley Spent His Lockdown 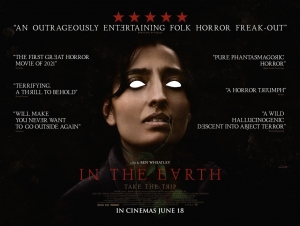 BASICALLY…: A scientist (Fry) has some strange, hallucinatory experiences during a routine mission deep in a forest…

Pandemic-era movies – i.e. films that were made during lockdown, and even manage to squeeze the virus or certain lockdown measures into the plot somehow – have a tendency to either be really clever in how they utilise those actual restrictions, like Host, or tastelessly exploit people’s fears and paranoias, like Songbird. However, Ben Wheatley’s newest film In the Earth offers a third alternative; take the basic outline of the pandemic, and go absolutely full-on weird with it.

The filmmaker wrote and shot the movie during last year’s lockdown, with principal photography taking place over the course of 15 days, and with a minimal cast and crew to help with social distancing on set. A standard enough practise for any movie that decided to shoot during the annus horribilis that was 2020, but in Wheatley’s case it seems to have greatly helped his film achieve that overbearing sense of isolation and creeping dread that it does a rather strong job of emphasising. Of all these pandemic-era movies, In the Earth is certainly among the strongest, while in terms of Wheatley’s track record of producing some of the most sensually bizarre low-budget genre movies of the past decade, it’s most certainly a Ben Wheatley film through and through.

The pandemic itself largely serves as a contextual backdrop; set in the middle of what appears to be a deadly virus outbreak (characters mention that a third wave is currently in motion, which given recent news stories in June 2021 makes you wonder if writer-director Wheatley was being prophetic or just taking a wild guess at the time), it takes place in a remote woodland area somewhere in the country. Martin (Joel Fry), a scientist, has been tasked with venturing deep in the woods on a routine mission to assist former colleague Dr. Olivia Wendle (Hayley Squires) with her ongoing experiments, and he is accompanied by park guide Alma (Ellora Torchia) who certainly knows her way around the area. As the two of them venture deeper in the woods, they encounter a number of eerie details about this forest, whether it’s the strange fungi or local folk tales about a powerful seeing stone – and once they encounter woodland hermit Zach (Reese Shearsmith), things quickly go from bad to far worse in a matter of minutes.

Like most of Ben Wheatley’s smaller genre movies, whether it’s Kill List or High-Rise, In the Earth is not a movie designed for general audiences to watch and enjoy; in fact, it’s completely understandable if there are just as many people who come out and say they hated this film as there are people who really enjoyed it. It’s easy to see why, as Wheatley incorporates a lot of his signature oddball style into this movie, from strange psychedelic imagery to some intense psychological and even gory violence genetically designed to make audiences feel uncomfortable (the amount of audible groans I heard during a stitching scene at my screening were amusing, to say the least), and if in the past you’ve been put off by any of that in his films, then I don’t know why you’d think that In the Earth would buck the trend somehow.

However, if like me you’ve been a lot more open-minded about his experimental nature than others, then this film will give you plenty of Wheatly mayhem to enjoy. His filmmaking here is strong, because it takes heavy advantage of the pure creepiness that this forest provides and, through a mix of sturdy sound design and a compelling musical score by Clint Mansell, you really feel each and every crunch of leaves or snap of branches that are heard in this eerily quiet woodland domain. There are parts when you can tell that this was a somewhat quick production – the camera quality sometimes alternates between a more standard handheld device and what appears to be iPhone footage, which suggests that Wheatley and his crew had to improvise on some shots – but it does function well enough as an interesting stylistic choice rather than a sign that they were in a race against the clock whilst making it. The writing, too, give us bare essentials from basic characters to a wildly overcomplicated backstory regarding what may or may not be operating in these woods, but again Wheatley finds a way to make it work by hiring good actors who can bring their intimidating roles to life, and in some parts with extremely severe violence even making things rather darkly funny (a development with a character’s foot, which is one of the many horrible things to happen to said limb, plays out almost like it’s Sightseers-level black comedy). It’s a well-made movie, and more impressive knowing that it was conceptualised and shot in a much more limited period than most of Wheatley’s other movies.

While In the Earth was a movie I did enjoy overall, it’s also one where I can easily get why others might not be so welcoming. There are visuals in this film that can be so blinding and almost unwatchable that the only way you can properly view them is through your fingers so as not to absorb much of the light; anyone who suffers from severe epilepsy should steer clear of this film, because a lot of the second half is engulfed in some extreme strobe lighting that is almost asking for a lawsuit from audience members that are prone to seizures. It’s also one of those horror movies where things only get worse because characters are either too trusting of other people, or they make a series of mistakes that ultimately lead to far more carnage than there ought to be, and like some of the more obscure and artsy horror films it leaves things on an all-too ambiguous note. It so happens that, for me anyway, it was all done well enough to leave me thoroughly entertained, but at the same time if someone came up to me and said that they absolutely despised it because of its overwhelming and on-another-level visuals, then I would be sympathetic to their cause.

Whichever direction you end up falling in with this movie, though, there’s no denying that In the Earth is most certainly a Ben Wheatley movie (far more than his adaptation of Rebecca from last year, which felt more like a routine studio job), and depending on your taste for his brand of absolutely strange and psychedelic folk horror, then that can only mean fun and grisly times are ahead.

In the Earth is an entertaining folk horror from writer-director Ben Wheatley, who brings his trademark psychedelic vision to a creepy and well-made story, though some of its heavy stylistic choices are bound to divide audiences.

In the Earth is now showing in cinemas nationwide – click here to find a screening near you!