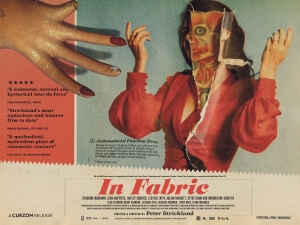 BASICALLY…: A single mother (Jean-Baptiste) buys a red dress from a department store, only to soon realise that the dress may be cursed…

It’s been nearly eight months since I first saw In Fabric at last year’s BFI London Film Festival, and in that time I’ve reflected on the sheer oddity that is Peter Strickland’s latest movie. Back then, I thought the film to be a devilishly entertaining and campy as hell horror film that was a far better visual remake of Dario Argento’s Suspiria than the actual remake of Suspiria from last year, a second viewing not only reaffirms those opinions, but also opens up some newer and more interesting discussion topics to ponder over, from the cultish worship of consumerism to the various themes of loneliness, control and even emasculation – all of which are in a film about a killer dress.

No, seriously; the plot does indeed revolve around a dress that ends up causing horrible things to happen to anyone that wears it. But before you go away thinking that this is just some silly B-movie trash, you should know that while it’s certainly silly it has such an eccentric personality to it, as well as a visceral and odd style, that it’s weirdly enticing, despite the kookiness of its plot.

Set somewhere in the 70s or 80s (it’s never made especially clear when this is set), we begin with middle-aged divorcee Sheila (Marianne Jean-Baptiste) seeking a dress for an upcoming date. To find one, she heads to an extremely odd department store where she is greeted by head salesclerk Miss Luckmore (Fatma Mohamed) who is alarmingly attentive and seems to speak exclusively in cryptic syntax (example dialogue: “A purchase on the horizon, a panoply of temptation, the hesitation in your voice, soon to be an echo in the recesses of the spheres of retail”), but most importantly points her in the direction of a nice red dress that Sheila eventually purchases. Shortly after, she experiences a series of strange events surrounding this dress: she develops a rash after wearing it, the washing machine is destroyed when it’s put in for a clean, and she is even attacked by a dog who rips the dress up – only for it to seem good as new afterwards. The dress’s wrath doesn’t stop there, as we also see it fall into the hands of mild-mannered electrician Reg (Leo Bill) and his fiancé Babs (Hayley Squires), who both also go through some pretty strange episodes in relation to the dress, the origin of which remains a mystery, as does the backstory of this very unusual department store that it hails from.

Something that I definitely picked up on during my first viewing of this film, but for some reason didn’t really go into much detail about back in October, was how it treated the very nature of consumerism as though it were a cult, and how much fun Strickland is clearly having whilst playing with these satirical themes. There is something very uneasy about this central department store, from the nature of its employees who dress and sometimes act like witches – again, going back to the Suspiria comparisons – to its television advertisements which are designed in a way that make them seem like they’re indoctrinating the audience with flashy surreal images, kind of like pre-watershed brainwashing. Movies have certainly taken satirical aims at the public’s need to buy things they don’t necessarily need, such as Dawn of the Dead and They Live, but very few have done so in quite as artistically – at least, not in recent memory – as In Fabric, which visually speaking takes cues from some of the classic giallo movies of the 70s and 80s (among them films by Dario Argento and Lucio Fulci) whilst having fun with the idea that people are so tempted by the sinister nature of capitalism that a dress which may end up killing you is a rare must-have item. While it’s not revolutionary commentary by any means, it is at the very least aware of what it’s satirising and uses those real fears to make a fun little exploitation movie that has a very British sensibility to itself.

I mentioned in my previous review how much I admired both Marianne Jean-Baptiste and Hayley Squires in their respective roles, and nothing has really changed about my opinions on their pretty strong and entertaining performances, but through them as well as a couple of other core characters I noticed a few intriguing themes that the movie also likes to have a bit of fun with. The theme of control, for instance, is all over this film like the central dress across a character’s body; beyond the hypnotic means that the department store seem to use in order to attract customers, Jean-Baptiste’s character is struggling to maintain authority in her own household, with her teenage son (Jaygann Ayeh) spending a lot of time with an insensitive older woman (Gwendoline Christie) and preferring to eat meals with his divorced father instead, but when she does finally decide to do something for herself it’s by buying this killer dress which is sheer bad luck on her part. Elsewhere, Squires’ Babs clearly wears the trousers in her relationship with fiancé Reg, who’s kind of a gawkish fellow that consistently gets trampled over by his boisterous pals, his intimidating boss and even his nagging wife-to-be (albeit in ways that feel like they’ve been together for a long time as they still show clear affection towards each other), yet he somehow possesses the power to send anyone into an erotic trance through the power of dull descriptions of the inner workings of washing machines.

That right there sums up the weirdness of this film, as well as how it portrays these particular themes, but again it’s done in such a delightfully campy and entertaining way that, like the items on display at this bizarre department store, might not be to everyone’s tastes but is at the very least an intriguing thing to check out.

In Fabric is a devilishly campy and entertaining homage to the giallo films of the 70s and 80s, which also buries itself in deeply British satire and subtle themes you might only pick up on during a second viewing.

Check out In Fabric showtimes in London
on Walloh.