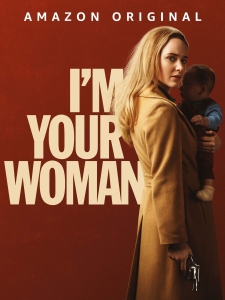 BASICALLY…: A woman (Brosnahan) is forced to go on the run after her gangster husband (Heck) makes unwise decisions…

Fans of Amazon’s hit show The Marvelous Mrs. Maisel might be taken aback a little bit by its star Rachel Brosnahan’s new feature with the steaming service. Gone is the wily wit and the gentle touch, not to mention the exasperated presence of Tony Shalhoub, and in its place is a dour, suspenseful crime thriller that Brosnahan finds herself just as apt at taking on board as the ongoing saga of a Jewish housewife-turned-comedian. The period setting remains, though, albeit in the 1970s this time round when gangster flicks felt the most at home, and when a movie like that could feel sophisticated, refined and respectful, as opposed to some of the stereotypical portrayals you see nowadays.

Of course, both The Marvelous Mrs. Maisel and I’m Your Woman are leagues apart in tone, style and pacing, but Brosnahan excels in both, and the material she’s been given to help make shine is also quite engaging as well.

Brosnahan plays Jean, a lonely housewife whose husband Eddie (Bill Heck) – who we’re immediately suspicious of the minute we first see him – one day walks into the house with a baby boy, claiming it’s theirs (this is especially surprising because, as we learn, Jean is unable to have any herself). Her initial shock of newfound motherhood is rudely interrupted in the middle of the night, when an associate of her husband’s tells her that she and the baby, which she’s named Harry, need to leave the house immediately, under the protection of ambiguous bodyguard Cal (Arinzé Kene). He tells her that she and Harry need to lay low since a now AWOL Eddie has committed some sort of betrayal, but his lack of clear answers and strict instructions, on top of being a mother to the infant boy, leave Jean increasingly frustrated and stressed out, but eventually she begins to find her footing and take matters into her own hands.

Almost right away, director and co-writer Julia Hart – no stranger to streamer-exclusive flicks, having also directed the far inferior Disney+ original Stargirl earlier this year – establishes a strong sense of mystery that interests you enough to want to know more about what’s going on. We’re just as in the dark as Jean is when her sudden departure from her settled routine literally comes knocking at her door, and the more stonewalled both she and the audience are when it comes to being given straight answers about what’s going on, why certain people are after her, and even how Cal himself got roped into this mess, the more desperate we and the protagonist become to figure things out on our own. Hart, along with her co-writer husband Jordan Horowitz, slowly but surely plant little titbits of vital information along the way, but not too much at once, to ensure that our interest remains solid throughout, even when certain reveals aren’t perhaps as revolutionary as they might have been built up to be. By the time more and more truths are outed, we’re completely on board with this plot and these characters that we actually do want to see it all the way through, since the smart script and steady direction give them all time to breathe and be fleshed out enough to genuinely care about this woman, her adopted baby, and the people she meets along the way, both good or bad.

The movie is a slow-burn all throughout, which might cause some people to get a little antsy over its seemingly stretched-out running time, but this feels like a pace that is earned through its intriguing central mysteries, strong filmmaking – the cinematography and editing often resemble something that would have been made in its time period, with a few touch-ups here and there – and, naturally, some very fine performances. Brosnahan, as mentioned earlier, is very good in this, conveying the wide-eyed innocence (or, it could be argued, ignorance) over her husband’s line of work, and the steely determination she slowly grasps over time with great conviction, as well as giving her character enough dimensions to prevent her from falling into too many mobster-wife clichés. Also quietly compelling is Arinzé Kene, who at first we’re really not sure if we should trust or not – how do we know, we’re thinking soon after we’ve met him, that he’s not working for the people that Jean’s husband has wronged? – but as we learn a little more about him and those closest to him, and how they in some way connect to Eddie, he becomes a very interesting figure indeed.

Hart’s film is certainly a throwback to certain movies of this era, though it does adopt a few modern sensibilities of its own. Naturally, there is a feminist twist to much of the gangster activity we see (which isn’t that much, given that we rarely, if ever, leave Jean’s side at all while she’s on the run), but unlike some of the far worse recent examples like The Kitchen, this movie is far less overt and more natural about it, keeping its focus steadily on the developing plot and its legitimately strong characters who have actual arcs and aren’t pigeonholed into walking, talking stereotypes. It’s well-handled, and doesn’t feel shoehorned in or like it’s there just to fill a quota when it comes to appealing to female audiences; it’s something that’s strong enough for most people to enjoy, and to stand on its own like it always should have been to begin with.

Be sure you don’t start this movie right after binge-watching The Marvelous Mrs. Maisel, though; the tonal whiplash of Rachel Brosnahan content will be enough to land you in a neck-brace.

I’m Your Woman is a compelling and smart throwback to 70s-era crime thrillers, told from a genuinely fresh perspective from writer-director Julia Hart who injects a lot of mystery and unpredictable twists to continuously hold your interest despite the slow pace, with a great lead performance from Rachel Brosnahan that holds everything together.

I’m Your Woman is now available on Amazon Prime Video.