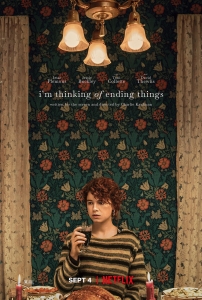 BASICALLY…: A young woman (Buckley) finds herself in an increasingly strange situation when she accompanies her boyfriend (Plemons) to meet his parents (Collette and Thewlis)…

Charlie Kaufman is a creative oddity, adored by those who find his work fascinating and brilliantly cerebral, but scoffed at by those who instead find it pretentious and confusing. Whether it’s his numerous acclaimed screenplays for films like Being John Malkovich, Adaptation and Eternal Sunshine of the Spotless Mind, or his similarly celebrated directorial outings including Synecdoche, New York and the stop-motion animation Anomalisa, Kaufman’s surreal and often thematically devastating style is polarising, to say the least.

I imagine the “for” and “against” camps will butt heads once more with the release of Kaufman’s latest film, I’m Thinking of Ending Things. Some will call it brilliant, others not so much; either way, it’s a movie that is bound to kick-start some kind of discussion about whatever the hell it’s trying to do, and I suspect that conversation will be going on for quite some time, similar to when something like The Shining first came out. Now, am I saying that this movie is just as good as the Stanley Kubrick classic? Not exactly, but my point is that the themes, structure, characters and aesthetic of this movie are bound to be debated as much as people still are about The Shining to this day, and just like Kubrick’s film it’s one hell of a movie to try and unpack – at least, on the first viewing.

The plot is… well, it’s something that’s very tricky to try and summarise in a paragraph. The crux of it revolves around a young woman (Jessie Buckley) – don’t bother learning her actual name, for it changes quite a lot here – who’s accompanying her boyfriend Jake (Jesse Plemons) on a long road trip in the middle of a snowstorm to visit his parents (Toni Collette and David Thewlis). Straightforward enough, it seems, but even before they arrive she’s begun contemplating breaking up with Jake after seven weeks of dating, and their long conversations with each other vary from the menial to the downright morbid. Things get even weirder when they eventually arrive at his family farm, with unexplained events that involve the likes of rapid aging, unconsumed meals, maggot-infested pigs, a scratched basement door, tinnitus, ice cream shops, and a chocolate yule log. Oh, and there’s also a portly, elderly high school janitor who we cut back and forth to frequently, his connection to the main story largely a mystery.

See? I told you the plot was difficult to describe in a mere paragraph.

Hell, this entire movie is almost impossible to categorise. Kaufman plays his cards extremely close to his chest, keeping hidden any answers that easily explain anything, and letting the surreal visuals do the talking for him. You’re left to merely experience the chaos as it all unfolds right in front of you, from the ponderous extended conversations where characters recite poetry and entire film critiques about John Cassavetes’ A Woman Under the Influence, to the increasingly off-the-walls bending of time and physics in the matter of mere seconds, to every single bat-crazy artistic choice in the film’s wildly abstract third-act. It is a bewildering experience, because not only does each and every weird thing in this movie suddenly happen with almost zero context, but it’s hard to even get a exact read on what it’s all supposed to mean since you’re far too distracted by how strange it all is. From what I’ve read about Iain Reid’s original novel, on which this movie was based, things are spelled out a little clearer as to what exactly this is all supposed to be about, but just as Kubrick took Stephen King’s book The Shining and thoroughly made it his own, Kaufman morphs his own bizarre creation out of the source material and goes a few steps further than Reid’s prose, emphasising the surreal experience over a more concrete narrative.

This approach is both confounding, and oddly intriguing; as you experience one strange thing after another, you feel this lingering sense of doom and gloom in everything from the torrential snowstorm outside to the ugly colour scheme on the walls, as if any minute this unpleasant atmosphere is going to signal a grisly turn of fate for our increasingly concerned protagonist. The four central performances reflect the growing mood perfectly, with Jessie Buckley in particular delivering a quietly outstanding turn as a woman on the verge of not quite a nervous breakdown, but something that’s potentially much more explosive (special mention should go to Toni Collette, who does another fantastically unnerving turn which makes her similarly crazed character in Hereditary look fairly normal by comparison). Kaufman generously gives them a healthy amount of abstract material to work with, while he himself appears to take great pleasure in drawing out scene after scene with his trademark absurdity, including lengthy monologues and a climactic series of events that will most definitely leave you completely clueless, to his undoubtable amusement.

This is a movie that I can see being debated by critics for years, over its potential meanings and what kind of messages it is trying to convey. Because of its confusing nature, at least on the first viewing, it’s impossible for me to even say whether I liked it or not, because it’s far too unique to dismiss yet way too confounding to fully recommend. What I am certain of, however, is that you can expect loads of write-ups on it to appear online over the coming months or even years, ultimately proving that regardless of its quality, a Charlie Kaufman film will always be talked about by audiences.

I’m Thinking of Ending Things is an extremely surreal and oddly intriguing entry from writer-director Charlie Kaufman, which contains overly odd imagery and cerebral themes that will surely be heavily discussed by audiences for the foreseeable future.

Want to decide what the movie’s like for yourself?
Check out I’m Thinking of Ending Things streaming links
via