If Beale Street Could Talk (Review #2)

If Beale Street Could Talk (Review #2) 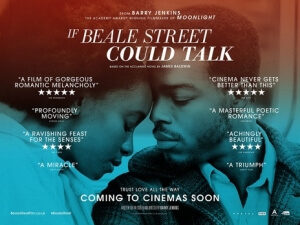 BASICALLY…: In 1970s Harlem, a young couple (Layne and James) finds their love tested when he is falsely imprisoned after being accused of rape…

This year’s Oscars sadly won’t see a rematch between filmmakers Damien Chazelle and Barry Jenkins, whose respective films La La Land and Moonlight duked it out for Best Picture two years ago with the latter eventually winning, as neither Chazelle’s First Man nor Jenkins’s If Beale Street Could Talk ended up getting nominated for the big prize. However, regardless of their lack of awards recognition, these two movies represent both filmmakers at a new stage of auteurism in their blossoming careers, which set the two of them up for even greater things down the line; with Jenkins, now on his third feature with this adaptation of James Baldwin’s novel of the same name, he has become a leading figure in black cinema that lets his passion and adoration for the craft guide his emotions, and in this case it has led him to create a warm and optimistic, if ever so slightly bleak, romance that transcends beyond even the words that Baldwin originally wrote down.

The plot, as you may remember from the last time I reviewed this movie (back in October, during the London Film Festival), follows young African-American couple Tish (KiKi Layne) and Fonny (Stephen James), friends from childhood who have become romantically involved with each other. However, Fonny is soon arrested and imprisoned after he is accused of rape by a Puerto Rican woman who has since disappeared, and Tish learns that she is pregnant with his child, prompting her and her family, including mother Sharon (Regina King), to find a way to prove Fonny’s innocence before the baby is born, all whilst both lovers try to stay strong for each other despite him being incarcerated.

Jenkins inserts so much warmth and spirit into his film that makes it impossible to resist; you truly feel the electricity flowing through these two young people that are very much in love, which the writer-director conveys through tight close-ups of the actors’ faces, with eyes that stare into each other which suggest a true bond tied together with the world’s strongest rope. Layne and James are both uniformly excellent here, successfully conveying the raw emotion of their respective characters whether it be Tish’s shy nature or Fonny’s growing anxiety as his trial keeps getting pushed back, and they have wonderful support from actors such as Brian Tyree Henry – whose role in an extended sequence is one of the film’s most emotional highlights, especially on a second viewing – and Regina King, who’s become the film’s reigning champion during awards season thus far and for a good reason, as one segment later in the film undoubtedly proves.

Jenkins has recruited this fine ensemble of actors to portray his passion and giddiness for this source material, adapted here into a visual novel that relies as heavily on imagery and performances to tell this story as James Baldwin’s original novel relied on his way with words. His script is laced with romantic gestures, including lines about love that so easily could have come out as trite and cheesy in the wrong hands, as well as some well-chosen placements of light relief in the dialogue which help to lighten the mood when things begin to look a little too bleak. It is a beautifully paced film, shot gorgeously by cinematographer James Laxton, and accompanied by an absolutely wondrous musical score by Nicholas Britell that incorporates traditional orchestral instruments with the unmistakable sounds of New York jazz that really put a spring in your step as you follow these characters about. It makes sense that this film is being released in the UK around Valentine’s Day, because there is a burning sense of romance and goodwill spread all throughout this film, not just from our main couple but in the small acts of kindness that minor characters contribute, from Dave Franco’s young Jewish landlord renting a potential apartment to them after being so taken by Tish and Fonny’s adoration for each other, to a restaurant waiter played by Diego Luna offering them a table even when they don’t have any money.

It’s a film that rewards the very nature of love, even when this particular coupling is threatened by him ending up behind bars for something it’s painfully clear he did not do, and calls out the demons and prejudices of those who harbour such negative attitudes towards it. I mentioned in my previous review for this movie how Fonny’s highly religious mother, who in an early scene is shown to be an utterly cold-hearted monster who condemns her unborn grandchild for being born of sin, gets what she deserves when her husband strikes her across the face (in the one and only instance I will ever condone violence towards women), and I stand by that statement because it’s a perfect example of how this film shows the real power of having a more nuanced soul that doesn’t let their inner prejudices get the better of them. The same can be said about Ed Skein’s cop who ends up being the one incarcerating Fonny, as it is clearly his racist ideologies that drive his desire to see this innocent young black man locked up for a crime it would have been impossible for him to commit. I feel that now is a more appropriate time than ever to remind people about the values of just being a good person, whether you’re in love or not, and this film artfully shows how fulfilling it can be to be as good to people as Tish and Fonny are to each other, which really shouldn’t be something we need to remind people of but in this day and age who’s to say?

It’s a solid recommendation from me, especially if you’re planning a Valentine’s Day trip with your other half, and are looking for something that’s romantic as well as extremely well-versed in the good morals of this dark world.

If Beale Street Could Talk is a heavily romantic, intimate, and exceptionally well-acted drama that further tightens Barry Jenkins’ grasp on meaningful filmmaking and promotes good morals that are sorely needed more than ever in an era of hate and prejudice.