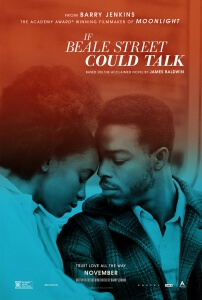 BASICALLY…: Two young lovers (Layne and James) struggle to be together when one of them is wrongfully convicted of a crime and sent to prison…

This review is of the cut shown at the BFI London Film Festival in October 2018 – the UK release date is currently listed for January 18th 2019.

James Baldwin, the revered novelist and social critic, has up until now never had one of his novels turned into a major Hollywood release. There are a few possible reasons for this; maybe the Baldwin estate was reluctant to allow studios to take some of the late writer’s work and tool it into something it never intended to be, or perhaps many industry types were – at the time, anyway – unwilling to adapt work meant to be for a specific African-American audience.

Whatever the reasons for there not being one in the past, the present is now looking a lot brighter for films with diverse messages and filmmakers; the success of films like Black Panther, Get Out and Crazy Rich Asians are proof that audiences are eager for more representation on film, especially when in the real world racism and overall prejudice still runs rampant in society, and with all that is going on in the news about racial injustice and intolerance, the time has never been riper for one of Baldwin’s works to make its way onto screens everywhere.

The ensuing adaptation of his 1974 novel If Beale Street Could Talk is brought to us by Barry Jenkins, himself a revered African-American storyteller after his previous film Moonlight shockingly – and scandalously – beat out La La Land for the Best Picture Oscar, and who adapts Baldwin’s romance novel with just as much beauty and intimacy as it needs, creating a resoundingly romantic and optimistic film that will surely make audiences’ hearts flutter.

Set in early 70s New York, young lovers Tish (KiKi Layne) and Fonny (Stephen James) have known each other since childhood, and are now firmly in a deep and passionate relationship with each other. However, Fonny is arrested and imprisoned after being falsely accused of rape, and when Tish discovers that she is pregnant with his child, she and her family desperately set out to clear his name before the baby is born, whilst both lovers struggle to keep together when one of them is behind bars.

There’s a reason that this movie was selected as the Love Gala at this year’s BFI London Film Festival; it is passionately romantic, a fact seen in the sweet chemistry between Layne and James, the way that Jenkins shoots intense but warm close-ups of parts of their faces, and the cinematography by James Laxton who lays a collection of comforting colours over the intimate scenes of love like a cosy blanket. Watching this movie, it’s as if I was right there watching these two very believable people fall deeper and deeper in love with each other, which just filled me with overwhelming joy and happiness for life and all its strange mysteries. There’s a scene that perfectly reflects this, where the couple are shown checking out a loft they hope to convert into a home, accompanied by Dave Franco who cameos as the landlord; as Franco observes their playful manner, he later admits that he wants them to have the loft because he likes people who genuinely love each other. It’s an opinion that I share with Franco’s character, and as cheesy as it may sound, love is such a powerful force that it can bring out the good in anyone, and I feel that Jenkins’ film really captures what it is to fall in love, regardless of the colour of your skin.

The film also tackles some serious topics such as racial injustice, false imprisonment, the harsh realities of what it means to be a person of colour in 70s America, and in an early devastating scene the tragedy of family demonization. Regarding the latter first of all, a scene where Tish tells both her and Fonny’s families about the baby sees Tish’s family react positively, but Fonny’s deeply religious and extremely cold-hearted mother is furious to see the child born out of wedlock, and effectively condemns the child to an early death, resulting in the only time I will ever accept an instance of spousal abuse because it is entirely called for. There’s also an extended scene where Fonny runs into an old friend played by Brian Tyree Henry, and they have a long, deep conversation about how the world treats black people in such inhumane ways that make them feel so inferior, and the combination of slow, steady direction as well as a powerful mini-performance by Henry makes it an emotional blow in an otherwise passionate and optimistic affair. Then, of course, there’s the implication that Fonny is behind bars because of a racist cop (Ed Skrein) who has it out for the innocent young man because of his skin colour, which the film doesn’t out right say is the reason but is heavily implied to be the case, and if so it wouldn’t be too out of place for a society filled with wrongful incarceration due to deep racism within certain members of the police force, something that most people should recognise in most law enforcement circles nowadays.

But amidst its darker social context is a story fuelled by love, compassion, and optimism about the future, an inspiring notion in a society that doesn’t seem too hopeful but nonetheless thrives in the deep power of the human soul. It’s a rich and romantic triumph for Barry Jenkins, who has surely made James Baldwin a proud spirit indeed.

If Beale Street Could Talk is a romantic and optimistic triumph for Barry Jenkins who brings the literary prowess of James Baldwin to the big screen with grace and respect, not holding back on his tough social issues but sweet themes of love too.