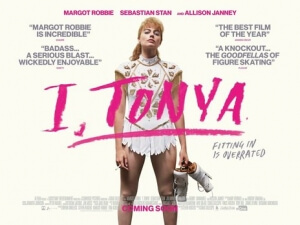 BASICALLY…: Olympic figure skater Tonya Harding (Robbie) faces public scrutiny when she is associated with a brutal attack on a competitor…

In the sporting world, the name Tonya Harding is very well-known, but for all of the wrong reasons. The professional figure skater, who at one point in time was best known for being the first American woman to complete a triple axel in competition (and only the second woman ever to do so), faced public scrutiny due to her alleged involvement with an attack on fellow figure skater Nancy Kerrigan, and her subsequent lifetime ban from all competitive figure skating.

The facts about what really happened, and whether or not Harding really did have a personal hand in the assault, are probably never going to be fully locked down due to multiple unreliable sources, and one of the many strengths about I, Tonya, which takes a look at Harding’s life leading up to and including “the incident” as it’s referred as, is that it embraces the ambiguity of it all and presents it as a dark comedy of errors and inane stupidity from all angles that, no matter what the facts may be, explores a very misguided piece of action with a pitch-black sense of humour.

Tonya Harding is portrayed in the movie by Margot Robbie, and we see from an early age that she was constantly pressured and psychologically tortured into figure skating by her monstrously abusive mother LaVona (Allison Janney), who showed no mercy in treating her daughter like a complete pile of crap. Things don’t get better for Harding as she grows up and falls in love with and eventually marries her friend Jeff Gillooly (Sebastian Stan), who it turns out is just as monstrous and abusive as her mother, if not more so. She persists, however, in a career in figure skating where even then she struggles to win over the judges due to her aggressive and unwholesome personality, but becomes infamous for her ambitious and successful triple axel triumph at the 1991 US Championships. Then, of course, comes the Nancy Kerrigan incident and the sheer idiocy that went into planning it and then executing it.

Director Craig Gillespie – in a massive step up from his previous film, the dire and painfully bland The Finest Hours – and writer Steven Rogers bookend the film with recreated interviews featuring the actors as their real-life counterparts, explaining events of the story from their wildly differing perspectives, which present a very ambiguous picture of the crime that gives us enough space for the audience to connect the dots while also giving us enough information to let them come to their own conclusion, instead of having it spelled out for them. It’s a clever way of telling this story, because it doesn’t offer any real answers to an event that at one point was the biggest story in sports, and since it’s telling the whole thing with several unreliable narrators the facts can so easily be jumbled together, not leaving us with much opinion as to which one is the more truthful account.

Meanwhile, the things that we do know for a fact, such as Harding’s impressive albeit short-lived skating career as well as her endless cycles of parental and spousal abuse, are handled with shocking humanity that give us a very dimensional portrayal of a person the world used to love mocking at every given opportunity. That is mainly down to how excellent Margot Robbie is in the title role, in a performance that’s unafraid to get down and dirty when depicting Harding’s lowest moments whether it be the constant assaults on her by both her mother and her husband – Janney and Stan, respectively, are also fantastic in this movie, with the former especially shining as the world’s worst mother who constantly finds new ways to show her severe awfulness – or her being found culpable in the Kerrigan assault primarily by association (or at least, that’s how one of the many in-movie accounts sees it). With all its fourth-wall breaking and larger-than-life depiction of reality, to say that this would be Margot Robbie’s own version of The Wolf of Wall Street – which of course she co-starred in – wouldn’t be entirely inaccurate, although this one has significantly less Quaaludes and midget-tossing.

This ties in to perhaps the film’s biggest strength when it comes to depicting the whole Nancy Kerrigan thing as a dark comedy, and that’s how it portrays the raw bumbling stupidity that went into the thinking of it. As in real life, it was orchestrated by a close friend of Gillooly’s, Shawn Eckhardt (played with grotesque sliminess by Paul Walter Hauser), whose desire for notoriety and for his name to be as significant as his friend’s wife contributes heavily to everyone’s eventual downfall, and you’re constantly confounded as well as tickled senseless by how dumb he as well as the hired goons he hires to break in Kerrigan’s knee are, and even more so by their sheer incompetence in even hiding the fact that they have committed a serious crime (a reporter, played by Bobby Cannavale, mentions how one of the attackers moved his car every fifteen minutes to AVOID suspicion). It’s astonishing that all of this, up to and including the derailing of the career of a promising Olympic athlete, was down to an obese moron who wanted just a little bit of what Harding had in terms of fame and notoriety. There are plenty of moments in this film that revel in the pitch-black humour found at its damaged core, and they too are effective in their own way, but the fact that much of what we’re seeing here actually happened and isn’t a case of people distorting the facts, that one just personally floors me.

It’s a fun ride of a movie that definitely isn’t for the faint-hearted – scene of abuse can get pretty tough to stomach – but should provide some pitch-black entertainment for others wanting a very unique account of a very tragic real-life event.

I, Tonya is an entertaining pitch-black comedy depicting the rise and fall of disgraced figure skater Tonya Harding, which aside from excellent performances including Margot Robbie and Allison Janney, shows a unique and darkly funny account of the sheer idiocy that went into planning the infamous Nancy Kerrigan incident.