I Lost My Body (Review)

I Lost My Body (Review) 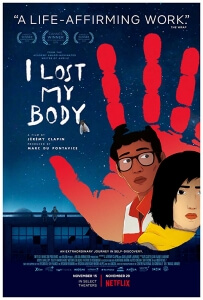 BASICALLY…: A dismembered hand sets out to be reunited with its body, that of an aimless young man named Naofel (Patel/Faris)…

I have now seen this movie twice – the first was for a press screening before its debut at this year’s London Film Festival – and both times I have been extremely impressed with the shining originality that I Lost My Body has to offer.

Originally produced in French (the film will also have an English dub for its upcoming Netflix distribution), the largely hand-drawn animated film starts off in a dissection lab, where a severed hand suddenly springs to life and escapes the fridge from which it and several other body parts from eyes to a full brain are being kept. It immediately sets out on a journey to be reunited with its owner, young Moroccan delivery boy Naoufel (voiced by Hakim Faris in the original French version, and by Dev Patel in the English dub) whose memories we see constantly throughout the film, from him going to live in Paris with a neglectful relative following the death of his parents, to finding a potential soul mate in a young woman named Gabrielle (Victoire Du Bois/Alia Shawkat). His fascination with the latter will ultimately end up with him being separated from his hand, but in what capacity? More importantly, how on Earth does a film about a sentient hand that uses its fingers to wander about like Thing from The Addams Family not manage to fall completely into WTF territory?

With a lot of tender care, as it turns out, from director Jérémy Clapin – who co-wrote the film with Amélie screenwriter Guillaume Laurant, who in turn adapts from his own novel Happy Hand – which makes all the difference in the world. Clapin makes the overall journey seem not only fantastical but also spiritual, as it dives deep into the inner workings of human emotion and our connections to our senses of touch, sound and sight (not so much taste and smell, though that’s probably a good thing because nobody really wants to know what a severed hand tastes or smells like), in ways that feel poignant, heartfelt, and even a little bit intense. If a film like Inside Out personifies our emotions and uses them to illustrate what goes on in a child’s mind, this film takes the concept of fantastical representations of our deepest feelings and brings it up to a whole new, and slightly more mature, level. By having it be a film of two halves – one focusing on the hand, and the other on the life of young Naoufel before his untimely separation – we can easily see how those senses affect both parties; in the case of the hand, they prove to be vital if it is to survive the journey it goes on; while Naoufel takes them a bit more for granted, choosing to wallow in his own misery (though, to be fair, his life up to this point hadn’t been exactly the happiest, so it’s only natural for this guy to be pretty down about most things) instead of grasping what is truly important in life. Clapin and Laurant cleverly work these themes in without being too obvious about them, challenging the audience to read between the hand-drawn lines and unearthing some real human emotion going on within the main context.

Those lines, incidentally, are utterly beautiful. Here, the animation combines both 2D and 3D techniques so that it has the rustic, jumpy hand-drawn style – kind of like Studio Ghibli with rougher designs – and the world-building, realistic feel you’d normally find in a CGI cartoon nowadays. As a result, you not only feel the weight and size of the world that this hand now has to make its way through (rats and pigeons have never felt more terrifying, nor have frozen ponds or busy motorways), but it makes the whole thing feel more real, lived-in, and completely down-to-earth. The same can be said for the world as experienced by Naoufel himself, with so much detail put into raindrops and dingy apartments that it would almost be enough to pass as the real thing (minus, of course, the fact that it’s all blatantly a drawing). There is also something to admire about how jolty the animation is as it goes from one frame to the next, appropriately giving it the feel of something that was crafted almost exclusively by hand, while also adopting certain techniques which the likes of Studio Ghibli or even classic Disney would use without hesitation in one of their own animated outings. The way the colours shift in and out, how it uses night-time imagery, and the simplistic but gorgeously detailed designs of the characters and environments, it all makes the film a true must-see for any animation geek.

If there were slip-ups with the film, it would purely be from a narrative standpoint, namely its decision to use a couple of well-worn tropes during Naoufel’s story which feel somewhat tacked on. It doesn’t hinder the movie all that much, but it does grind the movie to a halt so it can let these particular clichés play out, and for a movie that is otherwise thoroughly original it is unfortunate that it has to occasionally rely on something so familiar to get itself out of a tight spot.

If that’s really the only major criticism I have about this movie, then that’s quite an achievement for what is sure to be one of the best animated films to be released this year. It’s easy for a movie like this to get swept under the rug – not only due to its exclusive distribution on Netflix, but also because Frozen 2 is gathering the attention of most animation enthusiasts right now – but don’t let it completely slip between your fingers; one of the year’s most impressive and original films is right there in the palm of your hand.

I Lost My Body is a breathtakingly original piece of animation, with the concept of a dismembered hand searching for its owner proving to be the basis for a deep and meditative look at life and its many oddities, all on top of some gorgeous and appropriately rustic animation which makes it one of the year’s most impressive and worthwhile animated features.

Find it on Netflix from Friday 29th November 2019