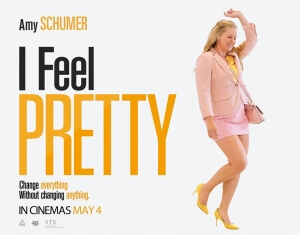 BASICALLY…: Renee (Schumer) suddenly finds herself to be incredibly beautiful after a knock to the head – only in reality, nothing about her appearance has changed at all…

As I mentioned during the last review I did of an Amy Schumer comedy, that one being Snatched, I fail to see why the Internet has such a hate boner for the comedienne – whether it’s just a bunch of right-wing trolls who have made it their pathetic mission in life to dislike everything she does simply because of her political status, or it’s a group of people who really don’t find her all that funny, I personally don’t think that Amy Schumer is worth such intense hatred or general dismissiveness.

Her movies, on the other hand – or more specifically, the ones that she stars in that aren’t exclusively written by her; see Trainwreck, for which she did both write and star, as a positive example – are largely unworthy of her natural comedic talents, and her latest film I Feel Pretty is yet another film that doesn’t utilise its talented star in the best way possible, only unlike Snatched there’s really not a lot about it that can even be considered amusing.

In a slight twist on the magical realism plot of a normal person suddenly finding themselves to be different in some way, Schumer plays Renee, a woman struggling with a severe lack of confidence because she doesn’t feel as though she’s pretty enough to compete with other more attractive women in society. During a spin class, she suffers a heavy blow to the head and wakes to find that her body has magically transformed into that of a skinny, beautiful lady; but the thing is, in reality she hasn’t changed her appearance at all, and she is merely under the delusion that she is now super-hot. With a newfound confidence and unashamed recognition of her good looks, Renee uses it to improve her life, from nabbing a receptionist position at the make-up company where she works, to finding a boyfriend (Rory Scovel) who admires her for her self-love.

It’s hard to know exactly whether the filmmakers set out to make this film a send-up of films like Big (which is shown during the film), 17 Again and 13 Going On 30, but the way that I Feel Pretty plays out is like it just is one of those movies, and unfortunately not one of the good ones. This script, written by Abby Kohn and Marc Silverstein who also directed the film, is comprised of a lot of jokes that fall flat more often than they land, and because of that it’s not only awkward to watch these gags try and fail to get a laugh, but it’s also largely very boring because scenes will just go at a snail’s pace without many of their attempts at humour working like they should. In addition, because it’s an old formula at work here – slightly altered, certainly, but still an old formula nonetheless – it’s not that hard to predict everything that’s going to happen, and more often than not it does indeed occur, so there’s no investment in this story or even the characters because you’ve seen it all many times over. The movie pads itself out to an hour and fifty minutes just because scenes will drag on and on, and plot threads will become more prominent when instead they could be cut out of the film entirely (the whole sub-plot involving Schumer and her equally not-as-attractive friends played by Aidy Bryant and Busy Philipps could and should have been scrapped entirely, because it goes in the exact direction you think it’s going to go), which just make the film a largely unentertaining bore.

Even though this is not the sort of comedy that Amy Schumer is really made for – again, watch Trainwreck for a good example of how she can not only write a funny and sophisticated comedy, but also act well from both a comedic and dramatic standpoint – she still sets out to give a meaningful and energetic performance here, and luckily she is a good enough actress to sell scenes that even she can’t make funny, and remains watchable in a film that is otherwise so uninteresting and dull. She has a nice chemistry with her on-screen love interest Rory Scovel, and bounces off other co-stars neatly, including Michelle Williams in a rare full-on comedic role that sees her reprising her Marilyn Monroe voice from My Week With Marilyn albeit in an entirely different context, which help to reinforce how Schumer can have a strong screen presence regardless of the quality of movie she’s in.

But again, not even Amy Schumer can save I Feel Pretty, which is such a drab and unentertaining waste of a strong comedic talent.

I Feel Pretty is a largely wasteful comedy that more often than not fails to get many laughs, and heads in a very unentertaining and boring direction which not even the willing participation of Amy Schumer can save.