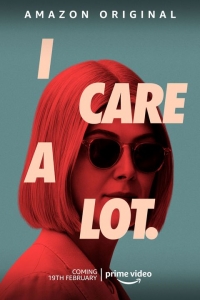 BASICALLY…: A crooked legal guardian (Pike) gets more than she bargained for when she cons an elderly woman (Wiest) with surprising criminal ties…

Rosamund Pike has played her fair share of wrong’uns over the years, from Bond villains to wives of Nazis to plane hijackers, to her Oscar-nominated turn as the deranged Amy Dunne in David Fincher’s Gone Girl. However, in I Care A Lot, she’s playing perhaps her most evil character yet – and goddamn, does she play this kind of role far too well (enough to make me think, “she seems nice in interviews, but is this woman actually a psychopath in real life?”).

Pike’s fierce – and freshly Golden Globe-nominated – turn in writer-director J Blakeson’s pitch-black satire is devilish to the extreme, and carries so much of this incredibly entertaining movie, where the very worst of humanity is on full display out in the open, but the way in which this society chooses to favour those who lie through their teeth and claim to be doing right by people allows them to practically get away with it.

In the film, Pike plays Marla Grayson, a court-appointed legal guardian whose job is to swiftly step in and take control of elderly people’s finances when they are no longer deemed fit to care for themselves. Unbeknownst to everyone, though, Marla and her business/romantic partner Fran (Eiza González) are common grifters, falsifying medical records to place elderly persons in their care, essentially imprisoning them in care homes, and then liquidating all of their most valuable assets while taking the lion’s share of wealth for themselves. Marla’s latest target is a woman named Jennifer Peterson (Dianne Wiest), a retired but fully independent woman who is very quickly stripped of everything from her home to her possessions to her entire freedom; however, what Marla doesn’t know is that Jennifer has a son, Roman (Peter Dinklage), who also happens to be a powerful and ruthless gangster who’s not too pleased when he learns of his mother’s predicament. It’s now up to Marla to use her wit and intelligence to outsmart Roman, and claim what she believes is rightfully hers.

Except, do we really want her to succeed? Sure, she’s going up against a violent mobster, but you could argue that Marla is a thousand times worse than he is; she is thoroughly rotten all the way to her core, taking full advantage of people’s ignorance and greed to manipulate judges and doctors into fulfilling whatever dastardly request she makes, all under the pretence that she’s doing it because she “cares” greatly about the elderly people she claims to be protecting. Marla is an anti-hero with an unquestionably nihilistic view of the world, yet she is also a master manipulator, with a dry wit and a cold, icy stare in her eyes where there quite possibly was once an actual soul. Blakeson’s impeccable writing and, of course, Pike’s fiery lead turn equally give this character an edge that not many creatives would probably have the balls to depict so casually, commentating so eloquently and even subtly on the dog-eat-dog world of capitalism that allows this kind of despicable behaviour to thrive. Even though you find yourself hating almost everything she says and does here, at the expense of incredibly vulnerable old people whose cash flow she sucks from them like a vampire, Marla is a character you’re alarmingly hooked on and eager to see how, not if, things will ultimately work out in her favour, despite the moral wrongness of it all.

I Care A Lot sees Blakeson back to making the kind of daring and unpredictable thrill rides he hinted at with his debut feature The Disappearance of Alice Creed (between that and this, he also directed the forgettable YA movie The 5th Wave, and the controversial miniseries Gunpowder with Kit Harington, both of which are enormously eclipsed by this movie). It is a vividly directed film, accelerating whenever it needs to while also remembering to let the style step back and let these characters be actual people; this even applies to Peter Dinklage’s Roman, arguably the one with the more heroic arc between the two leads, for at the end of the day he’s just a guy who’s trying to get his mother free from this evil person’s clutches. The filmmaker manages to elicit a sense of anger all the way throughout, not just from what Marla is doing, but also from the system in place that is letting her build an entire scheme revolving around her ripping off old nans and granddads. I Care A Lot has a fair amount to say about the ruthlessness and greed of capitalist entrepreneurs, especially those who are more than willing to bend the rules in their favour, and nowhere is this further shown than during a final reel where we get to see just how far someone like Marla can go with her dreadful scheme, all under the eyes and noses of the media and the compliant law-abiders who, according to our lead, are mostly willing to play ball because there’s no other option.

It’s frightfully entertaining in how it pulls off both a compelling social commentary on these types of industries, and a thrilling character study bolstered by some excellent performances right across the board, particularly from our leading lady. Pike will perhaps always be known for Gone Girl, and for good enough reason, but in I Care A Lot her ability to play just the worst people who you still have some level of empathy towards (even for the flimsiest of reasons) is properly solidified, and it kind of makes you terrified as to what type of horrible person she’ll be down for playing next.

Again, I have no doubt that Rosamund Pike is a lovely person in real life, but movies like I Care A Lot leave me rather fearful of her, in the best ways possible.

I Care A Lot is a devilishly entertaining pitch-black comedy that sees lead actress Rosamund Pike play her most evil character to date, and as ever she knocks it out of the park with an icy anti-hero that’s both well-written and vividly directed by J Blakeson, who through some choice decisions puts on display an ugly look at the greed and ruthlessness of people willing to bend the rules of capitalism for their own gain.

I Care A Lot is now available on Amazon Prime Video.