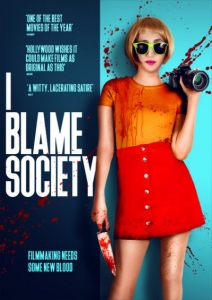 Now that UK audiences have finally had a chance to watch Promising Young Woman, there’s no doubt that people are starting to become more accepting of films with female leads who don’t always have to be likeable or even exhibit good morals. However, if the public response to filmmaker Gillian Wallace Horvat’s super-dark meta satire I Blame Society says anything, it’s that we’re still a long way off from being completely on the same page as each other, for despite a strong 88% critics’ score on Rotten Tomatoes (as of writing), the more audience-friendly IMDb score ranks Horvat’s film at a rather low 4.7 out of 10.

Is it a representation of how divided critics and audiences seem to be nowadays? Or, more likely, is it a sign of how the vast majority of IMDb users have a serious problem with female-led movies that don’t conform to their conservative view of women (keep in mind, these same people review-bombed Captain Marvel and the 2016 Ghostbusters reboot for the mere crime of having extra-dimensional women in lead roles)? It definitely feels like the latter, and funnily enough it’s those exact conformities that Horvat takes aim at in a film which, aside from being an amusing pitch-black thriller with fun DIY filmmaking attributes, really lets loose on an industry which frustratingly still refuses to take female filmmakers with powerful, unique voices seriously.

Horvat, in addition to directing and co-writing the film with Chase Williamson, also stars as a fictionalised version of herself, who is repeatedly running into brick walls with her career, as her manager has just dumped her and meetings with dunderheaded movie executives cynically looking for strong female leads and intersectionality ending in a virtual stalemate. Desperate, she decides to reignite an abandoned documentary project that puts herself in the spotlight and simply asks: would she make a good murderer, and could she actually pull it off? Initially using her friend Chase’s (Williamson) hateful girlfriend, whom she refers to as “Stalin” (Alexia Rasmussen), as a hypothetical template for the perfect victim, Gillian soon immerses herself all too deeply into the life of a serial killer, capturing every gory detail on camera for the sake of her own artistic integrity.

The central idea of a crazed filmmaker going to extreme lengths to preserve their artistry, while not the freshest to have ever been concocted, is here given a devilishly fun post-modern spin by Horvat, who isn’t the slightest bit afraid of portraying herself as someone who you really don’t want to root for as they become more and more out of control. The intentional unlikability is part of what also makes her film an eye-opening criticism of the way that society, through the power of film, cannot entirely comprehend the idea that a woman can be just as much of an anti-hero as a man; throughout, we see her get stonewalled left and right by (predominantly male) executives and agents, who oppose her ideas for being too political and having lead characters who do not earn their sympathy because they do not conform to their idea of a strong female protagonist. There’s an interesting conversation to be sparked from this film about the treatment of women in Hollywood which, even after #MeToo first became prominent, still shows that a lot of progress needs to be made, and while Horvat doesn’t exactly take the subtlest of routes towards her point, the fact that there is enough of a discussion to stem from it is enough to at least make you appreciate her approach.

Horvat also delights in the low-budget restrictions of her production, which see her incorporating some fun DIY filmmaking tricks to replicate the look and feel of a fly-on-the-wall documentary made on a shoestring budget. She uses her phone and several GoPros as additional cameras, and later on even introduces a rickety hand-cranked device to act as a camera dolly; the acting intentionally doesn’t feel rehearsed, resulting in a lot of natural performances by a lot of people who are, like Horvat, playing heightened versions of themselves; and even as her on-screen persona becomes more and more unstable as a person, the filmmaker doesn’t waver in giving a natural, accurately timed sense of humour which adds to the very darkly comic tone (right after committing her first kill, she decides to jump instantly into a lively makeover montage).

Though at times the film feels somewhat uneven, introducing certain characters and plot points which ultimately don’t lend much to the overall arc, I Blame Society is a fun little satire that requires a stomach of steel to handle its dark material, but the level of passion in this low-budget filmmaking is admirable enough to make it a decent calling card for a filmmaker who you cannot blame for their frustrations with the current system.

I Blame Society is a fun, if occasionally uneven, pitch-black satire that sees writer-director-star Gillian Wallace Horvat spark intriguing discussions about the undermining of female filmmakers in Hollywood while also being unafraid to challenge gender stereotypes, in addition to delivering a gory, fierce and devilish story about a crazed artist going to extreme lengths to preserve their integrity.

I Blame Society is now available to rent or buy on digital platforms, including Amazon Prime Video.