I Am Woman (Review)

I Am Woman (Review) 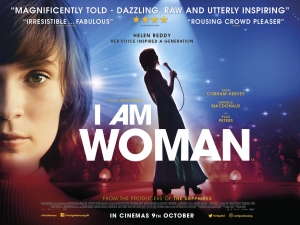 BASICALLY…: In the 1970s, Australian singer Helen Reddy (Cobham-Hervey) becomes an instant sensation for her feminist beliefs and songs…

So much has happened over the last few weeks – on top of everything else that’s been going on – that the news of a feminist icon suddenly passing away can easily get lost in the mix. Australian superstar Helen Reddy, best known for her 1970s anthem “I Am Woman”, sadly died at the age of 78 last month, leaving behind a legacy defined by her strong-willed fight for gender equality, and her inspiration for oppressed women everywhere with her soothing and powerful lyrics.

Such a legacy is the prime focus of the now awkwardly-timed new biopic named after Reddy’s most famous song, which certainly documents the rise and personal pitfalls of Reddy during her prime years, but ultimately succumbs to numerous genre conventions which don’t make it an especially memorable example of the pack, despite its good intentions.

Things kick off in 1966, when Helen Reddy (Tilda Cobham-Hervey) travels from Australia to New York with her young daughter Traci and her dreams of making it big as a singer. After struggling to pay rent with a low-key lounge gig – where she gets paid less than the male band members, despite her being the lead singer – she crosses paths with Jeff Wald (Evan Peters) who decides to become her manager, with the two of them soon getting married and moving to Los Angeles. Soon after, Reddy’s singing career begins to take off, but it’s not until Reddy is inspired by the growing women’s liberation movement that she pens a song titled “I Am Woman”, which soon becomes the unofficial anthem of the movement and sends both Reddy and Jeff into the stratosphere – until a mix of arrogance and drugs (mostly on his end) threatens to derail everything they’ve worked so hard to achieve.

There are notable things about the movie, which do place it just above sub-par in the music biopic catalogue; for one, Tilda Cobham-Hervey is showstopping as Reddy herself, exhibiting a no-nonsense swagger that makes her rendition of Reddy both charismatic and ultimately sympathetic, especially as we see her later years. The actress has you immediately on her side, because not only does she show the singer’s frustrations when it comes to facing the male-dominated industry she’s keen to enter – an opening scene between her and a condescending music executive feels extremely off-putting in a post-Weinstein world – but even when facing personal blows or unexpected devastations, she strives to not let her vulnerable side show and keep a stern, strengthened face whenever she can. Not to mention, she can lip-sync to Helen Reddy like it’s a second language. In addition, Evan Peters is also really entertaining as Jeff Wald, who more and more over the course of the film turns into a coke-snorting monster, but even then he is humanised enough to not be a complete cartoon. Their relationship is a major plot strand here, and you can see where director Unjoo Moon felt it best to show exactly how their partnership – both professional and personal – deteriorated over time, which does make for some very dramatic scenes between the two actors.

However, the film ultimately opts for a formula that’s tried and tested, which can work with the right material but doesn’t make it feel any less familiar. It’s the same problem with Bohemian Rhapsody, in that it’s about a musician who defied convention and essentially became their own style of music, yet the film about their life is about as close to conventional as you can get. Beyond Cobham-Hervey’s lead performance, there isn’t much here in the script that suggests that Helen Reddy was any different than any other female singer before her, despite the real-life Helen Reddy’s devotion towards pro-feminist causes and her lifelong campaigning for such a profound movement at the time. Even Reddy’s friendship with writer Lillian Roxon (played by Danielle Macdonald) is largely simplified, to a point where some of their scenes together only serve to remind viewers of Roxon’s eventual fate with little consideration to instead developing her as an actual character. Overall, the implication is that her life was remarkably similar to the ones glimpsed in other biopics like Lovelace or What’s Love Got to Do with It, complete with a toxic marriage to an increasingly unhinged psychopath, which for any long-term fans of Reddy must come as a disappointment that her life and the many achievements she made beyond her music aren’t celebrated as much as the very basic facts.

It certainly isn’t the freshest music biopic ever made, but I Am Woman isn’t among the worst either – not even close, honestly. It’s well-made, with director Moon injecting as much life and splendour into the material as she can, it’s well-acted, particularly by Cobham-Hervey who is stunning in the movie, and for what it can muster from its safe script, it does have a crowd-pleasing quality to it, especially during the emotional finale which almost rivals Bohemian Rhapsody’s climactic Live Aid sequence (at least in size). It’s a film you can watch leisurely in the moment, but forget about not that long afterwards; that doesn’t exactly bode well for its longevity, but in the moment it’s fine, if largely unremarkable – a far cry from the woman herself.

I Am Woman is a standard music biopic which has a number of admirable qualities, namely Tilda Cobham-Hervey’s showstopping lead turn as Helen Reddy and a fine crowd-pleasing tone, but its desire to stick with tried-and-tested genre conventions ultimately prevents it from being as memorable as some of the other, more risky biopics out there.