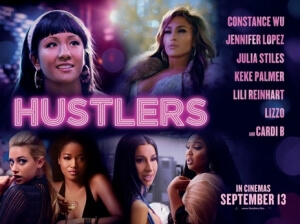 BASICALLY…: A group of strippers team up to rip off their wealthy Wall Street clients…

A film like Hustlers has needed to happen for some time now – there have been far too few mainstream movies that have tackled sexuality from a woman’s perspective (because God forbid the ladies get to have as much fun exploring their kinks as the guys do), and especially ones that encourage them to embrace themselves for it rather than shame them. Now that we live in a post-#MeToo world, female stories that would never have been told twenty or even ten years ago are finally starting to come more into the spotlight, so what better time than now to finally have a film out that allows women to flaunt their curves and beauty while not only loving every second of it, but also not letting themselves be solely defined by it?

It’s the key appeal of this movie, but beyond that it is a very entertaining film with style, substance, and knockout performances by actresses that are having the time of their life here.

We are first introduced to Dorothy (Constance Wu), a dancer at a New York strip club in 2007 under the name “Destiny”, where she initially struggles to attract clients and earn enough money to support her and her grandmother. She finds a friend in Ramona (Jennifer Lopez), a more popular stripper who shows Destiny the ropes and helps her be the very best version of herself in the club, but the 2008 financial crisis soon puts a stop to the club’s wealthy Wall Street clients showing up in droves. Unable to find other work, she is soon enticed by Ramona into a scheme where she and fellow strippers Mercedes (Keke Palmer) and Annabelle (Lili Reinhart) scam their wealthy clients by maxing out their credit cards while they’re intoxicated, a scheme that seems to pay off until reality starts to settle in.

It is based on a New York magazine article by Jessica Pressler (which you can read here, as it’s a fascinating read), and while the film does have a foot in reality in that regard, the way it flows from one scene to another and how it sets up these characters as being well-rounded and entirely believable is like something out of a dream. Although what these women are doing is clearly illegal, you do sympathise with their cause as well as their in-it-for-themselves mentality, because the script – written by the film’s director Lorene Scafaria – actually allows these characters to be human and not some shrill cardboard cutouts; there are entire scenes of these people just having conversations with each other, whether it’s in the dressing room at the strip club where Cardi B and Lizzo make memorable cameo appearances, or even at a dinner table during Christmas, and you get so much insight into these people just from the little things they drop into their back-and-forths that you really get an understanding of who they are as people. Scafaria paces the film well so that the growth and development of these characters also don’t feel too rushed or out-of-nowhere, and instead they are worked in naturally into the plot and come to light exactly when they need to.

Performance wise, this is an opportunity that has not been wasted by a single actress in this film. Constance Wu, fresh off of her breakout movie role in last year’s Crazy Rich Asians, continues to be a very skilled performer who completely slips into the role with incredible ease, and is more than capable of carrying most of this movie by herself. The woman of the hour (and fifty minutes) is, as you might have already guessed, Jennifer Lopez; the moment she first appears in this film, exhaling confidence like it’s the air in her lungs – and, if she doesn’t mind me saying it, still looks absolutely amazing – it’s clear this is a game-changer for anyone who ever scoffed at the very mention of her name in the past. She owns every second of her screen-time, doing and saying things you’d never see her do in the numerous rom-coms she’s been involved with recently, very clearly having an absolute ball as this very complicated but empathetic character. She and Wu have wonderful chemistry together, making theirs a friendship that you can truly buy without feeling contrived in any way shape or form, and together they form the heart of this tricksy and stylish crime drama. Those who are going in to this only because Cardi B is in it should know that she is really only in it for a few scenes before disappearing entirely, but what little screen time she has she’s fun in, even though she’s basically playing herself in all but name (although, as someone who is an unapologetic fan of her music, that’s not necessarily a bad thing).

There’s very few things about it that don’t entirely work – a framing device set around an interview that would later inspire the article feels largely unnecessary – but the positives greatly outweigh the things that aren’t so good. This is a fun, extremely entertaining movie that more people should be checking out, especially if they want to see more films that break the mould and embrace female sexuality in front of as wide an audience as possible. I really hope this movie performs well with people, because the possibilities it could open up are endless, and more than overdue.

Like the strippers sliding up and down on that pole, it’s empowering, it’s intriguing, it’s incredibly sexy, and it makes you want to spend all of your money on it.

Hustlers dances its way to being an extremely entertaining crime drama with strong and very much needed themes of female empowerment and friendship at its core, including knock-out performances by Constance Wu and an absolutely sensational Jennifer Lopez. Make sure you have plenty of money; you’ll want to blow your wad all over it.

Want to decide what the movie’s like for yourself?
Check out Hustlers showtimes in London
via