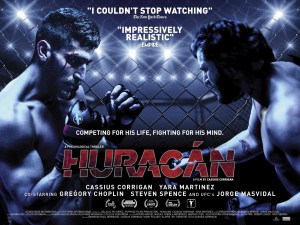 BASICALLY…: An aspiring MMA fighter (Corrigan) battles with his personal demons as he is diagnosed with Dissociative Identity Disorder…

“What if Rocky were more like Fight Club?” For his directorial debut Huracán, which he also writes, produces and stars in, Cassius Corrigan obviously had that mash-up on his mind, and to his credit he mines as much out of that idea as he possibly can in a film that examines mental illness in the world of Mixed Martial Arts – in other words, a literal fight club.

Although, Corrigan isn’t just all about the punches and kicks; he is also able to examine the psychological impact of living with serious mental health, and how instead of properly treating the illness it can be enabled for something that by all accounts is not the right thing for them to be doing in the first place. While it might be a little rough around the edges, it’s a sure sign that Corrigan is someone to keep more of an eye on.

Corrigan plays Alonso, a convict based in Miami, where he’s out on parole and forced to regularly see his therapist Isabela (Yara Martinez) as part of his condition for release. Barely able to afford rent and working a lowly construction job, Alonso turns to a local MMA gym where he aspires to become a professional fighter, and during a tense sparring session something takes hold of him – we know this, because the screen turns a shade of blood-red every time – which unleashes a ferocious force that easily overpowers his opponent. As it turns out, Alonso – who we learn has had a history of mental illnesses and childhood trauma – has been diagnosed with Dissociative Identity Disorder, and that aggressive being is just one of his multiple personalities, whom Alonso has named Huracán; Alonso must now try and preserve his alter ego for the ring, as egged on by his ruthless coach Antoine (Grégory Choplín, a real-life Muay Thai champion), but it isn’t long before Huracán starts to take too much control of Alonso’s state of mind.

Featuring a largely Latinx cast, most of them made up of non-actors making their performing debut here, Corrigan’s film is a promising step forward for representation in the MMA sporting genre, which usually tends to favour a whiter narrative (see: Warrior, Never Back Down, and that largely forgotten Kevin James comedy Here Comes The Boom) and follows a particular formula not dissimilar to the standard sports movie structure. Huracán, on the other hand, is more of a character study which happens to have MMA fighting in it, and Corrigan is able to keep the focus tight on his character’s struggles to keep himself and his newfound personality at bay, before he can get himself into more hot water than he soon finds himself in. There’s a stark realism at the heart of Corrigan’s script, direction and central performance, which makes you feel every single blow to the body that he takes or gives, as well as the growing frustrations he faces in other parts of his life; when he’s inevitably fired from his job, you can feel the anger that is Huracán bubbling up inside of him despite his attempts to remain calm, and when he emerges it literally feels like a complete switch from one person to the next. On-screen, he gives the role all that he’s got, and as a storyteller he spaces things out evenly – in chapters, no less – so that the audience can absorb the journey his character is going on, one startling revelation at a time.

While Corrigan is no doubt putting all of his energy into delivering an interesting enough story with a strong lead performance and stylish direction, there are also a few first-time filmmaking holes he manages to get himself into. While for the most part the editing is sound, there’s the odd cut or fade that feels a little out of sync with the rest of the scene, and it manages to stop whatever mood it was aiming for right in its tracks. There’s also the limited role that women play in the film; aside from Yara Martinez’s Isabela character, nearly every other female here is either a helpless victim of physical or sexual abuse that the male lead feels that he alone must avenge at all costs, and even Isabela herself is largely reduced to a role defined only by her support for Corrigan’s Alonso. Then there’s a number of implications that Corrigan seems to be making about the treatment of DID itself, which can seem like it’s one of those “movie illnesses” where it appears that a complex mental health diagnosis can be cured almost instantaneously, which of course does not happen in real life, and dampens the emotional impact of Alonso’s acceptance of it being a lifelong barrier with only experimental treatment helping him along the way.

For all his mistakes, though, Corrigan is able to deliver an interesting enough film that dives as deep as it can into its subject matter, and while it doesn’t always work he’s shown that he’s at least competent enough for this level of intricate filmmaking. Huracán isn’t always a knockout, but this fighter’s got some spirit in him.

Huracán is a formidable debut feature for director/writer/star Cassius Corrigan, who is able to deliver a compelling character study about mental illness within the MMA field which doesn’t always work, but has enough strengths to survive at least a few rounds.