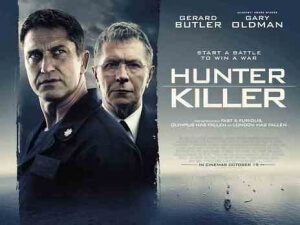 BASICALLY…: The Russian President is captured during a coup, and a US submarine crew is called in to help the situation getting a lot worse…

From 1967 to 1994, Cannon Films – a division of The Cannon Group, Inc. – made a collection of B-movies that didn’t cost much to make and weren’t necessarily of high quality, but still managed to tap into the public’s desire for a certain type of schlock, especially when Israeli businessmen Menahem Golan and Yoram Globus reformed the company’s business model in 1979. Among the many movies made under Golan and Globus’ rule were Enter The Ninja, several Chuck Norris vehicles including The Delta Force, and notoriously bad sequels like Superman IV: The Quest For Peace, Breakin’ 2: Electric Boogaloo, and the Charles Bronson-led follow-ups to the original Death Wish, all of which were regarded as inferior to most Hollywood movies with their notably low budgets and largely terrible scripts being rushed into production.

I bring up Cannon Films only because Hunter Killer is exactly the kind of film they would have made back in the studio’s glory days; something that was clearly plucked out of the bottom of several terrible scripts and rushed into production without polishing it up a little bit, rounding up recognisable actors looking for an easy paycheque to just stand around barking orders and not much else, and incorporating some very questionable (to say the least) effects that make it look like an implausible and laughably fake-looking cartoon half the time. The key difference is, unlike a Cannon film, Hunter Killer is a really, really dull sit with nothing to offer, even in the so-bad-it’s-good category, and is something that everyone involved is so much better than.

When a Russian and an American submarine suddenly explode deep within the waters of the Russian peninsula, rogue submarine captain Joe Glass (Gerard Butler) takes a vessel to investigate. Meanwhile, on land, a Russian general (Mikhail Gorevoy) initiates a coup that disposes the Russian President (Alexander Diachenko) and gives him access to start a nuclear war for some inexplicable reason. To sort that mess out, a just-as-disposable group of US Navy SEALS (led by Toby Stephens doing a Gerard Butler impression in a movie that also has Gerard Butler in it) is dropped into the country to rescue the Russian President with Glass’s vessel on standby to pick them up – all while a shouty pre-Oscar Gary Oldman, a bored-looking Common, and Linda Cardellini for no reason watch from the comfort of their base in Washington.

For all its promise, especially with a misleading trailer that seemed to suggest that Butler was going to slip back into action movie mode – even though in reality, all Butler does for most of it is stand around in the same control room barking orders at his crew – this is such an uninteresting movie, kind of like if Crimson Tide or The Hunt For Red October were made by stupid people, for stupid people. Nothing about this plot or why some of the characters do what they do makes sense, but it’s under the pretence that it’s this grand action-thriller that’s way more epic and exciting than it actually is. For most of the movie, the people we assume are going to be kicking ass by the end of it – especially Butler, who has gained quite a fan base with some of his schlocky action projects like Olympus Has Fallen and even Geostorm – just stand around and do next to nothing, in tension-less scenes where you don’t care about anyone or what the stakes are, because it’s so boring and tedious to watch. You’re almost wishing something as crazy as anything in Geostorm would come along to liven the flick up a little bit, because at least something interesting would be happening, even if it was complete and utter bollocks; but nothing of the sort happens in this one, and the results are B-movie schlock at its most sluggish, which I imagine not even Cannon Films would be proud of shoving out there if they were around today.

Talking of Cannon Films (again, in a review of a film not even made by them but probably would have been), sometimes even they had better effects than the horrible CGI used in this film. You know you’re in a rough sit when the first shot of the film is of an iceberg that looks so bad that it wouldn’t pass as a background prop in Norm of the North; the multiple shots that follow of submarines underwater aren’t any better, and I swear that at times the CG models of said submarines they used in the middle of the action aren’t even rendered properly. The only convincing effect in the whole movie is the inclusion of actor Michael Nyqvist; not that it’s a CGI appearance or anything, but because the Swedish actor – who died about a year after production ended in 2016 – is the best part of the movie, certainly the only actor to actually feel like he wants to be there, and is playing by far the most interesting character. Unfortunately, even he tends to be side-lined by plots that go nowhere, characters who you don’t know or care about, and clichés that will make your eyes roll (wouldn’t you know it, one of the Navy SEAL team members has a loved one waiting for them at home; just guess what ends up happening to them), which undermine all of Nyqvist’s good intentions in what turned out to be his final role (the only other movie he had lined up before his death was Terrence Malick’s Radegund, but given how Malick likes to erase entire performances from his films, let’s go ahead and assume that Hunter Killer is indeed his final film performance).

This is a giant chore of a movie to watch, so much so that by the end I was getting so restless (largely because the drinks I had consumed throughout had processed quicker than I imagined), I ended up rushing out the auditorium once the credits started rolling to take a giant piss that was far more interesting and intense than the movie I had just sat through.

Hunter Killer is a giant bore of a submarine action-thriller which wastes its strong cast, including the late Michael Nyqvist, on a script that is basically The Hunt For Red October for stupid people, coupled with horrific CGI that’s embarrassing even for an uninteresting B-movie like this.