Hunt for the Wilderpeople (Review)

Hunt for the Wilderpeople (Review) 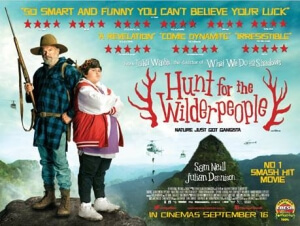 BASICALLY…: Young delinquent Ricky (Dennison) runs away into the New Zealand woods with his foster parent Uncle Hec (Neill), and are pursued by social services who think the young boy has been kidnapped…

Late last year, the gig of directing Marvel’s next big cosmic adventure Thor: Ragnarok, featuring not one but two of the brand’s most popular heroes in Chris Hemsworth’s Thor and Mark Ruffalo’s Hulk, went to a New Zealand filmmaker and actor by the name of Taika Waititi. “What?!”, most of the industry collectively exclaimed, “the guy who co-directed that vampire comedy What We Do In The Shadows? Sure, it was funny and all, but really? That guy? What could have possibly persuaded Marvel to hand the keys for one of the most anticipated films on Marvel’s upcoming rota to this guy?”

Hunt for the Wilderpeople is what persuaded them, and Waititi’s latest film should not have a difficult time winning over anyone still unsure about his participation, because it is a gem that perfectly balances oddball humour, outdoor adventure, and heartfelt comradery to make an exceptional film in its own right.

Taking place in the New Zealand countryside, an overweight teenage boy named Ricky (Julian Dennison) is brought to a foster family by social services, and is welcomed with open arms by the well-meaning but tactless “Auntie” Bella (Rima Te Wiata), but no so much by her grumpy husband “Uncle” Hec (Sam Neill). However, after tragedy suddenly strikes, and Ricky is to be taken to another foster family, Ricky runs off into the forest – or “the bush” – to live a life away from society, with Uncle Hec who soon catches up with him. Making things more awkward, a few misunderstandings lead the authorities to believe that Hec has kidnapped young Ricky, and so begins a long and gruelling manhunt for the two survivors.

Waititi, with this film, comes across as just having the most childlike sense of wonder and passion for the art of moviemaking, with every scene and almost every shot just oozing with absolute joy and underlying appreciation. It is a beautiful film to look at – which the always fantastic New Zealand backdrop greatly contributes to – but it’s also got some very raw themes going on underneath the surface. The subject of child endangerment comes up a number of times, with Ricky having been introduced as a young delinquent and wannabe “gangster” who is one bad experience away from being thrown into juvenile prison, and a conversation about a girl who recently passed via unknown causes, after apparently complaining about her foster father. There some heavy stuff that is being addressed in this movie, but Waititi doesn’t so much explore them in avid detail, but rather throw them in as little additives amidst a sea of absolute strangeness – and in this instance, it really works. There is just something in how Waititi approaches these heavy topics but does so in a way that ensures the audience first and foremost has fun, which is rather admirable in a time when a lesser filmmaker would put all their eggs in one basket and risk losing the entertainment factor in the process.

The main duo of Neill and Dennison are a perfect odd couple, the kind not seen since perhaps Up, which upon closer inspection this film shares a lot of similarities with. Think about it: an overweight and overeager kid teams up with a grumpy older man on an adventure in the strange and colourful wilderness, and they’re even accompanied by a dog. But Hunt for the Wilderpeople takes its own boy-and-old-man pairing and takes it to some new and exciting levels, with both of them having a certain disdain for one another but through the sharing of a recent tragic incident must come together and eventually grow something of a bond. Neill is great to watch as ever, but it’s Dennison who really steals the show as a kid who’s had a pretty rough upbringing after being abandoned by his young mother, and left in the untrustworthy hands of the foster care system, represented here by Rachel House as this steely and hilariously terrifying social worker who treats her job as though she’s Tommy Lee Jones from The Fugitive.

Speaking of which, when the film does turn into a manhunt, it is still entertaining as everything else in the movie, as the two come across and are pursued by several eccentric characters, such as a group of aggressive hunters, and a mad shut-in played by Rhys Darby, and even partake in a climactic car chase across the New Zealand landscapes. It’s here where Waititi gets to indulge in the mannerisms and over-the-top executions of the films that he undoubtedly grew up with, with that car chase looking and feeling like it could have easily come from an 80s film like Commando or even The Goonies. Like those films, Hunt for the Wilderpeople has this unmistakable and undisputed sense of joy, one that absolutely adores being able to show off its strangeness on the big screen, and is so charmingly made that you get the feeling that this is probably going to find its audience at some point if not right away (the screening I went to was nearly empty, which is a shame because it definitely deserves more of an audience than, say, Blair Witch).

There’s a lot about this movie I haven’t even gotten round to mentioning, but the beauty of this film is that it is best left unsaid until you actually see it. It’s an incredibly enjoyable adventure that’s sure to find its audience at some point, and one that you can see having a huge part to play in Waititi landing the Thor: Ragnarok gig.

Either way, Thor’s in safe hands.

Hunt for the Wilderpeople is a charming and highly enjoyable adventure film through which director Taika Waititi clearly demonstrates a clear passion and adoration for the art of filmmaking, putting together a fun story next to some gorgeous New Zealand backdrops, and injecting a huge sense of fun next to its tackling of some more serious issues.