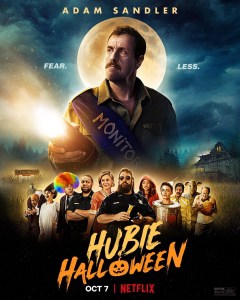 BASICALLY…: When an unknown force begins to terrorise a small town on Halloween night, it’s up to humble laughingstock Hubie (Sandler) to save the day…

During his awards campaign for his career-best turn in Uncut Gems, Adam Sandler jokingly made a promise to make a purposely bad movie if neither he nor the film received any Oscar nominations. Seeing how both Sandler and the movie were indeed left out of Hollywood’s biggest night, it’s time for Sandler to make good on that promise, with the joke being entirely on audiences everywhere.

His latest collaboration with Netflix, Hubie Halloween, is exactly what you’d expect a Halloween-themed Happy Madison movie to be: juvenile humour left and right, unfunny slapstick that defies basic laws of physics, and Sandler himself putting on one of his most irritating voices for the entire movie. I really shouldn’t be surprised that Hubie Halloween is as bad as it is, because I still clicked the play button knowing full well what I was getting myself into – but by God, this movie is insufferable.

Sandler plays Hubie DuBois, a lowly do-gooder in the town of Salem, Massachusetts, who for whatever reason is hated and picked upon by almost everyone else (I can think of a good few reasons why, though; more later). He loves Halloween, even though he’d jump at the sight of his own shadow, and as the town prepares their annual celebrations he dedicates himself to keeping the town safe, despite nearly everybody going out of their way to mess with him, whether it’s pranking him or throwing increasingly dangerous objects at him while he’s riding his bike. On this night, though, Hubie finds himself dealing with a mysterious force that is starting to abduct several people, not to mention the fact that there’s an escaped prisoner from the local mental institution on the loose, as well as how Hubie’s new neighbour (Steve Buscemi) might be a werewolf.

At this point, if you’ve seen a number of Adam Sandler movies, then you’ve seen this one too – except every now and then there’s a pumpkin in the background or people will be wearing ridiculous costumes. This is what he and his production company Happy Madison always do with their films: they appeal to the lowest common denominator with low-brow humour that normally involves farting, puking, urinating and defecating – often for no reason – and set it to a story that could easily be figured out by a toddler, with characters who are either dumb or wildly mean-spirited, sometimes all at once. There is no thought that went into this script, because of course there wasn’t; it’s the kind of movie that lays out all of its jokes and themes as though the audience were stupid enough not to pick up on them beforehand, and it constantly insults their intelligence by ignoring glaring holes in not just the plot but some of the over-the-top slapstick. None of it is even funny, because a lot of the jokes have a very juvenile quality to them that tend to ruin scenes that are otherwise opting for a completely different tone; June Squibb, who plays Sandler’s mother, delivers lines meant to be meaningful (or at least, that’s what the score is telling us to feel) while wearing shirts that say “Boner Doner” or “Muff’s Diving School”, and a dramatic speech near the end is undermined when a character says they’re horny for no reason.

Then there’s Sandler himself, who’s probably one of the main reasons why this movie is as intolerable as it is. We all know that Sandler can indeed act – just watch Uncut Gems for proof, if you haven’t already – but for whatever reason, in films he not only produced but also co-wrote like he did with this one, he appears to have very little investment in his own material. It’s not as low-energy like more recent turns in Pixels or The Ridiculous 6, but Sandler’s turn here is very bland nonetheless, and to make things more difficult he puts on a voice that’s kind of like a lispy six-year-old who’s only just figured out what words are, which we have to put up with for the entire movie. It quickly makes the character very difficult to be around, even though we are constantly told we’re supposed to like him despite his man-child tendencies and oblivious nature to basic societal norms. That is another common theme in Sandler’s scripts, where his characters are shaped to be likeable to a fault, while others are constantly saying what a good person he is and that anyone who picks on him is nothing more than a bully, but what the audience has picked up on that the movie itself hasn’t is that this character is someone who, if they existed in real life, would be disregarded by everyone anyway because he is an annoying, overly dumb person who cannot function in a normal society.

Again, what on earth did anyone expect from an Adam Sandler Halloween movie? It’s about in the same ballpark as Boo! A Madea Halloween (which not only also featured heavy pranking, but Lavell Crawford – aka Huell from Breaking Bad – pops up in it as he does here), although this movie at least has a much more ambitious approach than Tyler Perry’s attempt. Still, it’s not worth seeing unless you’re a hardcore Happy Madison fan, and even then you’re better off watching literally any other Halloween-themed movie instead.

Hubie Halloween is an insufferable comedy from Adam Sandler and his Happy Madison branch, which contains pretty much everything you’d expect out of one of his films, from the juvenile humour to an irritating Sandler performance, except there’s a pumpkin or spooky costume every now and then.