How to Build a Girl (Review)

How to Build a Girl (Review) 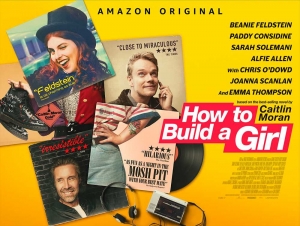 After leaving sizeable impressions in teen coming-of-age comedies like Lady Bird and Booksmart, Beanie Feldstein finally gets the headlining gig she’s been groomed for, in her own teen comedy to try and rival her other ones – only this one comes with a price: the LA native must adopt an authentic Wolverhampton accent if she is to bring the wild and flamboyant protagonist of Caitlin Moran’s semi-fictional memoir How to Build a Girl to life.

The good news is, Feldstein nails the indistinguishable Brummie accent almost down to a tee, and nails just about everything else with her performance. The film itself, however, is likeable and watchable enough, but stops short of exploring further than it probably should.

Feldstein is Johanna Morrigan, a 16-year-old living in 90s Wolverhampton, on a small council estate with her kind-hearted family, including past-his-prime rocker father Pat (Paddy Considine) who is struggling to keep the family financially afloat. She decides to put her promising writing skills to the test by applying for a rock critic position at a London music publication, which she initially finds great amusement in – especially when she meets and falls for rising music star John Kite (Alfie Allen) – but gets carried away with when she realises that the best way to leave a mark is to be as harsh and damaging as she can in her writing. She thus dons a new identity, the red-haired top hat-wearing Dolly Wilde, and begins to make friends, and tons of enemies, in the industry.

As a critic myself, it was amusing to see some of the pros and cons of the profession portrayed on-screen – seen as passionate and engaged by some, hated by most others – although of course I rarely go as over-the-top with my criticisms as the main character in this movie. The profession, however, isn’t the main focus; it’s much more about how Joanna asserts herself in a writing field that’s far less classy than her creativity will allow. She is clearly a bright and imaginative girl when we first meet her, to a point where she’s even having fantasy conversations with numerous historical and fictional characters on her bedroom wall (ranging from Sigmund Freud to Maria from The Sound of Music), but she soon learns that doesn’t pay the bills, and so in struts her wild alter-ego to tear rising bands a new one, who could not be more different to her original persona. It’s not exactly a fresh, new journey into adulthood – young person finds success, gets too carried away with said success, and eventually returns to their humble roots – but Feldstein, with her wide-eyed optimism and cheeky little grin, is a capable enough actress to sell the radical transformation in both appearance and personality, nailing both the shy innocence of Johanna and the assertive nature of Dolly without either feeling like they’re suddenly the complete opposite of each other.

I don’t know much about the “true-ish” story (as the opening title suggests) this is based on, having not read Caitlin Moran’s book nor having read up on much of her own backstory (though Moran does also provide the screenplay here, and it does feel like something that came from raw experience), but when it comes to depicting an industry well-known for its behind-the-scenes debauchery and cynicism, How to Build a Girl falls surprisingly flat. It feels as though the film never really addresses the darker side of the music industry, and the parts where it does (to an extent) feel a little glamourized and not as honest as it could have been; casual misogyny and sexual harassment, for example, is briefly hinted at during a few scenes, but it never goes any deeper than that, either ending the scene on a joke or an amusing sight gag instead of following up on any of it later on. For a film that depicts a young woman’s ascent into a male-dominated industry, surrounded by assertive machismo douchebags who creepily beckon women to sit on their laps when they’re having a conversation, it’s surprising that the movie isn’t more honest about any of that, especially for a young female audience who might view this film and get the wrong impression that it’s incredibly easy for women to succeed in toxic work environments such as this.

Even though it doesn’t get as informative or even as honest as it would perhaps like to be, the film does get by on a decent level of charm and sweetness that contribute to a healthy heart. Feldstein, of course, is very likeable in this, as are many of the supporting players from Paddy Considine to Alfie Allen to even Emma Thompson who shows up for a cameo role near the end of the film, and director Coky Giedroyc is clearly having fun bringing Moran’s eccentric words and characters to life, complete with quirky fantasy sequences that only an imaginative soul like Moran could come up with. It isn’t going to be on my end-of-year best list by any means, but as something to watch and have a pleasant enough time with until cinemas are properly restored to their full glory, How to Build a Girl is a fine enough vehicle for a fabulous leading lady-in-waiting.

Not bad for Jonah Hill’s younger sister (no, seriously, look it up).

How to Build a Girl is a decent and likeable enough coming-of-age comedy that showcases the formidable and charming talents of lead actress Beanie Feldstein, but a further insight into the male-dominated industry her character enters has a surprising lack of depth which feels like a slight missed opportunity to address some of the real problems women face in the world of journalism.

Want to decide what the movie’s like for yourself?
Check out How to Build a Girl streaming links
via