How To Be Single (Review)

How To Be Single (Review) 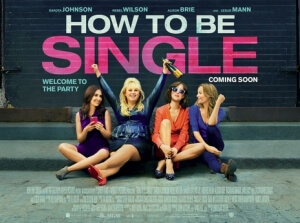 BASICALLY…: Eager to take a break from relationships, Alice (Johnson) follows the tutelage of the fun-loving Robin (Wilson) and learns how to have fun with her single status…

If you’re like millions of people on Valentine’s Day and are sick of the crass commercialism and guilt-tripping by the media that shuns you if you’re without a partner on that particular day, then get ready… to keep feeling like that, because if there’s anything that How To Be Single gets across in an otherwise scattershot movie, it’s that singular statuses have both their ups and downs but aren’t entirely worth moaning about (unless you happen to find someone, then in that case be with that someone – so yeah, the message is just as confused as the script to this thing).

Playing out like a prequel of sorts to Sex and the City – and not like that short-lived one that aired on The CW a couple of years ago – the film focuses on four women that are each taking certain precautions to their single nature, some of them getting more and more outlandish as the film goes on. Our main viewpoint, however, is Dakota Johnson as wide-eyed college grad Alice, who we first see putting a halt to her relationship with her college boyfriend Josh (Nicholas Braun) to experiment with living completely independently for the first time. Moving to New York, she is taken under the wing of party animal Robin (Rebel Wilson) who shows her how to loosen up and enjoy her non-commitment, and also meets good-natured ladies’ man Tom (Anders Holm) who himself starts falling for the pretty and increasingly-psychotic woman who’s moved into the apartment above his bar, Lucy (Alison Brie). There’s also Alice’s older sister Meg (Leslie Mann), a paediatrician who decides to have a baby via an anonymous sperm doner, essentially avoiding the long-term commitment with any kind of father figure – but of course, this being a romantic-comedy trying to pass itself off as something far more feminist than it is, that mind set doesn’t stick around for long.

From just reading that, you can probably understand why we feel that a lot of these plots don’t really gel together like they should; the movie would have honestly been just fine if it only focused on Dakota Johnson and Rebel Wilson getting into several antics, embracing their single nature while also developing their relationship, but then two other synopses from two completely separate rom-com scripts come in to mess things around.

The Alison Brie one, for instance, is something that you can erase from the film entirely and nothing would be changed or even affected in the overall plot, but while Brie is herself an endlessly watchable actress she can’t escape the fact that the character she is playing is logistically insane; she has set up several online dating profiles and formed an algorithm to narrow down her perfect match, but she’s also extremely clingy and obsessive, culminating in a pretty funny breakdown in front of a children’s reading session (or, at least, it’s funny because of Brie’s committed performance; that’s what prevents the scene from being an extremely disturbing mental breakdown). In addition, the Leslie Mann sub-plot feels forced into one script from another, one that is a far more conventional and clichéd film in the vein of Knocked Up or any other film of its kind that involves sperm doners and romance, especially when she starts meeting with, and eventually falling for, a lunk-headed hunk played by Jake Lacy.

Both of them not only feel like completely different scripts to the one we’re supposed to be watching, but they somehow serve to contradict the film’s very reason for being with their overall messages of finding someone to counteract your own journey of self-fulfilment, as opposed to the one that the very title wants to enforce. This is why the stuff with Johnson and Wilson is easily where the film is strongest, because their own goals – or non-goals, in Wilson’s case – reflect exactly what the film was clearly setting out to achieve, and the film refuses to cop out like it does with the other storylines and keep things headed exactly where they’re meant to be headed, and not be wildly taken aback by the very standards that Hollywood has placed on films like these. The final few moments of the film are especially refreshing in how they opt for something a little more meaningful than the traditional final kiss and zoom out to a wide shot you usually get at the end of romantic-comedies (something that even Deadpool is unafraid to point out). Johnson and Wilson themselves are great to watch, with the former in particular continuing to impress with films like this and A Bigger Splash in which she tries to prove she’s more than just the woman from Fifty Shades of Grey, and for the most part succeeding – although things will inevitably revert to the ways they were by the time the sequels come out.

One a side note, it’s also taken us this long to realise that director Christian Ditter, whose previous film was the far more unbalanced Love, Rosie, just has this particular style of direction, the kind that tends to be a little annoying with its constant camera movement and awkward staging – there are scenes where characters like Rebel Wilson just appear right out of nowhere in the middle of a scene she wasn’t even in up until then – as well as inappropriate song placements, though the ones in How To Be Single are nowhere near as infuriating as the ones in Love, Rosie, which actually had a scene with a character in the midst of childbirth with Salt-n-Pepa’s “Push It” on the soundtrack (groan). Much like with Baz Luhrmann, some will be entranced by this style, others will be a little aggravated by it – we’re honestly the latter.

It’s not like How To Be Single is avoidable, but when it lacks the consistency you want from a film like this, then it’s a little disappointing all the same.

How To Be Single is wholly decent when it actually tries to achieve what it wants to achieve, but is bogged down by two unnecessary and even contradictory sub-plots that rely way too much on formula for the overall film to really stand out.