House of Gucci (Review) – A Fashion Dynasty To Die For 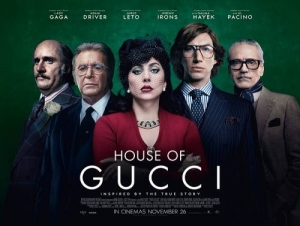 Although Ridley Scott’s going around blaming millennials for the box office failure of The Last Duel, he should count himself lucky that he’s managed to release two movies in 2021 – first The Last Duel, and now House of Gucci – that are among the director’s strongest, and certainly most entertaining, work in years.

House of Gucci, in particular, is a vastly enjoyable historical saga that somehow manages to mix the mafioso family dynamics of The Godfather with the fashion sense of The Devil Wears Prada, which in and of itself makes it the most fashionable crime movie in a long time. Beyond that, though, it’s an interesting tale of manipulation, deceit, and eventually murder in an ugly world of wealth not unlike the one seen in Scott’s 2017 movie All The Money In The World, told with a neatly restrained amount of camp and passion by the director and his super-game ensemble of actors.

The film begins in the 1970s when Patrizia Reggiani (Lady Gaga), the social-climbing daughter of a truck business owner, meets and eventually weds Maurizio Gucci (Adam Driver), a member of the famous Gucci family and the only son of the empire’s founder Rodolfo Gucci (Jeremy Irons). Patrizia becomes enamoured with the wealth and power that her husband and in-laws wield, including Maurizio’s uncle Aldo (Al Pacino) and his incompetent, wannabe-designer son Paolo (Jared Leto), and soon she begins clawing her way through the Gucci dynasty by pitting family members against one another and manipulating Maurizio into adopting tougher business practises in order to assert his dominance in the family business. However, when things inevitably turn against her, Patrizia makes a final stance which, if you know the story already, does not end well for anyone.

Playing like a Godfather-style mafia movie with the campiness of a trashy soap opera, House of Gucci sucks you in early on with plenty of larger-than-life performances that are lots of fun to watch. Lady Gaga proves that A Star Is Born was no fluke, and delivers a fantastic lead performance where the singer really gets to have fun playing up her character’s coarse, manipulative tendencies while making her (up to a point) oddly sympathetic as she begins turning people against each other. On the opposite end of the spectrum, you have Jared Leto under heavy balding-man make-up and strange speaking patterns that make him out to be this strange caricature right out of a Looney Tunes cartoon; nonetheless, Leto sinks deep into the role and manages to be entertainingly silly all throughout. Oscar-winning thespians like Al Pacino and Jeremy Irons are also having lots of energetic fun (with Irons delivering a great monologue about the absolute mediocrity of Leto’s character), while the likes of Adam Driver, Salma Hayek (as a psychic whom Lady Gaga’s Patrizia befriends) and Jack Huston (as business associate and future Gucci CEO Domenico De Sole) have really strong, even intense, moments to shine. Pretty much everyone in this cast is having the time of their lives here, acting the holy hell out of an entertaining script that Ridley Scott is also pouring his heart and soul into.

Scott’s direction is not unlike that of All The Money In The World with its grey, lifeless colour scheme and fast-paced storytelling, so much so that you could consider House of Gucci to be the second part of an unofficial Ridley Scott trilogy surrounding the ugliness of wealth (God only knows what he’ll tackle for the third film in this trilogy). You can tell that the explicit influence and power has turned these people into soulless monsters over time, with betrayals and back-stabbings aplenty as everyone goes head-to-head under increasingly unpleasant circumstances, which Scott does frame and pace similarly to a Godfather movie, but in this strange world of high-end fashion accessories. There are plenty of fun parts to the story that Scott focuses on, such as the discovery of fake Gucci handbags being sold in flea markets, and the unwillingness of the actual Gucci players to do anything about it since, in their mind, people are still technically buying Gucci products. Brief cameos from younger versions of Tom Ford, Anna Wintour and Karl Lagerfeld are also cool to spot, especially if you’re a major follower of the fashion world. Overall, Scott finds plenty of enjoyment in bringing these three decades to life, right down to the blissful soundtrack of 70s, 80s and even early 90s hits.

As fun as it is to watch, and I’ll admit that even though the movie is two-and-a-half hours long I did not check my watch at any point during the film, House of Gucci is perhaps a little too indulgent with its substance. It crams in a lot of story, and spends a lot of time on sections that might not move the plot forward as much as others, which can sometimes be detrimental as you have been invested for so long only for things to slow down and risk losing your attention. Particular aspects that occur over the film’s third act, including the fates of some very important characters, are largely glanced over and covered only by one-sentence text just before the ending credits, while you feel that more time could have been given to a major development which often seems to have come out of nowhere in the minds of some people. There are also parts of this movie that could easily have been trimmed down to make room for other things, including an entire section that takes place on a ski resort, or a very Godfather-esque scene that happens towards the climax, which despite some great plate-throwing action by Adam Driver does go on for longer than necessary.

On the whole, the movie is a lot of fun to watch, particularly for the over-the-top performances which become so delightfully camp that it’s hard to resist. While it’s far from perfect, House of Gucci is the cap on a pretty good year for Ridley Scott, even if he’s busy blaming millennials for The Last Duel’s bombing to really notice.

House of Gucci is an entertaining, if slightly indulgent, historical saga that sees director Ridley Scott get some fun larger-than-life turns out of the likes of Lady Gaga and Jared Leto, in a campy tale of manipulation and wealth that’s like a much more fashionable Godfather movie, and all the more engaging to watch because of it.

House of Gucci is now showing in cinemas nationwide – click here to find a screening near you!