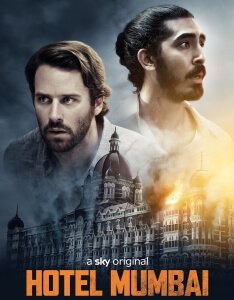 BASICALLY…: In 2008, the Taj Mahal Palace Hotel in Mumbai is attacked by terrorists, leaving the guests and staff to try and survive…

The devastating 2008 terrorist attacks throughout the city of Mumbai are remembered in India as much as 9/11 is remembered by Americans, so any movie depicting the atrocities would have to tread carefully without insulting the fallen or the survivors. Director Anthony Maras, here making his feature debut, proves to be up for the task, channelling his inner Paul Greengrass and Kathryn Bigelow to deliver a chilling docudrama that puts you right in the middle of the attacks that blindsided a nation.

Mostly set on the fateful day of November 26th 2008, we first see the unnerving shot of the terrorists, listening to audio from their leader known only as “the Bull”, arriving into the city via a boat. Afterward, we meet several of the staff and guests staying at the Taj Mahal Palace Hotel, including Sikh waiter Arjun (Dev Patel), chef Hemant Oberoi (Anupam Kher), British-Muslim heiress Zahra (Nazanin Boniadi) and her American husband David (Armie Hammer) along with their infant son and nanny Sally (Tilda Cobham-Hervey), and Russian businessman Vasili (Jason Isaacs). They are all serving and dining in the hotel when the attacks, co-ordinated to take place at several locations throughout Mumbai, eventually make it to the establishment, where the terrorist open fire on innocent civilians in the name of Allah. So begins a siege where the staff and guests must survive the brutal onslaught, until special forces from Delhi can arrive to handle it since the local police force is too unprepared for such an event.

The intent of this film is to make you feel as though you are right there in the middle of a terrorist attack, and Maras simulates the experience to an effective degree. People will just suddenly get shot right in front of others out of nowhere, and it takes them a second to comprehend what has actually just happened, before then reacting with sheer panic and dread as the blank-faced terrorists just start shooting. The hotel, effectively a war zone throughout most of this movie, is packed with gunfire and enough screams to send anyone into a state of complete dread and fear. Maras accomplishes the raw immediacy with shaky camera work and deafening sound effects to resemble what your own reaction might be if you happened to be there on that day in history, and he does it in his own style that certainly resembles Greengrass but has enough of his own voice to feel detached from that comparison.

Because the film is more about the moment than it is about the people going through it, this isn’t the kind of film where every character is fleshed out or given enough room to breathe; there simply isn’t time for any of that, because the main priority for each and every one of them is to stay alive by the time this whole thing wraps up. That does mean that you do get the occasional stock disaster movie character, like a racist woman who immediately assumes Zahra is one of the terrorists because she is speaking a Middle-Eastern language to her mother over the phone, but the actors they’ve brought on to play most of them, like Dev Patel, Armie Hammer, Nazanin Boniadi and Jason Isaacs, are all such great actors that they make their thin-on-paper characters seem more layered than they probably are. Even the terrorists themselves, as evil as they are, are surprisingly given many scenes that humanise them (or at least, the closest to humanity a terrorist could ever be), whether they’re expressing surprise at hotel toilets or tearfully calling their parents over the phone. Of course, nothing can ever remove the fact that they are agents of pure evil, brainwashed into obedience by their unseen leader who coldly justifies killing dozens of people in the name of Allah, and the actors that they got to portray these people are legitimately intimidating in scenes where they psychologically haunt the guests and staff throughout the hotel.

The carnage is relentless, almost overwhelmingly so, but Maras never intends to make any of it feel exploitative or tasteless; the passion to tell this story is evident, even if it means showing some truly bleak imagery of dead bodies and people jumping from hotel windows several storeys above the ground. For the majority of the time, it is done effectively and creates this truly unnerving sense of doom and gloom within every corner we visit, as if at any moment a gunman could jump out from nowhere and riddle you with God knows how many bullets. There are times, of course, when the movie slips into disaster movie clichés like the defiant staff who elect to stay and help instead of running for their lives, which admittedly do occasionally bring you out of the experience to remind you that it is indeed a movie that you’re watching, but when the rest of the movie is tense as hell and handled gracefully as well as in a way that holds your attention firmly, they are minor bumps that are easy to overlook.

Nobody should ever know what it feels like to be caught up in the middle of a terrorist attack, but Hotel Mumbai is perhaps the closest you’ll feel to living through it without actually living through it. You’ll come out of it feeling overwhelmed, struck with fear and grief, and thankful that you’ve made it through; I truly do hope that for anyone reading this, those feelings remain simulated.

Hotel Mumbai is a harrowing account of the devastating 2008 terrorist attacks in Mumbai, which director Anthony Maras effectively recreates with camera work and effects that make you feel as though you are in the middle of the carnage, and leaves you just as overwhelmed as if you truly were there.

Want to decide what the movie’s like for yourself?
Check out Hotel Mumbai showtimes in London
via