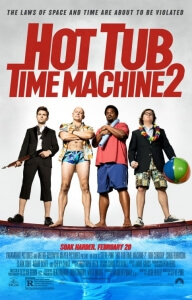 When you get a title like Hot Tub Time Machine, how can you NOT just go along with it? That’s what director Steve Pink and lead quartet John Cusack, Rob Corddry, Craig Robinson and Clarke Duke did with the 2010 surprise cult hit, and the result was a funny and tongue-in-cheek experience that, while not a masterpiece, did exactly what it was meant to set out to do.

This then begs the question, why the hell does Hot Tub Time Machine 2 fail so spectacularly?

First and foremost, there’s no real reason for this movie to exist other than the fact that the first film was popular with audiences and critics – it wasn’t a huge success at the box office, but made a decent-sized amount regardless – because the first film ended in a satisfying enough place for each four of the main characters with no extension needed. Each one of them got their happy ending, and that was that.

Sadly, because our main characters – bar Cusack, whose Adam is unceremoniously written out of the movie to accommodate for Cusack’s own no-show – are now wealthy, successful and equipped with a larger sense of power they are far less sympathetic than they were a film ago. Corddry’s Lou, for instance, has gone from a suicidal wreck to an aggressive, egotistical rich rock-star/”father of the Internet” including outlets named Lougle who abuses his power to no end – he even forces his mistreated biological son, Duke’s Jacob, to dress up and act as his butler. It’s no wonder someone tries to shoot him early on in the nether-regions (the first of many instances of testicular trauma this film dishes out), because honestly if you had the power you would do the same; this guy makes the Wolf Pack in The Hangover look like saints by comparison, he’s that much of a punch-able douchebag.

Secondly, the needless existence of this sequel means there are not that many strong jokes this time round, with a heavy chunk of them coming from the main trio’s obviously improvised banter (even Judd Apatow would be telling them to stick to the script) that would be great in a line-o-rama featurette on the DVD but constantly within the actual body of the film gets irritating after a while. It also becomes clear that they are clearly aiming for the lowest of the low with enough dick jokes to fill a Ray William Johnson video, lazy callbacks to the first movie (a fourth-wall breaking “gag” here feels unnatural and forced as opposed to how it was done before) and nasty attempts at media satire. The latter comes in the form of futuristic game show “Choozy Doozy”, where audience suggestions eventually lead to virtual rape – and it’s the highest-rated show on television in the year 2025. This could work if there was a bit more thought put into the obvious satirical element it desperately wants to convey, but when it starts to go into a homophobic area regarding the people involved it just becomes hateful and mean. The fact that what is essentially rape equals high ratings is disturbing enough, but when it paves the way for lowest common denominator anti-gay feelings it’s just poisonous.

What makes it all even worse is that this is almost the exact same crew that worked on the first one who made this film, not some other studio hack brought in to carry out the studio’s every whim. Director Steve Pink, writer Josh Heald, and most of the cast bar Cusack were all willing to go in and make an inferior product that had no reason to really exist in the first place outside of audience popularity. You have to wonder if out of all of them, Cusack was the smarter one by deciding NOT to return, because everyone just embarrasses themselves in an orgy of hateful banter and crude, bottom of the barrel humour that borders on repellent ugliness. Why these willing participants, who had previously made an imperfect but harmless and charming comedy, had decided amongst themselves to make a sequel that was not only far worse than the first but morally repugnant enough to turn off external audiences (it’s a massive bomb Stateside, both critically and financially) is anyone’s guess and everyone’s shame.

We’d finish by saying that Hot Tub Time Machine 2 makes you want to go back in time and not see this movie, but let’s face it – you’ve probably already done so in your head. We don’t blame you.

Hot Tub Time Machine 2 is a vastly inferior comedy sequel that delights itself in its nasty characters, hateful banter and repugnant humour, whilst failing to delight anyone else.