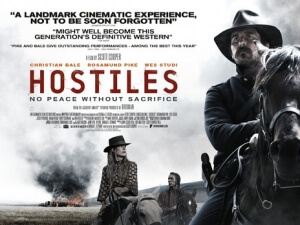 BASICALLY…: In the late 1800s, an army captain (Bale) is tasked with escorting a dying Cheyenne war chief and his family back to his tribe so he can die in peace…

Not five minutes into Scott Cooper’s newest movie, a family is completely butchered by Comanche renegades; the father is scalped, the children – including a newborn baby – are mercilessly shot dead, their home is set ablaze, and the sole survivor is Rosamund Pike who, worst of all, has to now live the rest of her days without her husband and children by her side.

But as bleak and grim as this opening situation may seem, we then see it switched around in the very next scene with Christian Bale’s Union army captain Joe Blocker watching without remorse as a Native American man is dragged along the road by his men’s horses while his family wails as they watch. In these two opening scenes, the dour tone is set firmly in place, as is the set-up that, in this story, there are no real good guys; just two very murky sides of an exceptionally dirty coin, who over the course of their journey must learn to not be so grubby and driven by their own darkness.

It’s part of what makes this an exceptionally gripping watch, and is quite possibly Cooper’s finest work to date, or at the very least his most emotionally satisfying.

The story kicks into gear when Bale’s Blocker is tasked by his superiors to escort a dying Cheyenne war chief by the name of Yellow Hawk (Wes Studi) and his family across the plains to his tribe so that he may pass away in peace. Trouble is, Blocker absolutely hates his guts, and at first fiercely refuses the order given his pure hatred for the man responsible for so much grief for him in the past. Naturally, he later begrudgingly accepts the mission, and along with a makeshift party of a dozen or so soldiers sets out with the imprisoned war chief and his family, encountering Pike’s traumatised frontierswoman along the way, as well as danger from several sources, from ruthless Comanche riders to slimy fur traders and beyond.

Like Cooper’s two previous movies Out of the Furnace and Black Mass, the bleak and shockingly violent atmosphere is present all throughout, and just when you think for a moment the veil has lifted and we can finally get some light relief, it suddenly doubles down hard with bodies falling left and right, and pure examples of how terrible people could be in this time and place. Long monologues from characters also give us a glimpse into their wounded souls, and none of them seem to have an ounce of humanity or even compassion left in them to spare. It is a very bleak movie, no doubt about it, but stunningly there is a glimmer of hope and optimism buried somewhere in there which, when necessary, is utilised so well that you’re relieved that you’re not watching a complete bummer of a movie from beginning to end.

A large part of that glimmer has to do with the arc that the central character is given, and how the actor delivers this transformation with powerful poise and understated restraint. Bale is one of those actors who, when given the right material to work with, can transform a two-dimensional character on paper into something far more complex and nuanced, and a character like Blocker is no exception, only in this case it allows the actor to be stronger on-screen than he has been in quite some time. He plays someone who has seen so much grief, so much bloodshed – mostly at the hands of the numerous Native American tribes he has been tasked with subduing and imprisoning – that he starts out this movie with nothing left for him to latch on to, except his overwhelming hatred and anger for the “savages” that have caused him a majority of his problems. As the movie goes on, he continuously sees the humanity in the very person he refused to help in the first place, and it starts to have a much more positive effect on his well-being as he becomes more and more understanding to this chief’s plight and his simple desire to return home without causing any more grief to anyone. It’s a great arc for an actor like Bale to morph into something truly cinematic, and he delivers a raw and unflinching portrait of a character so consumed by his own anger that he cannot seem to find the good in most people anymore, until he is given a glimpse of optimism that ultimately makes his story not just one of redemption, but also one of self-reflection and how he can spread goodwill to others who need it.

It’s masterfully acted by Bale and the rest of the ensemble cast, Cooper both writes and directs his scenes with appropriate bleakness that makes for some seriously compelling viewing, and cinematographer Masanobu Takayanagi manages to capture some truly stunning visuals of the barren desert landscapes and gorgeous red sunsets. It’s a fantastically crafted movie that is definitely worth watching on the big screen, although if you’re the type who would easily become impatient with slow-burn Westerns such as this then you might easily find your concentration wandering a little bit – but for those that stick with it through and through, you’ll find that this is a compelling and stunningly made movie that may be bleak, but still manages to offer that little spark of optimism right in its pitch black heart.

Hostiles is a compelling and beautifully crafted Western which certainly carries a bleak and dour tone all throughout it, but is also writer-director Scott Cooper’s most emotionally satisfying film to date with a strong script and direction, as well as a thrilling lead character arc that’s brought to life by a fantastic Christian Bale.